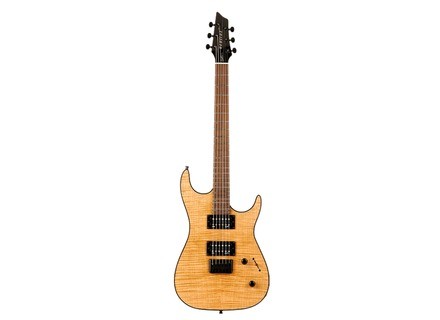 Redline HB, STC-Shaped Guitar from Godin in the Redline series.

After some modifications, this guitar is a dream.
While the handle is not worthy of a Fender U.S. but for the price no complaints, the finishing is very neat.
The mechanics are not moving, the tuner is a big plus, a push-pull on the volume knob mutes and displays the note using small LEDs.
The fixed bridge is also significant to my level no-brainer with the string change noted that the strings through the body
The mods I've done pretty quickly:
change a lot of micro seymour duncan Air Norton / Tone Zone
A push-pull knob for the pickups split single
A mechanism for the Hipshot Drop-D (I'm not completely satisfied, but nothing to do with the guitar).

So I currently play with a head Blackheart 15w and my pedalboard (see my profile for more details). Well, I'm happy with the sound, this is not yet the Son but change my amp will probably reach the Grail. After difficult to talk about the sound of the guitar itself knowing that the rest of the gear is also very much but for my style (pop / rock or metal) it suits me very well and it is still quite versatile.

This guitar is my # 1 (not at the same time a large collection) and I am very pleased considering the price. So yes it's not a great guitar, but in view of the finish, the playing comfort and price I can only put a 9/10.
If I had the choice again I will not hesitate
Did you find this review helpful?yesno
»

I do not have the latest model, it integrates a tuner activated by one of two knobs.

Note that despite the presence of passive pickups, the guitar has the location of the battery / battery directly accessible at the back of the guitar without disassemble for active pickups (very good point that).

The guitar is neither light nor heavy, fairly balanced and not tiring to play.
Knobs volume / tone controls are accurate and effective. selector pickups is a bit low for fast open game, we tend to touch a knob at the same time and it is a little hard (you need a good flick to make it move).

The handle is, according to Godin, type fast "something" (I do not remember how it's called), well that's right: the neck is fast and very pleasant. It has a rounded shape that makes it fits in the palm of your hand. Its texture can go fast.
Access to acute, however, could be improved. I have small hands and I'm a little embarrassed by the liaison body / sleeve prominent tease to go from the 20th box.

The tuning between two sessions of play seems to move a lot, but once it is re set it does not move during use.

Microphones godin this model (the redline 2 and 3 are EMG), are in my opinion the weak point of this guitar. Not that they are bad, but they lack personality. Unlike micro bridge / neck pickup is not as drastic as it should in my opinion.

Apart from that, the sound is good, I wish the pickups are splitable. it would have expanded the range of possible sounds.

I bought this guitar because going abroad for 1 year, and have not brought one of my shovel, I missed playing too. I wanted a guitar within a reasonable budget, but that is not moldy either. Most tests and review of the series were rave redline. I came across a scratch that sold a OCCAZ but never used (he had won in a contest shred), so I jumped at the Cygnus. And I do not regret it. I really wanted a guitar a fixed bridge for me not having to type a set of imitation floyd on a low-end scratch. Well, I'm not disappointed. I had planned to sell it before returning to France, but in the end I think the keep.

If I had to do it again, I would not hesitate. For this price, the quality and finishes are hardly beatable. At this level it also beats the much more expensive guitars.