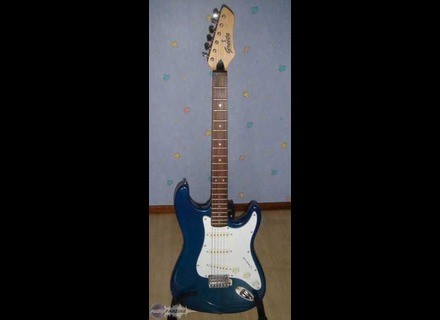 remitrash21's review (This content has been automatically translated from French)

Greeta Stratocaster
5
Hello,
I want to quickly acqurir this guitar, but I would like to have an opinion on it knowing that I am beginner.
I have the opportunity to buy it for 59 (new), I think I should not hsiter but can you tell me more.

THANK YOU FOR YOUR ATTENTION

Is the handle enjoyable?
- The access to acute (desti- nations most recently freight) is it easy?
- Ergonomics is it good (in terms of shape, weight ...)?
- Gets it easy to sound good ...?

Appropriate are your style of music?
- With what (s) amplifier (s) or effect (s) do you play?
- What kind of sound you get and with what rglages ("crystalline", "bold", ....)?
- What are you sonorits prfrez, you dtestez?

How long have you use it?
- What is the particular feature you like best and least?
- Have you tried many other models before acqurir?
- How do you report qualitprix?
- With the exprience, you do again this choice ...?
Did you find this review helpful?yesno
»

finalkev1's review (This content has been automatically translated from French)

Greeta Stratocaster
4
This guitar comes from Asian countries.
- 21 frets mdiums
- 3 micros simple non noiseless
- The bridge is a simple vibrato as on all entry-level guitars, which pretty dsacorde
- 1 volume buttons, 2 for Tone (serious, agus), a microphone slecteur five positions (one handle, handle + center, one center, center + bridge, one horse)
- Handle a C-section, it is quite late, but not as much as Ibanez, key parat be rosewood, for against the wood of the handle it&#39;s weird, it is flexible trs , so that we can do without forcing tremolos by pressing the head, as if c&#39;tait plastic, except that it is wood, since we see some ribs

The handle for an entry level guitar is plutt well, there is no problem to put an agreement or soloing. When I rcuprer, after a few weeks of play, I just rergler (handle, microphones, harmonics ,...). The strings are rgler to be the limit of the crimp (low action), this Manir the handle is enjoyable, not tiring at all. in terms of Access in agus is not as simple as a SG, but it&#39;s not bad, the form requires strat is easy until the 19 I frets, the heel of the neck APRS ESG a little, but good for me I do not care a bit since I&#39;m not going down l. Against this damage by finishing a problem comes a little Drang. The low E string tends be on the edge of the handle on the Premire frets because of the pice that is at the top of the handle is set too high on the handle.
Otherwise it&#39;s ergonomics standard, the form layer is useful since the guitar is standing balance for the game, and is well suited for the game sat. She is not heavy, I can easily play three hours with no problem.
APRS to obtain a good sound, I think mainly it dpend amps. I can say that even when the knobs are effective means really the diffrence with the tone controls, which makes it easy to sculpt his sound without the amp rgler. The slecteur 5 positions is a little low, it would have a small silent cm more prs strings t have a nickel. It&#39;s a bit hard, and you do not feel well trs notches. Now we will move to the sounds obtained ...

First I play rock, ska, some punk, a bit of everything actually, but c&#39;tait but three main styles. I use an amp drive CD-R 200, so 30 watts rms, it is a bit tight for a BPS with acoustic drums, electronic drums, but with Sufis. I use a few pedals for tube overdrive in order to behringer cruncher, and choose my channel at the base (clear or overdrive), which also allows me to boost my sound a few times.

Clearly the guitar sound good, although the rgler gus are soft and shine, even if the bass guitar that is put forward. The Submitted mdiums are a little creuss compared to low and Agues. In short, the sound is clear, it is enjoyable.
I mainly use the bridge position that can do a bit of funk with his slam, and the bridge + center for a more acoustic. Finally the microphones sleeves offer a more serious and more pais.

In overdrive with the pedals, it&#39;s really good.
Bridge position: It&#39;s crunch without drooling, it&#39;s lightweight, a bit aggressive but just enough for the punk, rock, and powerful, and agus do well without being garish. That&#39;s what I find is really good.
Neck position: It is much more serious, more blues, simpa to some roots alone.

APRS in distortion with the amp, it&#39;s not too bha his thing, it can go if it&#39;s not push too hard, but it soon becomes little prcis, and notes stands out less. A play in the bridge position for a more sharp and more prcis and avoid his drool too much.

If not gnrale sounds dlivrs by the microphones are medium-good bills, which is good for a guitar of this price. They have a few harmonics, and is largely reasonable (and sufficient) as we are not in the disto type mtal or hard rock.

I use it recently prs 6 months, I just acoustic folk and classical. In beginners, it rgler not silent at all, I put the hands in, and is fine now.
I like the crunch sound, and clear sound, basically for which it is made.
This guitar I have not bought it. It fesait a year and a half as a friend I had ERRF prter. I do not know how many years it has, since before she apartenait ERRF to the friend of my ERRF. Before I tried the guitars of friends (SG storm, storm copy of strata, hohner Rocksound pro, and a few others I can not remember the names), and a few guitars stores (split telecaster lite ash, cort , ibanez ,...). Bha in any case it is more comfortable than the storms that are the guitars in the same range, and better handle the cort, and the sound resembles that of the hohner.
For the price quality ratio, compared to the bargain price of 100 Audiofanzine, I think it intrssant but it will probably the rgler. This is a beginners guitar that does well on clean sounds and crunch, with a handle enjoyable although parat flexible and that the manufacturing quality is average.
With exprience, I would do not have that choice as a guitar I would buy more "high end", and of course a mark (G & L Tribute S-500 SERIES or AST spcial) but if I see it in a store and I am the seller, and a person in the beginners guitar wants to buy an electric, I&#39;d try on many storms and Staggs and Squiers, but above this Greeta who is doing well.

jossleskater's review (This content has been automatically translated from French)

Greeta Stratocaster
4
It has three microphones simple.Le neck is mahogany. 21 frets. a bridge ... I do not know the name ^ ^.

The handle is enjoyable and trs ACCS to dernire frets is pretty easy I think!
I like its shape but I had more cons by lightweight, but it is easy.

Yes you can play with any (variation on rock, mtal, blues ...) I play with an amp vantage vr15 g I do not know how many watts'^_^'. The sound is clear but the others are a little less ... I bie play but also with clear distortion.

Frankly a good scratch trs for beginners like me, an enjoyable round, a suitable form, trs a good clean sound and not bad to distortion. First electric guitar is m and I sui proud, I is progressing well with! It does not cost much more trs then it is all available!

maguitare's review (This content has been automatically translated from French)

Greeta Stratocaster
5
I can tell you with certainty that this guitar come from India.
I've seen has disassemble the handle there was tattoo on INDIA body.
So much for the little story

Mine has the translucent body polish and I am tempted to say that the copy of FENDER expensive and that is why I just buy it elsewhere.

Channel pleasant, at least we do not s'arranche fingers during RPET.

It happens to have very clear sound chouettos and did not much envy the greater. I'll leave the microphones origins for once

Otherwise the guitar is well balanced and pluttlgre.

Zik me who loves funky, it's nickel.
My guitar vibrates a little 15W amp marshall and he loves to.

Obviously those are the sounds of a stratovolcano and is not hard to make, though it fared poorly in his not saturated.

It's been two months that I have and it's really worth it.
It is a guitar that the former owner had bought the 1500 francs era (230th)
I therefore put him 9 / 10 because this rate I do not get any better.

I do not regret my purchase and it is a brand that deserves to be known better now but I think they are not even certain that the public budget.