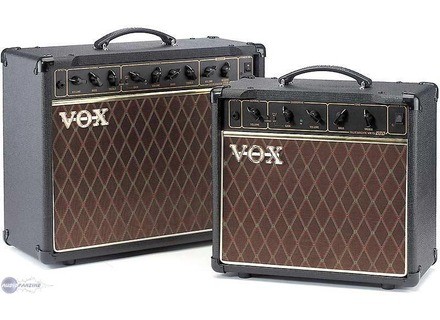 fafgreg's review (This content has been automatically translated from French)

Nothing more simple, you plug is lighter and its fate after small glow lamp of course ....!
There is a manual supplied, but it's just to decorate ...

I play U2 bcp Vox sound so necessary and I'm not disappointed. Whether with a Les Paul or a Start, the sound is excellent for the price! There is a choice between a clean sound, a sound or a crunchy overdrive rather more muscular and in all cases the heat of the tube preamp is present and the Vox too! I never pushed the volume to more than half, he has made something like a 30W transistor amp!

I for 1 year and I am delighted.
This is an unbeatable value for money in addition to a legendary brand like vox.
The design is a little vintage that did not hurt.
Excellent amp, I highly recommend it.
Did you find this review helpful?yesno
»

moskitopm's review (This content has been automatically translated from French)

Vox VR15
5
Amplification-hybrid, a lamp is situated at the very beginning of the amplification circuit and transistors amplify all that

An entry-jack in front, behind a footswitch output (note that my footswitch marshall my G50RCD stepped on), one HP port, a headphone

A volume-control for the clean channel, volume and gain for distortion and an acute and serious for both channels. More a button / light distortion and crunch / overdrive. No effects or reverb

Yes, we can not make more clear

"I try to play everything, I love the blues, rock, ... It suits me thoroughly! Even for heavier styles it goes, even if it's not done too much for the base!

-I play with a Epiphone Les Paul Custom. It makes great with it almost becomes crystal clear! I have not tried it with my Lag Rockline Avenue but it should give! I tested it with a fender telecaster and there was great US!

-The law is very clear sound, very crystal-clear and has a nice "color". The distortion, very special, is in exellent crunch with a high volume (with a big muff is the Apocalyspe!) But when you put the heavy distortion it gets a bit messy if the gain is too high. For the blues with the tone of the guitar down, it's wonderful, especially for solos.

"I love the clean and crunch, especially when the amp is pushed (from a quarter of the volume). The large distortion marks just the limit of this (exellent) amp.

I use it for three weeks!

-I love its small size, his mouth and sound! I compared with an AD15VT and there's no photo, I took the VR15

-I have tried the AD15VT. But I also have a peavey classic 30 and it has next to nothing to be ashamed. I could also play with a friend who has a Marshall dsl 401, it has nothing to do like his, but he stands up very well!

Yes, yes 100x!
Did you find this review helpful?yesno
»

Vox VR15
4
This is an amp though mconnu rcent (bought last year), prampli transistors, but Tage power tube circuit spcial mimicking output transformer and varies impdance HP.
As this is a lamp AX7, the few milliwatts gnrs are then amplified by a conventional chip power transistors. It sounds complicated but it gnialement simple, and can be varied by changing the rendering pipe.
Big 15 watts, 2 footswitchable channels, no loop or reverb, simple and effective.
The vox is typically qualiseur, turn the treble and bass ca enlve, disarmament and not super effective in fact. The two channels will share it, it's not cool, not to have a good clean sound and good sound saturax.
Speaker output (the original cut), line out headphones and footswitch.
Two points for the loop, one for the reverb, two for common qualiseur, bam.

It's pretty simple if you do not want that type of sound to the crunch and saturax eg.
Channel 2 has a button that boosts the sound and tighten, almost metal. And the channel to a tab is crunchy.
WHERE IS PLAYING WITH STRONG! For there is no master volume, zero point.
The magic of the tube circuit only starts up when you push the volume that otherwise nothing happens, a marshall mg is just as well.
So a product like his ironic ERRF AD15VT elsewhere: on the small achte home to play softly and it sounds good that corner ...
However, an internal knob prs radiator reduces the power of 15 6 watts is better dj.
4 points for the master volume, REPAF

To the sounds obtained by using it properly, be strong: it's great ar ractif touch, going from light crunch trs course still plays and volume. No photo, it is the natural compression of tube power. By the way, the original is steep and pabopabo rch. A soft tube (low gain) gives much better rsultats. Like in real 6v6 amps ...
The game appears to fingers trs good compression always natural ...
Short for what it is If you are not too pnible is a great toy this Vox.
I also 30watts, more versatile and playable slowly, paradoxical.

A hose if you do the 15 watts on the market okaz and you want to play softly rglez internal pot sweeter, and install a stereo attnuateur just before the speaker.
The mouth of this amp is top notch, the sound is good, and it is a more remote channels. Rverbe for the bathroom is in rpute blueseux ...
Much better built than I vr30 possde also, more directly, too. Normal is less mess in it!
On a big box is not better even if forcment ca throws. Open a 4x10 vox vr15 fits well.
Voil good surfing!

coldrob's review (This content has been automatically translated from French)

My opinion: the pramplification lamps is a big plus. We would have loved a Second Entry or between micro and more and more precision in the legalization of tones (eg rglage mdium) and above This rglage the spar for both channels. There is no effect, and it has stuck the o from the adt. Those (like me) who want a vintage ct will however apprcier. A little reverb (as on the MODEL 30W) t would be nice though.

Who can say of options and effects says simplicity of use, and it's a real pleasure. I can plug my guitar and play right away without asking any questions. Use the footswitch is advised and I also take one of two switches to better select the type of overdrive. I also like the heating time of the lamp, which is also Chram of this amp.
the sound is naturally good, only problem (which I do not put "only" 9 / 10), as said prcdemment the rglage bass and treble is a bit messy so it is difficult to get mdiums trademark riffs ...

For a player of rock, blues, in all its forms, sound british is miraculous, for the price. I personally use a Mexican Start over, as I have a compressor marshall effects (compressor makes really good with this amp), two distos boss (ds-1 and mt-2; Avoid to earn it the overdrive) and I intend to invest in a delay, a wah, a fuzz ... -Pedals simple advice for her vintage-.
Start with, honest, I can go to a clear and bright a little aggressive and powerful riffs saturated wishes. Well I'll try piphone + my sister above me has to make it even better.
In short, if you want the versatility within the rock, go for the adt15 watts, otherwise, for a more CHARACTERISTICS, vintage, contrlable, "true", head over to one of the other is although the quality of sound that has buried in me the ide of the acqurir adt15w despite ct practice effects. In my opinion the 20 euros more are not accidental.

I use it for a month and I do not understand how I met my 10w discount, it seems to have found "the" mid-range, ideal, crucifying a price competition. I RPET again I fell in love with the sound, really excellent. It is clear, never reach this amp the sound of an all-tube, but it rings true, living, love the ct chaotic, alive, genuine, and I have not spoken the design of which was my secondary lment of RULING: a resume of the legendary AC, which I parat much nicer than the coldness of grids mtalliques adt-even if I respect these amps.
I RPET, I tried the adt15w, a roland cube, a fender frontman, it's sprayed, even if the choice of the first two could s'avrer more prudent for beginners who have not yet found a clear style.
The report price is more than excellent quality: I did have as much power for my money, it almost sounds like one of those great amps, and to play flat, it's magic!
I gladly do it again this choice, the effects pedals supplmentaires can wait: the essential is not the base, to have a good sound in guitar and amp?
Did you find this review helpful?yesno
»
Read the 5 user reviews on the Vox VR15 »