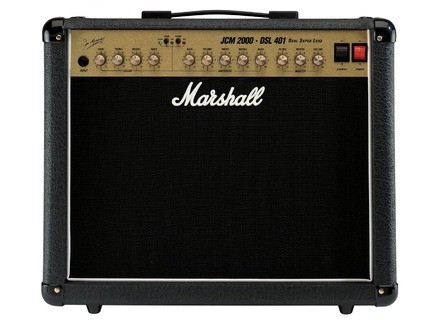 Marshall DSL401
5
I traded a Fender Bass Amp for this. The bass amp had a value of $400. Since I never played the bass, I believe I came out on top. This amp is awesome. And every one of my friends that hear it can't believe the full marshall sound that comes out of this little amp. Don't let the size fool you. It is heavy. But small enough to be able to move it around with no problem. And it puts out a awesome sound that will make the basement windows rattle. The clean channel sounds great. All around great amp.
Did you find this review helpful?yesno
»

Marshall DSL401
5
The Marshall DSL401 is a 4 x EL-84, 4 x 12AX7-powererd 1 x 12 combo amp that "officially" has two channels but really functions as a three-channel amp. The DSL401 has a clean channel and an overdrive channel. The DSL401 is rated at 40 watts and has a single 12" Marshall-designed 50-watt speaker specially designed to complement the DSL401. The Clean channel controls are simple: Gain, and the standard Bass, Middle, Treble controls. The Overdrive channel has the same controls and adds a channel master volume to allow you to better match the volume between channels when switching between channels. Then, there is an overall Master amp control section that consists of a Master volume, a Master reverb, and a Mix knob for the desired amount of effects coming from the effects loop. As noted there is an effects loop on the back with send and return controls. The FX loop is parallel, hence the Master FX control on the front. There is also a 1/4" speaker jack to connect an external speaker cabinet and there is a switch to choose between 8 and 16 ohms load. Even better, there is another 1/4" jack that is an emulated line out for going direct to a console or for recording, and in my opinion the Marshall emulated line out isn't half-bad. Other rear panel features include the mains input, fuse holders, and the 1/4" jack for the included 2-button foot switch that allows you to switch between the clean and overdrive channels, and switch between Overdrive 1 and Overdrive 2. The DSL401 is compact in stature and leads to a more compact, punchy feel, more than enough to play small-to-mid-sized venues, and larger venues either mic'ed up or with an extension cabinet. Overall, a great grab-and-go solution for when you have to have "that" Marshall sound.

I wish it had one more speaker output and a 4-ohm selection, but suppose that would be pushing it. If you need that much sound you should probably step up to the DSL50 head and 1/2 stack.

The operation of the amp is simple enough. There aren't so many controls as to make the amp difficult to use. The overdrive channel has two modes: OD1 and OD2. OD2 acts as a boost to OD1 and adds a good amount of gain to the mix, 20db to be exact, perfect for harder rock/metal or fluid leads.

In true Marshall fashion, cranking up the gain on the "clean" channel and pushing the global Master gets you that Marshall power tube saturation that just growls for days. It is conceivable that depending on the type of music you play you could crank up the gain and master and control everything via your volume knob. Beyond that, you have a myriad of tones available in this amp and are all easily accessible. The manual is downloadable from the MarshallAmps.com web site but I really doubt you'll need it. This is an amp that sounds amazing right out of the box.

I mostly play Neal Moser and George Riszanyi custom guitars with a smattering of Ibanez and others thrown in for good measure. If you're looking for a truly classic rock 'n roll sound, plug in a Les Paul and let 'er rip. You won't be disappointed. Personally, I'm a HUGE fan of what I call the EL84 "grease" that comes with the overdrive channels. I haven't really heard a bad note come out of this amp, no matter what I plug into it. Even at extreme settings the amp never gets too much bass or treble--almost like they put in controls to prevent people from self-destructing. Make no mistake, though, you can take this amp from a small club gig, plug it into a 4 x 12, and play the 'bowl.

Before the new DSL 40-watt combo launched I did a comparison between the two Marshall 40-watt combos: the DSL401 and the HAZE 40. They're two completely different amps. The reason the DSL401 is more expensive with seemingly less functionality is because it's a true Dual Super Lead amp. This is not a boiled-down version or any type of compromise. This is a bona fide Made in England Marshall DSL Valve amplifier. The DSL401 is a no-frills rock machine but can handle any type of music. Roll back the gain on the clean channel and you've got yourself an awesome Jazz amp. If there's a type of music you can't do with this amp I'd be interested to hear about it. I don't know if Marshall is exporting the DSL401 to the States anymore, so this may become a collectible amp as well--I know I haven't seen it's little brother, the DSL201 in some time so keep your eyes open, and if you're looking for a versatile Marshall platform, the DSL401 is hard to beat.

I've heard and read about others having thermal issues with the DSL401 but I've never had ANY issues whatsoever with my DSL401. I guess the message here is that your mileage may vary, but I've never had any issues and although I can say that I would gig it without a backup the truth is I never gig without a backup rig. However, I can't buy into the claims of issues with this amp because I've not experienced any of them. If you can get your hands on one, and you're a "Marshall" player, I'd get one without hesitation.
Did you find this review helpful?yesno
»

i love the sound it makes, other reviews of this unit note how dirty the OD2 channel is and thats why i like this amp. OD1 is good for some darker tones and the clean channel sounds sweet accourding to anybody who plays it.

after 2 - 3 years of on off flat out jamming the amp started cutting in and out. i got it repaired new valves, that did not solve the problem. it was as tho the unit did not have a constant power supply. over a month of backwards and forwards getting repaired a broken fuse holder, How the hell does that break.

ok i beleive it could be better, having the valves hanging cant be the best thing, when transporting it makes a fair few disturbing noises, dunno how fuse holder packs up??

i love it except for its fault, being my first quality valve amp if thought it would be constructed a little better.

Marshall DSL401
4
I got this off reidys.com for £388 because I wanted some good built in distortion in my amp...

I like the sturdyness of this and the way you can have loads of different distortions and clean tones. I play punk/emo which it is good for however its good for pretty much anything.

I dont like the fact its only 40 watts and that the palm muting sounds weak in the full on distortion mode but i'm getting a 1936 marshall cabinet for it and probably a boss gt-6 to back up the distortion.

This thing seems very sturdy I mean I havent properly tested it but I trust Matt Bellamy in that marshall are built like a brick and Ive seen him stand on the 1960 cabinet and still play through it and im sure they're all built to pretty much the same standard.

This review was originally published on http://www.musicgearreview.com
Did you find this review helpful?yesno
»
Read the 28 user reviews on the Marshall DSL401 »

Marshall DSL401 manuals and other files