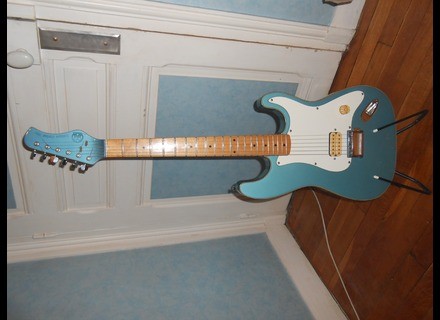 androu 94's review (This content has been automatically translated from French)

Hondo Stratocaster Deluxe 758
4
Difficult to determine the exact origin of hondo guitars; there s no official website and no n series on this guitar. Priori Asian origin, possibly core.
Ditto for the year of production, between 1975 and 1990 roughly 82 years ??. Should regain the era catalogs.
Easel kind wilkinson rather massive springs
Channel profile tlcaster type C; 21 frets.
Electronic Circuit simple: a hambucker and a simple volume button
One rglage, low in his clear and high sound overdriven Marshall Guv'nor (big black pedals).
This guitar is spciale as hybrid; the form of a Stratocaster, the handle of a tlcaster and body contours rights that are reminiscent of the American Fender Deluxe, a rock sound typ 70-80, daphn blue finish genre with great chestnut-cream binding.

The handle is very fine and pleasant; varnishes enough time protecting the pais good while confrant him ease of access that makes you want to play it.
As against it is its weight, at least as heavy as a Les Paul; Would consists of 7 layers of wood. We feel the solidity of manufacture.
The access to acute is the same as a stratovolcano, except that the neck has 21 frets.
For sound was not too rflchir; clear sound + or - Introduced in the baseline rglage, then to Del 3/4 of the knob a good saturation; the main group is dosed rglage its presence (+ or -), which leaves more time for rgler amp or effects pedals or rflchir the piece .dropoff window
From the 10th box, saturated obtained by way of very beautiful violin harmonics due, reinforcing its exceptional cost.

This guitar is Idale for rock or blues: Dire straits, the Stones and Led Zeppelin and Radiohead ... From soft mdium just a little fat saturation, it helps to make varied rhythmic and powerful solos as well as consistent (always mdiums).
I have not attitr amp I use the amps available in general a marshall jcm lamp type or fender lamps or a transistor; Starting from a standard rglage (gain slightly pushed in general + reverb) I dose volume knob with the sole disposal.
The range is narrower than other guitars (slecteurs + tones + volumes) but it is also to focus on the .. the final arrangements.
I use a saturation pedal marshall guvnor to boost if necessary.
When the sonorits, I love when she starts singing in the treble, it looks like she's talking about.

I use it for two years following a crush.
I have not tried other models, I fell across it.
This guitar is unique, it is almost a luthier guitar (except for mcaniques and wood used.
Its main default is its weight, like the Les Paul, standing pnible is long.
If I had the choice again it would be without hesitations; like the designers who mlangs diffrentes options for a very rsultat okay in the end.
I had not tried to hondo before, but if I have the opportunity to try other, I would do without prejudice.
Did you find this review helpful?yesno
»

Hondo Stratocaster Deluxe 758
4
Difficult to determine the exact origin of hondo guitars, there is no official web site and no serial number on this guitar. Asian priori, possibly Korea.
Ditto for the year of production, between 1975 and 1990 roughly 82 years??. Should find the catalogs of the time.
Wilkinson bridge kind enough mass spring
C-profile neck telecaster type, 21 frets.
Electronics simple: one button hambucker and simple volume
One setting, low level and high level clear sound kind Guv'nor overdrive marshall (large black pedals).
This guitar is special because hybrid form of a Stratocaster, the neck of a Telecaster and body contours are reminiscent of the rights Fender American Deluxe, a rock sound typical 70-80, daphne blue finish with such beautiful brown-cream binding.

The neck is very thin and beautiful, so thick varnish to protect it well while giving easy access that makes you want to play.
For it is against its weight, at least as heavy as a les paul, it would be composed of seven layers of wood. We feel the strength of manufacturing.
The access to acute is the same as a stratovolcano, except that the neck has 21 frets.
For his was not thinking too much; clear sound + or - according to this basic setting, then beyond 3/4 of a good knob saturation main group setting is to measure its presence (+ or - ), which leaves more time to adjust the amp or effects pedals or to reflect the piece.
From the 10th hut in saturated mode, one obtains beautiful harmonics due to the violin, which reinforces its exceptional side.

This guitar is ideal for rock or blues: Stones via Led zep or radiohead ... From soft to medium a little saturation a bit greasy, it can be diverse and powerful rhythms and solos consistent (always mediums).
I have not appointed amp, I use the amps available usually a marshall jcm type lamp or a fender tube or transistor, starting from a standard setting (gain pushed a little generally + reverb) I dose the volume knob with the only available.
The range is narrower than other guitars (selectors + tones + volumes) but it is also good to focus on .. the final arrangements.
I use a marshall guvnor pedal to boost saturation if necessary.
As for the sound, I love it when she sings in the treble, it looks like she speaks.

I use it for two years following a favorite.
I have not tried other models, I stumbled upon.
This guitar is unique, it is almost a guitar luthier (except for mechanical and wood used).
Its main drawback is its weight, as the Les Paul, standing is painful in the long run.
If I had to make this choice it would without hesitation, like the designers who have mixed different options for a very okay in the end.
I had not tried before hondo, but if I have the opportunity to try other, I would without a priori.