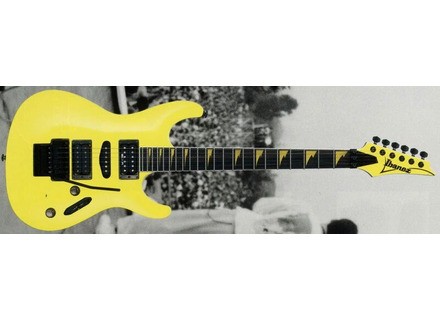 FGM100, STC-Shaped Guitar from Ibanez in the Frank Gamble series.

Ibanez FGM100
5
Before Frank got into his whole Jazz gigs, he was a monster shredder, and this guitar totally reflected upon that image. This takes the normal Ibanez S series and turbocharges it into one of the sleekest shred machines to have ever been created. The guitar has a mahogany body with a maple neck and rosewood fretboard, sharktooth inlays that were color matched to the body, Lo Pro Edge tremolo, HSH configuration with specially mounted pickups, AANJ, 22 frets, one volume, one tone and a five way switch.

This guitar is very, very cool. First of all, the frets had some wear, this is to be expected on a guitar that was so old. The wear could easily be taken care of with a quick level and recrown. The edges felt great, and they never cut your hand as you moved up and down the neck. The inlays had a little bit of filler in certain gaps, but it wasn't too bad. The coolest thing about this guitar is just the way it was made. Frank wanted a super sleek guitar, so he countersunk the pickups more than normal. On top of that, the neck and tremolo route are deeper than normal. This creates an effect that lets you absolutely slam the action without anything interfering. It's one of the most unique things Ibanez has ever done, and they've never done it on any other models (aside from Frank's), as far as I know of.

The guitar is super, super thin. Because of that, it's crazy light. Consequently, I find that the Ibanez S series don't sound quite as thick and big as some of the other Ibanez guitars out there. That said, it still sounded great for a shred/fusion kind of sound. The Bridge in this is the Dual Sound. That's basically just a Super Distortion. They sound kind of vintage-esque when compared to today's pickups in terms of the way the bass responds, but it is super high output and super fat sounding. It doesn't clean up too well, so don't expect to use it for cleans. The middle is an HS-3, and it kinda works, but I'm not a huge HS-3 fan. The neck was the most bizarre as it was an Ibanez/USA model pickup. It had a pretty cool sound going on for leads, but I generally prefer the DiMarzio equivalent.

If you can find one of these, I highly recommend checking them out. They're some of my favorite Ibanez guitars out there, and they're probably the ultimate shred machine for those looking for a guitar that's super thin, lightweight and built for speed.
Did you find this review helpful?yesno
»

jeremy_jazz's review (This content has been automatically translated from French)

Ibanez FGM100
5
Guitar made in Japan by dutemps ibanez guitars and it was amazing was the quality.
22 boxes with very good frets. Good ibanez pickups with large output level MSM. Possibility to change them for others to further typify the sound of the guitar.
floyd rose type bridge. nice volume knob and tone.
Channel ultrathin trs and enjoyable even for people not used to the TRS sleeve slim.

Channel ultrathin trs and enjoyable.
The ergonomics are excellent. Ibanez has really found the ultimate outcome of the form stratabound.
Guitar slight trs. in addition it is well equiop (microphones, mechanical, floyd) is any reliable a.

Versatile guitar (see config microphones). Does she conceived for Frank Gambale qu'ellle meaning you will sound clearer jazzy (micro severe) to see the rock metal like Frank (micro acute) or funky (single microphone in the middle) high .... So versatile

I use it for 10 years, she has not moved. I have tried many guitars (fender, gibson, tom amderson ...) before finding the guitar polyavmente and with the personality.
Good qualitprix The guitar was worth 15,000 Frac its output. The guitar still score a 1100 E 1000E (see www.guitareelectrique.com) because it has not aged is also sought after by collectors. I wish you all to find a guitar like that ......