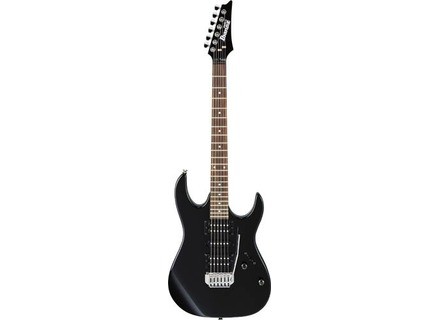 GRX170, STC-Shaped Guitar from Ibanez in the GRX series.

Ibanez GRX170
4
Got this as a second guitar for gigs/teaching from amazon. I'm on a fairly tight budget (which i seem to spend all of on musical stuff), and paid 160 quid for it.

Fairly good sound for the price. Good neck - easy to play. The wilkinson style bridge is a little better than the trashy strat copies that most super strats have. The colour ("jewel" blue, allegedly) is rocking!

The standard machine heads are horrendous. Kluson style budget copies that cost about 3 pounds from most instrument shops. Swapped them for some grover locking tuners that i had lying around. The tuning stability and intonation had to be set up properly when i got it, because the thing just wouldn't stay in tune, and the 12th fret octaves were totally out, but a bit of adjusting at the bridge sorted that out.

The guitar has a solid agathis body, which, although not the best, is a whole lot better than most cheap electrics. The hardware (apart from the machine heads) is all pretty sturdy. The neck is great - standard Ibanez 42mm width, which makes it easy to fret - especially when you're playing quicker stuff. The output jack has a tendency to come loose, but that happens to my schechter too, and that was a ot more expensive.

A pretty good guitar for the money. Don't expect it to be perfect, but with a little work, it'll be just as good as something 50 quid more expensive.

Ibanez GRX170
5
I Bought this guitar from a local shop in portsmouth,I got it because i herd it was a very good heavy rock guitar to start with, it cost £130, which is good cos it retais around £150.

I lke the balance between the body and neck, it provides flexibility whn playing.
As with most ibanez guitars the factory set up is very good. The guitar is well known for the amount of tones accessble for this price. The sound you get on distortion is mental!! It keeps you in your room for a good few hours the first time you plug it in.

The only bad thing is that you occasonaly get fret buzz, but other than that its perfectly fine.

The constuction of the unit is very good, ive dropped it on a hard wood surface before and all that happened is it came out of tune and got a couple of scratches, the balance is very good, set up and value is exccelent, stays in tune too.

Overall it is a great sounding, sturdy unit,with a good set up great balance and is a superb choice for beginner to intermediate skill and has great bang-for-the-buck ratio. So what are you waiting for...Go buy it!!

Ibanez GRX170
5
I baught this from the academy of sound in leicester for £190 english with a gig bag.

I love this guitar, i havent had it too long but from how long iv had it iv found NO faults or anything i really dislike. I love the way the bridge (tremolo) can be used like a whammy bar + with a whammy bar the strings actually come off the neck. The finish on it is fantastic, i have mine in a shiny blue colour, i also like the way that mine has different inlays to the normal ones (its a sort ov triange) I love the pickups (there are 5 by the way) and feel of the neck, i LOVE this guitar!!!!

Perfect, not a fault. every thing is honky dorey. (go on www.ibanez.com for specs)

If anyone is considering a new guitar, get this one, at only about £180 its a complite bargin. my friend has a gibson les paul and envys my ibanez! absoloutly brilliant.
Just read the other views to tell im not the only one who thinks its this good, they all gave it 5/5!

Ibanez GRX170
2
As a starting note I would like to mention that this review is from the point of view of a metal/hardcore fan, so I'll be concentrating on the guitar's ability to play "heavy" music

I started to play an accoustic guitar at quite a young age, but due to my love to metal music I just had to buy an electric. Anyways, without much research done, I went to the biggest guitar shop around and was offered an Ibanez GRX70 with an amp as a great beginner's set for a little under 300 Euros. I was very exited to finally get some distortion and the feeling to get that distorded sound from my own amp for the first time was purely amazing.

The neck of this guitar is awesome for playing metal and generally easy to play with due to the thin/flat neck. The guitar is also very nice to look at and doesn't weigh too much either, which is the case with most of the Ibanez.
There's no doubt that this is a first electric for anyone into metal.

In the end, it is a beginners guitar. I played with it for around three years, which was undoubtfully a too long time. I'm playing in a hardcore band and for my purposes the guitar is just not "heavy" enough, it's fine for jazz, blues, hard rock and some 80s heavy metal, but no good for extreme music. Although I must say that the accoustic doesn't really come across purely, without an effect, too well either.

I haven't really treated this guitar too gently and it's fallen to the ground a couple of times. It's generally stood the shocks, but there was one time when I needed to meld some of the cables inside the guitar back together as they had detached. But now it works well...
The pickups are quite horrible and not really worth anything, but, as I already said, alright for beginners.

Indeed my review doesn't give a too good overview of the Ibanez GRX70, but there's no doubt that it is a great guitar for beginners. My opinion has changed with time as my skills have developed, so if you consider yourself a good guitarist, or play in a band performing gigs, don't buy this.
So, as a finishing line: Solid guitar for beginners, but not sufficient for experienced players.

This review was originally published on http://www.musicgearreview.com
Did you find this review helpful?yesno
»
Read the 11 user reviews on the Ibanez GRX170 »