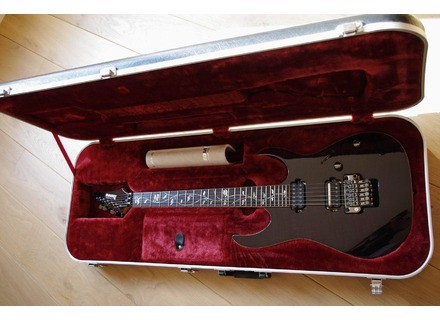 Ibanez JCRG8420ZD
5
The Ibanez guitars are great guitars for the budgie musician at hand. If you're looking for a very inexpensive but yet pretty well guitar and I'm as is definitely the tricks. They're very good price guitars and they feel very good as well. Many shredding and hard rock guys tend to lean towards these guitars primarily because of their very quick action fret necks. The neck itself is very comfortable and easy to play . Overall there are great guitars for someone he's learning how to play the guitar or just someone you need to nice comfortable shredding guitar.

This is not the budgeted Ibanez guitar but rather the custom axes that are better built and higher quality. These guitars come with to humbucker pick ups and nice pearl inlay design. You also have a run-of-the-mill volume control and tone control knobs. You get to pick up selectors well a tremolo system and that's pretty much about it. There's no boost switches or make cuts which is rain kind of push pull knobs of any kind.

These guitar sound fantastic any high gain/ highly saturated type setting. A Mesa Boogie guitar amplifier is perfect for these kind guitars because it produces a nice thick chunky tone which these guitars mix very well with. This is a smooth and fantastic guitar for pretty much any application.

At new you can find these guitars for right around $3400 which is a bit high for most Ibanez users. However, this is a professionals guitars and the price is aimed at that market. These are fun guitars and have a nice comfortable feel throughout the instrument. I recommend these if you don't want a custom fender or a Suhr guitar.
Did you find this review helpful?yesno
»

Ibanez JCRG8420ZD
5
Ibanez and DiMarzio have long been known for their tight relationship throughout the years. However, not everybody is a fan of DiMarzio pickups for whatever reason. Lately, DiMarzio has been trying to expand their line up and help build guitars for those who might want Seymour Duncan pickups. The guitar features a mahogany body with a figured maple top, a maple neck with a rosewood fretboard, a tree of life vine inlay, 24 jumbo frets, Edge Zero tremolo, HH configuration, one volume, one tone and a five way switch.

J-Customs are well known for their superior fretwork. The fretwork on these guitars just destroys almost everything out there. I can't think of many manufacturers out there that take the time to ball their fret ends as it takes a lot of time. However, the end result is totally worth it. They feel so amazing compared to normal fret ends. This guitar had the new Edge Zero tremolo. A lot of people go back and forth on the Edge Zero trem, and I can understand why. It's not a bad tremolo, but it needs to be properly setup before I am fully satisfied with it. I also recommend replacing the locking studs with better, older versions as it'll help make it stay in tune better.

This has the Seymour Duncan Custom 5 in the bridge and the Jazz in the neck. The Custom 5 is a Custom but with an Alnico V magnet installed in it. The Custom itself is already pretty thick sounding, but it can sometimes get a bit too bright in the treble region. The Alnico V helps cut this down and make it a bit fatter, but it's not quite as fat as the Custom Custom. Basically, it's a happy medium, and it works great in this guitar. The Jazz in the neck is a cleaner version of the 59. The bass is pretty similar, but the treble has been extended to create some extra clarity. It can sometimes sound a touch sterile, but it works awesome for clean tones.

The Duncans were a pretty nice touch in this model. It's something different for those who don't really like the DiMarzios that Ibanez always puts in their guitars. Sure, the Edge Zero isn't quite as nice as the previous trems, but it's still one solid tremolo. If I were to change one thing about this guitar, it would be throwing a 59 in the neck, but aside from that, it's just about perfect.
Did you find this review helpful?yesno
»