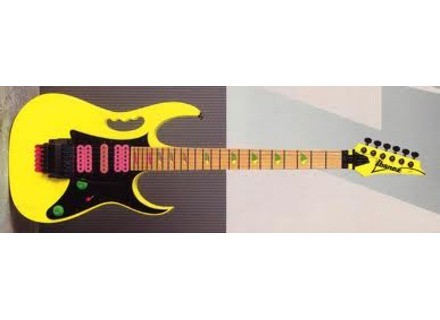 Ibanez JEM777 [1987-1996]
5
This is probably one of my favorite JEMs ever made. It is very similar to the RG550 that they used to release but with a few minor changes. Aside from that, in all honesty, it's pretty much the same. However, these get big bucks when compared to the original RGs back in the day. The guitar features a basswood body, a maple neck with a maple fretboard, 24 jumbo frets, unique triangle inlays, an Edge tremolo, unique handle cutout, HSH configuration, one volume, one tone and a five way switch.

The guitar had some wear on it, but considering this guitar is going on over 30 years old, it's not too bad. The frets were recently leveled, and although they were getting a little low, they still felt nice. The ends were perfectly beveled, and I could get some insane action on this thing without fretting out. The neck joint on this was the old school one, and it had some of those finish cracks that everyone seems to experience. However, it didn't have any huge neck gaps, so no issue there. The maple fretboard was getting dirty, and it looked absolutely amazing. I love the look of worn maple, so I was really bonding with this.

The guitar had two PAF Pros in it with an HS3 in the middle. The PAF Pro in the bridge is very nice. It's open and sounds great through most any rig out there. It's a touch too open at times, though. When I start playing metal, it gets to be a bit vintage-esque sounding. That can be a good thing or bad thing, depending on what you're going for. The middle HS3 worked nicely when it came to splitting with the neck/bridge, and I got some good clean tones with it. The PAF Pro in the neck was where everything really came together. It was clear, smooth and open sounding. It worked awesome for leads, and I'd rate it up there as one of the top five DiMarzio lead pickups.

The guitar is great, but expect to pay a pretty penny for one of these. If you can do without the fancy inlays, you might be better off customizing a standard RG550. However, the hardcore collectors out there will want to have the original, and this is what helped start the whole RG craze back in the 80s. Awesome guitars, and if you can afford one, go for it.
Did you find this review helpful?yesno
»

Ibanez JEM777 [1987-1996]
5
Steve Vai single handedly popularized the famous swirl, and this was one of the guitars that helped make that happen. The guitar has a basswood body with a maple neck, rosewood fretboard with 24 frets, special vine inlay, unique handle carved out in it, an Ibanez Lo Pro Edge tremolo, last few frets scalloped, HSH configuration, all access neck joint, one volume, one tone and a five way switch.

The swirl on this is really to die for. The one I'm using isn't the one in the picture, and I'm not sure why that picture is even in there in the first place. Regardless, the swirl looked awesome and really popped. The fretwork on this model was top notch, too. I was able to achieve nice, low action on this. The neck itself is a bit thicker than a normal Wizard, and I'm sure a lot of those who have issues with the normal necks will enjoy that. The inlay work was nicely done, and there weren't a lot of heavy fillers going on.

This guitar had some Breeds installed in it. The Breed bridge sounded nice and fat. I find that these work awesome for basswood. In fact, I have the Breeds in my own personal RG550. They're like very hot, powerful and middy PAFs. The Breed neck had some bite to it, and it helped it cut. However, it wasn't so bitey that you couldn't get a nice lead tone. They also split very nicely with the middle pickup. I was able to get those stratty sounds without any issues at all.

This guitar is one of the coolest, and it's also what helped revolutionize the entire swirl art form that so many people try to copy these days. They're generally high quality guitars that sound very resonant and already have good quality pickups installed in them. One thing to look out for are neck joint gaps and neck joint angles to achieve a nice pull up. Aside from that, they're pretty high quality.
Did you find this review helpful?yesno
»

Ibanez JEM777 [1987-1996]
5
This is a "made in japan 1989" model with an ultra slim neck ... unlike other models according to .... Pink FLU is beautiful .... and the flower of life on the handle makes this unique guitar at the first glance. It is equipped with EDGE, floyd house amrque as on satriani ... because the lo pro edge appear again later ... a little pink floyd high quality and stability ....
It includes 24 cases whose last scallopées! (21-24) which makes this guitar very well thought out! these are details that kill ... and makes this unique guitar ... both in matters of sound and playing comfort ...
In terms of DiMarzio PAF PRO are as Evolution are appeared after (early 90s) so it's the sound of STEVE DAVID LEE ROTH period / WHITESNAKE! Top end 80 90 ...

The handle is ultrathin ... super nice, satin finish, maple rosewood .... perfect for quick / shred game .... the weight of the guitar is pretty light, American basswood! access to acute is easy ergonomics of the guitar was great thinking this is a guitar shred is clear ..!!

For DiMarzio PAF PRO, they are classics of the brand ... are found on Satriani / paul GILBERT / sambora ..... and many more ... microphones ultra deemed to bass sound warm and round to perfection! and acute enough to send serious bite!
but the strength of this Steve Vai! this is a simple desktop .. which allows a choice of varied, funk, reggae, POP, and finally everything goes! great this is a professional instrument terrain; scene / studio ...

I have 12 years after the test with recent models of the time (2002) and now ... frankly the quality of the steve vai 1989 is just outstanding ... it is a true professional instrument! with quality IBANEZ 's this time ...
Did you find this review helpful?yesno
»