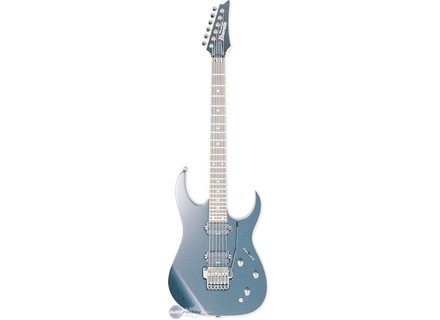 RG1620X, STC-Shaped Guitar from Ibanez in the RG Prestige series.

Ibanez RG1620X
3
The Ibanez guitars are known for very budget friendly instruments for the musician and hand. Most musicians that I've ever known how probably on a budget they don't have very much money. That's where these guitars come into play in that they are very good price instruments have a great feel and overall pretty good versatility to them. They're not very flashy guitars and overall don't look that appealing. But they're very good guitars for someone he's interested in getting to learn how to play the electric guitar or someone you need to shredding guitar.


Is guitar sound pretty good in pretty much any setting that you have a men. They're not very good at bluesy clean style guitar playing. But if you give them a loaded distortion or high gain saturation the nervous drive in that type of environment. I really like these guitars with the Mesa boogie amplifier because you get really thick saturated recto style of gain saturation which mixes very well with this type of guitar. Overall this is very cool sounding guitar for the money.


You can find these guitars pretty much anywhere you look for guitar related or instruments retailer. He could find my mind pretty easily as well which is a good source to find a used one or inexpensively priced one on the classifieds. These are fun guitars for anyone is looking to learn how to play the guitar for someone who needs a good shredding guitar at a budget friendly price.

Ibanez RG1620X
5
The RG-1620 is a piezo equipped model of the famous RG series. This model has an Edge Pro L.R. Baggs piezo equipped bridge, 24 frets, HH configuration, 5 way switch with volume/tone, separate volume for the piezo and a toggle switch to select between modes.

The guitar is super versatile thanks to the piezo bridge. It has all the same tones you'd expect out of a standard HH equipped RG, and the piezo allows for some great acoustic tones. For those that don't know, the piezo basically makes this thing sound similar to an electrified acoustic. To get the most out of this guitar, you'll probably want to have some sort of two amp and run one cable to a clean/acoustic amp and one to a normal amp.

The biggest feature everyone wants to know about this guitar is the piezo, and the piezo sounds great. It's an L.R. Baggs piezo, and it sounds fuller than some of the other piezo brands out there. Aside from that, it's pretty much standard fair for the RG guitars. Its basswood body, maple neck, rosewood fretboard combo leads to some great tones, especially if you're a shredder. The stock pickups are pretty bland, but they're not a huge issue to replace.

If you always wanted an RG with piezos, this is one of the models to look for. There's an RG-1820X that's a bit more versatile than this model, and if I had to choose between the two, I'd take that model simply for its extra tone pot. But that aside, they're basically the same guitar. These guitars are a lot cheaper than an EBMM JP, so if you're looking for a fully loaded JP for cheap, check out these guitars.
Did you find this review helpful?yesno
»

Ibanez RG1620X
5
Made in Japan, the basic characteristics are those of the RG Prestige at the time:
- Easel style house Floyd (Lo Pro Edge 2),
- Handle "Super Wizard" (incomparable finesse) in connection with three pieces screwed to the body and contoured for instant access to acute
- 24 jumbo frets,
- RG solid wood body with a piece
It is therefore an x20 2 microphones (double), namely micro house V7 (neck) and V8 (bridge) and it is therefore an Ibanez 5-position switch (Channel 2 round coils in parallel, the two , a coil race coil + 1 parallel bridge, trestle).
This is the 1620X so here is the originality of the piezo in the bridge! The sensors come from the preamp and LR Baggs home, not bad.
Settings: volume and tona general electrics and a volume for the piezo, the 5-way switching of the electrical switch and a 3 position for piezo only, electric only or blended 2.
For wood, it's solid sounding but can not tell you the species.

As already mentioned, the neck, body, and the junction make a guitar play where sections 17 to 24 (all strings) is incredibly easy.
The body is thick, hardwearing, but the forms are fine (RG, whatever) with the metallic color / glitter so pretty scratched. Maybe a little heavy in the long run, but nothing like a Les Paul, for example.
The settings are a model of practicality: it has everything at hand without being bothered playing.
This guitar is designed for hard rock / metal and microphones make it very well.
The output is twofold: two mono jacks (one for the piezo, one for power) or one (mix piezo / electric, as the 3-position switch). We use the two jacks quickly because the treatment of piezo is usually catastrophic with the normal guitar amps.
Note: you need a 9V battery to make it work (can not cut it). And change is not easy: you need a screwdriver! Hence the 9 and not in footnote 10.

As already mentioned, the basic sound is hardcore / metal, in all uses.
However, searching for sounds less typed, I replaced the pickups with Seymour Duncan Classic (HS-2 and TB-4) that allow me to play everything (from jazz to metal). And there is the walk!
I played with lots of different systems to amp simulators of any kind with pedals and everything goes well.
The piezo is "piezo", in that he must not expect an acoustic guitar sound. But connected directly or with appropriate treatment, it sounds good for a piezo or mixed with rhythmic electric, it adds a little something interesting.
Finally, another arrangement that I have made: I would have grafted a GK-3 Roland into a 3 voices (electronic, piezo and synth, so)
Rating: 7 it deserves for the lack of versatility of the original sound. on the other hand, it is 10 mics with my change!

I bought new in 2004 and still use it.
At the time I was looking for a 2 or 3 voices with vibrato and the market was very very small: this one, and a Godin XTSA Parker Fly Mojo. And the prices were a factor of two (Godin) or triple (Parker).
I have not had the opportunity to try the Godin sought, but another and Parker. Frankly, Parker flew over the comparative acoustic sound and it weighs nothing, and Godin had the advantage of the three voices (the sensor is integrated GK), but not so extraordinary characteristics (neck rather thick, somewhat heavy, the piezo as Ibanez or almost ...).
Surprisingly, I installed the same as the other 2 microphones and guitars so I can not compare the electric sounds, too close.
So for its price (1000 € at the time) it was an excellent compromise once the change of pickups made (for me). I would do if the price of Parker scares me (and if Ibanez had continued the two voices, which is not the case).
Did you find this review helpful?yesno
»

thepicks's review (This content has been automatically translated from French)

Rve RALIS a choice not regrtt. Guitar versatile enough for a RG, but it is .... and Luxury Class.
Did you find this review helpful?yesno
»