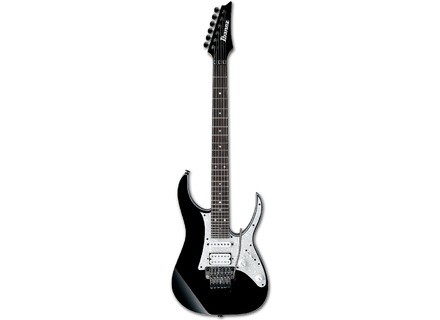 Ibanez RG2011SC
4
Despite what some people think, these "extra fret" guitars aren't anything new. Other manufacturers have done them before, but one of the problems was that the neck pickup was either not there or fairly weak. Ibanez set out to fix that. The guitar has an alder body with a maple neck, rosewood fretboard with 30 frets, dot inlays, an Ibanez Edge Zero tremolo, HS configuration, all access neck joint with super huge cutaway, one volume, one tone and a five way switch.

Despite this guitar having tons of frets, I have a feeling most people won't go that high. I have prior experience to playing these extra fret guitars, and it just gets too cramped up at the top. This is really no different. You end up tapping the higher frets rather than fretting them, so keep that in mind. The guitar itself was put together nicely, and I didn't experience any issues with the overall fretwork or anything like that. The upper access was amazing, so that was cool, but I found it looked kinda funky. It's definitely an acquired taste kinda thing.

The guitar had a unique pickup combo in it. The bridge is a Tone Zone, and this is the classic bridge pickup for Ibanez guitars. It has tons of bass and mids with some chopped treble. The pickup works best when you lower it a bit and allow its strong magnetic frequency to work a bit harder. It just starts to sound more natural, basically. In the neck, you have a True Velvet, and you could get some real cool clean and lead tones out of this thing. There's also some boosting or tonal change going on with some sort of preamp in this thing, but it's kinda hard to describe.

This is definitely a lead player's guitar. If you're a lead guitarist, you'll probably be interested in this, but it's kinda hard to get up to those higher frets. I also find that it looks a bit odd. I believe they're limited edition guitars, but I could be wrong. If they're limited, I recommend you buy now. Also, be sure to work on your tapping skills as you'll be doing quite a bit of tapping at the higher frets.
Did you find this review helpful?yesno
»

Published on 03/30/11
Ibanez introduces the RG2011SC-BK Extreme, a Limited Edition available exclusively in 2011.