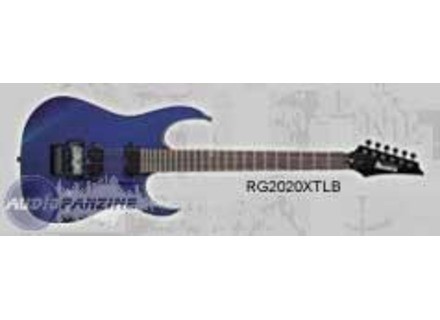 RG2020X, STC-Shaped Guitar from Ibanez in the RG Prestige series.

Ibanez RG2020X
4
This guitar has a special bridge in it that allows it to get acoustic-like sounds. This lends itself to being a very versatile guitar, although there are a few drawbacks with this model. The guitar has a mahogany body with a maple neck, rosewood fretboard with 24 frets, dot inlays, an Ibanez Double Edge tremolo, HH configuration, all access neck joint, one volume, one tone, piezo/mag switches and a five way switch.

The guitar was a bit heavy, and I'm not a huge fan of heavy guitars. I find that they don't sound quite as open as lighter guitars do. Aside from that, the guitar was pretty much on par with the rest of the Ibanez guitars out there. The frets were great, and the trem was solid. One thing about this trem is that it has some special crystals/magnets inside the saddles that allow you to get some of those acoustic-like tones at the flip of a switch. This lends itself towards being more versatile than the average guitar.

The guitar had the stock pickups in it, and they were pretty annoying. The stock pickups in these guitars are not that great at all, and I have no clue why Ibanez keeps putting crappy pickups in their guitars. The bridge was bland sounding, and it lacked clarity overall. It works fine for that mid gain and clean kinda tone, but they suck with heavy gain as they sound mushy. The neck is much the same, except that it's a bit bright, and I find myself reaching for the tone knob quite a few times. The guitar would benefit from a nice pickup swap, and if you have the extra cash, I recommend doing that.

With a pickup swap, these are some great guitars. They sound a bit thicker and meatier than a normal Ibanez, and I find that they're better suited towards metal tones than the normal basswood equipped models. That said, you'll want to replace the pickups as they're the weakest link in this. Don't forget that there are other mahogany models out there with the piezo bridge, so don't be fixated on this guitar.
Did you find this review helpful?yesno
»

morlock24's review (This content has been automatically translated from French)

Ibanez RG2020X
5
Manufacturing made in japan for this small series ibanez prestige.
Benefitted from the handle 24 boxes and finish prestige. It has two humbucker + piezo sensors molded into the decks of floyd (bridge Ibanez lo pro) connection: Volume + Tone humbuckers RELISA of a 5-way switch. Pernet of swich a pass mode which has a piezo volume. Possibility (thanks to two jacks) of branchr guitar on two amplifications another small swich can then pass the signals on one or the other output of the instrument.

The handle is finished in "prestige" which gives it a very enjoyable and gentle touch to the hand, so speed (it's a rgale). The handle is not fine enough for it to be as thin that a sword. ACCS Acute thanks to body shape and profiling of the heel is extremely ais.
to the form: c a fairly typical rock forms RG see donc.mais finishing shop "tlb" blue transparant with a bevel around the instrumet wood color finish gives a beautiful (all about got on well ... if we do not like the blue)
The sounds are very typ di Marzio (since the microphone is) so its rock trs. when the piezo it sounds pretty cool. and it was not the possibility to be able to mix the two sounds

I play the gutar a JCM900 with either pedal boss or a boss VF1. I am satisfied with the trs guitar and it suits all my expectations and made my style of music (enough rock, blues see metal). Only complaint is cold and the piezo synthetic shame not to have the possibility of the two shuffled sounds (electric and piezo) and not having a tone on the piezo MODEL.

I sit between the row or esp horizon, but being able to have his election and on the same guitar electro sduit me.
Did you find this review helpful?yesno
»