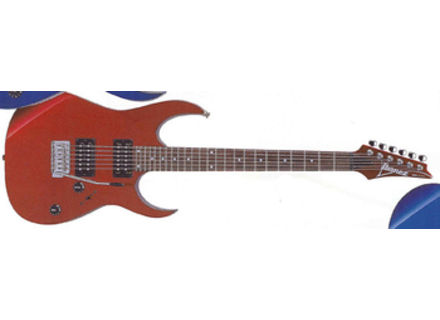 Ibanez RG120 [1998]
5
I bought this RG120 7 years ago when I was 16, I wanted to play guitar so bad and be in a band. I didn't have any experience in playing guitar, so I didn't have a clue in what to look for or what is good/bad. It's a solid red RG120 with 2 humbuckers. I bought it at Guitar Center along with a 15w amp, tuner, cable and strap for around $220 (the guitar alone was listed $199). I picked the Ibanez RG120 because it was cheap, and although knowing nothing about guitars I did know immediatly that I didn't like the thick necks on most brands such as Squiers. I really liked the thin fast neck, and the tone from the pickups was much warmer/thicker than other brands.

I really love the fast necks. Much easier to get your hand around (and I even have long fingers) than a chunky neck. The pickups and tone you get from the RG120 is much warmer & thicker than the competition in price range. Squiers, etc. have are too bright and sound to "tinny". The finish is great, I assumed being a cheap guitar that I would soon have many dents, scratches. But I only have one small one and that's from over 7 years of abusive use. It's been my only guitar and i've used it in playing live many times, and recording two demos.

The input nut has come loose many times allowing the input unit to 'spin' around inside, this has led to the wires being ripped off from the unit which I had to solder them back on. Since it is a very basic or low-end guitar the tuning mechanisms arent the greatest so it doesnt hold in tune for that long of a time. I don't use whammy bars, so the fact that the whammy unit sucks doesnt bother me but it may bother others. My biggest problem though is that the neck humbucker pickup gave out. This is a recent problem though. And considering that i've been playing this for 7 years and with heavy use, I actually am not upset by the fact.

The paint and finish is great. Like I said, there is only one scratch and dent on it, it's on the edge of the body. I've dropped this guitar multiple times, i've had my bassist's headstock crash into my guitar more than enough times from being too energetic in close quarters. I've bled all over the pickups and body, sweated all over it, recently got into swinging the guitar around my neck and shoulders, and this guitar hasnt ever died or failed on me.

I know there are better guitars in the Ibanez line-up, and I know there are better guitars outside of the Ibanez company. But bottom line, this is a really great beginner's guitar if you plan on wanting to be a little more serious than just a toy guitar you pull out of the closet to strum every couple months. Though it doesnt have a good locking-tuning mechanism or really great pickups, it still outperforms all other guitars in it's price range. I would love to have a Gibson Les Paul, both for sound and quality name. But being on a tighter budget, Ibanez will always be my pick.

I got it after my Squire Bullet Special wasn't meeting my needs tonewise.

Very nice body shape, and built solidly like a rock. I like the ultra-slim neck, and with 24 frets, it is a good value. The electronics seem to have held strong.

With Seymour Duncans and EMG pickups in this guitar, it sounds great. But, the Powersounds sound flat and are very muddy. They are harsh in the bridge and muddy in the neck.

Although it was bought used, it still has the construction of a tank. The only exception is the input jack, which became loose and ended up tearing the ground wire. Make sure to have a socket wrench on hand to tighten it every once it a while.

Overall, this is a very good guitar for the price. If you swap the pickups out, this guitar will sound very good. I strongly suggest if you have soldering skills you should open it up every once in a while and fix any broken or loosened connections. This guitar makes a good 2nd guitar, so I suggest it to intermediate players.

It is very easy to play on the neck.
It sounds good.
It has good shape.

The frets are the only things that need to be cleaned.

i find this guitar fun to jam on and just fool around. I like how it goes up to 24 frets, and it sounds really nice if you get some effects on it. It sounds good for all types of music although some would argue that is guitar is only for hard and fast metal music.i like the design, but looks isn't everything.

the sound is just about what you pay for, not incredibly great. I wanted a guitar somewhat more like a fender but the squier was what all beginning guitarists had, and i just knew that wasn't me. I didn't have enough cash to get anything nicer. i can't think of too much wrong with this guitar, its pretty basic, and sturdy.

If you want to be different and not get a squier for your first guitar, this would be a good bet. since people don't know what it is, friends think that its more expensive than it looks. again, i like the looks of it: a nice sharp design. don't plug it in, or take the plug out at a bad angle, cause you might break it, like i did within the first 2 months.

this was my first guitar, and i don't regret getting it. i would still choose it over a squier. this is fun to play around with, you'll like the 24 frets, and the shape of it. don't give in to the "this guitar is only for hard metal playing". pretty good deal for the price range.

This review was originally published on http://www.musicgearreview.com
Did you find this review helpful?yesno
»
Read the 14 user reviews on the Ibanez RG120 [1998] »