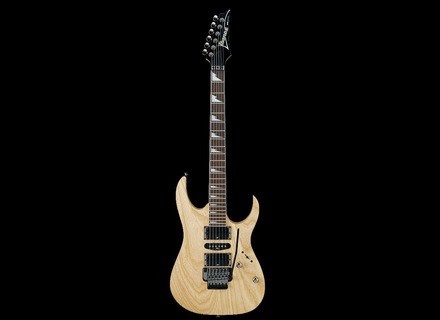 RG470AHZ, STC-Shaped Guitar from Ibanez in the RG Standard series.

Ibanez RG470AHZ
4
The RG470 is the workhorse of the RG series of guitars. It is right in the middle of the line and has been around for years. Now they have a variant of the 470 that comes with an Ash body and a natural finish that shows off the grain of the Ash. Early Rg470 models were made in Japan and later on production was moved to Korea. The majority of examples around today were made in Korea. This examples features an Ash body with a 24 fret neck. The neck is maple with a rosewood fretboard. The fretboard has Ibanez's sharktooth inlays. The body has 3 pickups two of them are humbuckers with the middle pickup being a single-coil. This example featured a Edge II tremolo system. The body is a superstrat style with large cutaways.

The construction on these guitars is decent. I find a guitar like this will rarely feel as solid as a Les Paul or similar guitar. The fret work can be bad on some examples but on this example the fretwork was good. The Edge II tremolo system is a lot better than some of the cheaper tremolos Ibanez use to put on these guitars. Cheap tremolos can ruin a guitar. Without a proper setup those tremolo system will make the guitar go out of tune often. Like most new Ibanez RG's the 470 has the all-access neck joint which makes reaching the highest frets a breeze. This neck joint along with the large cutaways on the body make playing the guitar very easy.

I am not a big fan of basswood guitars. They do not seem to have the thick sound you would get from mahogany or alder. So this Ash guitar is a welcome change. The Ash body is heavier and produces a more dense sound than a basswood body would produce. The bridge position can give you a nice high end crunch on your distortion sounds and the neck position is great for smooth solos and clean playing. The guitar comes with normal low end Ibanez pickups. A pickup swap is recommended on these lower end ibanez guitars. The pickups ibanez puts in its lower end guitars from the factory are pretty dull and weak sounding.

With a proper setup Ibanez guitars are some of the best playing guitars out there. On some models a pickup swap is needed to get the tone to your liking. There are not many nice Ash guitars out there for this price either. Ash is a quality wood for making guitars but it is not used much because it is pretty heavy. Most Ibanez guitars use basswood because it is light. Also, you may want to look for a model with a hardtail bridge or higher quality tremolo unit. For a beginner a bad tremolo unit can lead to major frustration. Low quality units will not stay in tune without a professional setup sometimes. If you are looking for a guitar with a cool natural finish and can play great the RG470AH could be right for you.