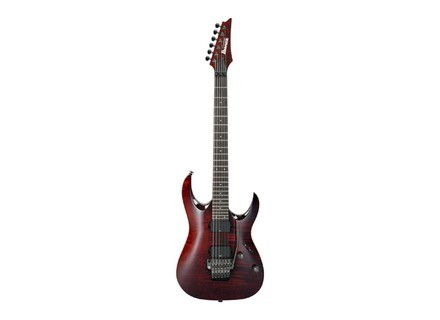 RGA420Z, STC-Shaped Guitar from Ibanez in the RGA Prestige series.

Ibanez RGA420Z
4
Ibanez has neglected the RGA line up for quite a few years, but they're finally back now with more models than ever before. This is great for those of you who like the arched top bodies. The guitar features a mahogany body with a maple top, a maple neck with a rosewood fretboard, 24 extra jumbo frets, dot inlays, an Edge Zero bridge, two humbuckers, one volume, one tone and a three way switch.

The tops on these are great. They have a strong flame, and they're fairly well bookmatched. This is great for looks, but the dark red kinda prevents you from really seeing the detail of the flame itself. The neck joint on this was nice and tight. This utilizes the famous All Access Neck Joint, so you have tons of room when it comes to accessing the higher frets. The fretwork on this is great, as is most Prestige fretwork out there. The ends are fairly round, and the frets are level, so you can really slam the action if you so wish. The trem on this is super stable, but I recommend disabling the whole ZPS thing as it'll make it feel like a more normal trem.

The pickups in this are some active pickups, and they're decent, but they don't sound as good as normal EMGs or the new active Duncans. The guitar itself resonated nicely, and I was able to get a pretty cool tone out of it, especially when I started fiddling with the active tone control that they have in this thing. The clean tones were pretty weak with these things, but that's kinda expected with active pickups. Personally, I'd throw in some more "well known" active pickups, but it might require a bit of fiddling to do so. I'm not sure if they'd just drop it or not.

The guitar is very solid, and if you're a fan of RGAs, you'll love this. Some are disappointed that there aren't any old school hard tail models like they made a few years back, but I don't mind. Then again, I'm a trem user, so I prefer these floyded models. I'm also an extended range player, so I'd personally buy the 7 string model, but these were real solid in the stores.
Did you find this review helpful?yesno
»