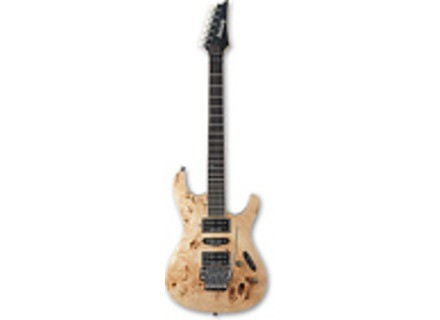 S2170FW, STC-Shaped Guitar from Ibanez in the S Prestige series.

Ibanez S2170FW
5
With the second year of the Korean Prestige facility, Ibanez released a "revamped" model of the S-2075 called the S-2170. This model is really pretty much the same, but the graphic on the poplar changed. This guitar features a mahogany body with a figured laminate poplar top, maple neck, rosewood fretboard, 22 jumbo frets, a unique center inlay, a ZR trem, HSH configuration, one volume, one tone and a five way switch.

Despite this now being the second year of the Korean Prestige facility, I found that there were still a few flaws with fretwork in certain areas on a few models that I tried. I worked in a music store for quite awhile, so I was able to get my hands on a batch of these at a time. Despite that, the guitars were still fairly solid in terms of resonance, fit and finish. The finish on this guitar is actually pretty cool. The biggest complaint I have would be that the poplar top is a laminate top instead of a true poplar top.

Even though this guitar was made outside of the famous Japanese Prestige facility, it still sounds very close to those guitars that used to come out of there. The guitar is very resonant and big sounding despite its tiny body and sleek contours. However, it still suffers from the crappy pickup syndrome that so many other Ibanez guitars have. Once you replace these pickups, the guitars really seem to come alive. I personally like installing DiMarzios in Ibanez guitars for whatever reason. They just seem to mate really well.

The guitar is put together nicely, and it resonates like a good guitar should. There were still a few flaws in the fretwork despite it being the second year of the Korean facility, but they seem to be doing a bit better around this time. The pickups on these still suck, so I highly recommend replacing them. If I had to recommend a guitar, however, I'd still recommend the older models as they just seem to have something about them that really stands out.
Did you find this review helpful?yesno
»

maximalox's review (This content has been automatically translated from French)

Ibanez S2170FW
5
Guitar made in japan
flat handle 22 boxes
Vibrato Floyd IBANEZ under license: Zero System (super has set see below)
IBANEZ DiMarzio Pickups under license: a double-forward, single and double in the middle at the back.
A volume knob and a tone knob.

I do not find it very efficient sleeve (fast), the frets are spaced enough so distrust for those who have little sausage fingers like me, it makes it pretty hard game.
The ergonomics are excellent.
There is a very wide sound panel: we can all play with this guitar (blues, hard, heavy ... jazz)
micro medium has made a beautiful and I use it a lot (to listen ... frankly)

It is perfect for my style of music as it can play anything, except maybe hardcore, though I just hit me last SCORPIONS and I have exactly the same sound.
I started to play with a Fender Hot Rod Deluxe, but it sounded not rock enough so I just changed it to a head Peavey Valve King, it's not too bad considering the price.
The types of sounds are really varied and I say this guitar is super versatile.
The pickups are accurate there is nothing to say and offer a real sound panel.
You want to play everything from jazz to blues to hard rock, this guitar is perfect

I bought there three months.
What I love about this guitar is its first look (although they make a called Viking, a little more expensive, red and even prettier ....)
The fittings are painted a little gray I do not know what it is but it does change monies or gold ....
Are mechanical in oil bath GOTOH with buttons .... Gender white wood (that frankly has the mouth and it's super soft to the touch)
The back of the handle has two furrows accajou I think, from head to bottom.
Very importantly, the floyd is mounted with a tension adjustment screw on the back of the guitar, then finished the endless settings floyd: now it's super simple and I grant with as much time as a normal guitar it really is excellent.
This guitar is very light, but it sounds so accajou and it does very well.
The only negative is the spacing of frets: I had tried with RG and it is true that it is not a supersonic handle (my only regret but it's personal ... so a point less ...)
It comes in a case with instructions for various settings and maintenance. The case provides excellent protection and a vermilion red interior beautifully. It has a small storage box with flap for storing miscellaneous equipment, as well as storage for the strap raignure ... (superb case) ...
Finally, a guitar of this type for 1500 euros, it really is the top (equivalent to a problem without Vigier Excalibur or other style) ... I was not IBANEZ (owner of a US Strat and a GAL), but with this kind of stuff, there's no worries.
I would do this choice without hesitation: it has the mouth and it is noticed, it sounds good and it's super well equipped especially for floyd .... only problem ptits my sausage fingers too too small for this box width so to try before you buy on the net ...
Did you find this review helpful?yesno
»