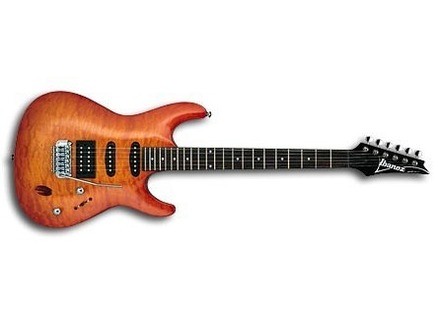 smooth and fast neck, the humbucker sounds very nice with plenty of distortion. Many sounds can be achieved with this guitar.

The middle pick-up sounds too muddy but the neck and bridge pick-ups sound great.

Very good quality for the price looks and sounds great. ideal for gigging

This is one of the best guitars I have owned and for the money it's incredible! I have owned around 10 guitars now and I like this one the best. Right now I also own a Ibanez RG 320FM. This guitar blows my expectations away. A real steal for the money. I urge all serious players to own this beauty. A very versitile axe.

Ibanez SA160QM [2001-2005]
4
Bought it at the Lindberg Music Shop, Munich (Germany) and it costed EUR400,00 (this corresponds to USD450 or so). Taxation is a bit heavier over here, so it's probably cheaper elsewhere. Also, at least in Germany, you can get a good discount (10 or more per cent) at music stores (you get even more discount if you end up buying the guitar case and a tuner, for example). I acquired it because, after a five year pause, I wanted to start playing again - so, to celebrate this I wanted to make myself a nice present.

I originally wanted to buy something else, something more Les Paul-ish. I used to play a Strat, and - after the mentioned pause - I thought this is a good opportunity to try out something else. While shopping, I was trying out different Epiphones, which do really sound nice. Then, just for a comparison I took the next best 'strat-ish' guitar around, which happened to be this one. It was immediate love...

Maybe thess are the reasons:

The fretboard is longer and broader than the typical 'Les Paul' (22 medium frets). For my style of play, my fingers and such, this was the best fit. The 'feel' of the neck is as smooth as it can be (Maple Neck Material, Mahogany w/Quilted Maple top Body, Rosewood Finger Board).

It has a 5-way switch and a tone-knob (chrome-coloured), which allows for a wide and finely tunable range of sounds. (more specs: 2 single coils - mid and neck, and one humbucker at bridge)

It's incredibly light and the design is beatiful.

The price is absolutely fair.

Last but not least, the case (an optional, which I strongly encourage buying) is cast-on the guitar and is also robust and comaprably thin.

The tremolo bar does have its obvious disadvantages: a) If you use it too much, or like an animal, the guitar will detune. b) Bending and simultaneous playing another string is a problem to a certain extent. But then again, to me, this is of minor importance.

The design is very soft, you cannot use it making badass metal poses without looking ridiculous. Not that this is important to me, but if you're playing badass metal, you'd probably buy something that *looks* better.

The neck is *glued* to the body, this gives the entire guitar more resonance, a warmer sound.

Knobs and switches don't make that cracking sound - at least not right away.

Replacing strings is easy. All innards of the guitar are easily accessible and it all looks terribly easy to maintain.

A beatiful and versatile guitar. Buy it. (I don't give it a 5 just in case a miracle happens and I find an even better one.)

Looks georgeous, HSS pickup gives great sound. 5 tone switch is also very usefull. Gives a full bodies clear tone. Just feels right.... something to do with the weighting and the curves just fits into your arms.

Ummmmm? maybe a but dodgy when playing very high up the fret, but then again for its price thats to be expected.

A great all round beginners/intermediate guitar. Solid and reliable you cant go wrong with this guitar.

Ibanez SA160QM [2001-2005]
5
This Ibanez stood out in a music shop in manchester i was actually looking for a mexican strat but when i saw this i just when crazy the amazing quilted amber paint job just made me attracted to it i had never liked Ibanez's before but now im madly in love! And it only costs no more than £299.

The pickups are good quality AS and AH which using the pickup selector you can get a wide variety of tones. The SA range features pro level hardware and finish selection. And unlike any other brand in this price range the SA160 QM recieve the same high level setup as Ibanez's higher priced models. Anything you play rock,pop,heavy metal,classical,punk,ska etc... its just amazing!!!!!!!!!

At the price you can get them fr and the amount of quality you get theres nothing i dont like about it.

This review was originally published on http://www.musicgearreview.com
Did you find this review helpful?yesno
»
Read the 24 user reviews on the Ibanez SA160QM [2001-2005] »