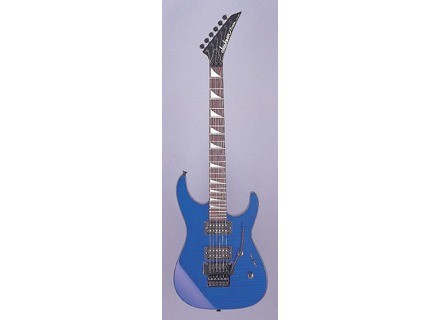 Jackson Stars DK03
4
The DK03 is an HH version of the DK02, and it features passive EMGs as opposed to the normal Duncan Designed pickups that you normally find in the other ones. The guitar has the following specs:

This is the HH version of the DK02, and I find that it's not nearly as much of an issue when it comes to playing. What I mean is, I find myself usually hitting the middle pickup when I'm playing, and the HH models give me that bit of space so I'm not always smacking my hand on the middle pickup. Just a bit of a playing flaw that I have, so I tend to prefer HH guitars. The guitar itself is decent, but there are a few issues with it. The main thing was that the frets weren't perfectly level, but a good luthier could correct that without much of an issue. The other is that the floyd on this is pretty cheap. I find that these cheaper floyds can really hinder tone.

This had passive EMGs in it. They don't sound anything like normal EMGs, so you might be a bit disappointed if you compare it to a real EMG equipped guitar. The H3 is kinda like the bland version of the EMG 81. It's a lazy attempt at trying to get that tone in a pickup. The bridge is bright, but it lacks the clarity that I look for in a pickup. It also seems to be a bit fuzzy for whatever reason. The H3 in the neck was too bright for my liking. I'm generally someone who likes fatter pickups. If it were me, I'd replace these with real EMGs. They seem to work great in Jacksons.

If you swap the pickups in this model, you'll get a very nice playing guitar for the money. Check out eBay and other guitar forums to see if you can snag one of these at a cheap price. You'll be much better off that way than buying a newer Jackson, in my opinion. You also might want to swap out the floyd in this as it's not the best floyd on the market.
Did you find this review helpful?yesno
»