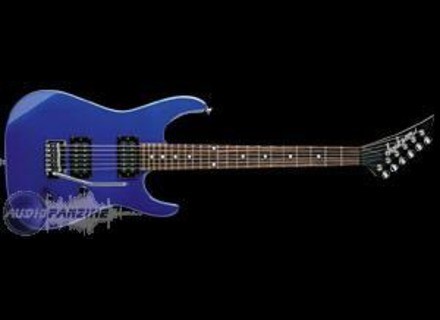 JS1 Dinky, STC-Shaped Guitar from Jackson in the JS series.

Jackson JS1 Dinky
4
I got some money for my birthday last year and I went to the Guitar Center and bought this little guitar for roughly $200. It comes in metallic blue, red and black. (I got blue and it is very easy on the eyes).

I think that it has an overall heavy, very rock n' rollish sound, being Jackson and all of course it was designed specifically for people who play metal or really hard music. The reverse headstock makes it very unique ^.^ Plug it into a Crate amp and it is really awsome and you can belt away a sweet solo on it. I remember playing a Les Paul special and an Ibanez before purchasing this guitar and I thought it had a way better tone than both of them. Great guitar for a begginer.

In the past year I only had one minor problem with this guitar. The input jack came loose and I noticed it was missing a washer that should have been there to ohold it together, but I don't know if this is the same for every guitar, it was probably just mine. (Quoting Cobain, won't you believe it, it's just my luck). But that was really all. I wouldn't recomend this guitar for someone who's been playing for a while or someone who plays mellow music like, for example, Queen or even Cheap Trick type stuff. It just only sounds good for heavy stuff, I'd say from grunge to metal. Sometimes I don't think some grunge stuff works on it either. You have to be selective with your music on this guitar which is a tad irritating when you don't have a backup. I also find it amplifier specific. I've plugged it into a Fender amp before and it was so flat that I had to actually tune it up to fit the amp's sound and then back down again when I played on my Crate.

I think the construction of it is very well done. The framework on it is very nice.
It has a little weight to it which, depending on the person, can either be a good or bad thing. It's neck is quite thin so when you're playing for a while it dosen't get painful quickly. It also makes it really easy to manipulate and wail out whatever your heart desires. It's pickups are very nice when raised to the correct level.

Overall, I find this guitar very good when playing around with stuff, but I don't think I'd take it to a gig with me unless I was feeling very open to experiment with music. Nice guitar for a begginer, but if you've played for longer than like a year or two, I might suggest getting another model of the Jackson JS series. It definatly brings out the best in Black Sabbath when playing a cover of them I'll give it that heh heh o.O

Jackson JS1 Dinky
4
I bought this guitar at a local pawnshop for $160 (after trading in my old First Act guitar). It has a metallic red finish and looks awesome!

First off, as I noted, it looks really good. The fretboard is nice and smooth, and the guitar generally looks built to last. For metal guitarists, it has a very good metal tone (it sounds twice as mean as my First Act did with regular distortion!).

There are only a couple of things I don't like about this guitar. My first problem is a very minor one that really doesn't effect the guitar itself too much. I just wish that the guitar had the standard, cool-looking Jackson inlays that most Jacksons have (unfortunately, it seems this guitar was made as a stripped-down Jackson). The other problem I have is that the pickups can sound muddy when you try to get a clean sound out of them, especially the top pickup. This may be due to my amp (which is a crappy First Act practice amp; hopefully I'll get a Behringer or a Line 6 amp so I can see what this Jackson's really made of), and it seems that adjusting the tone button helps somewhat.

The guitar is well-constructed and great-looking as well. Only problem is with the pickups, as I said above. Hopefully different pickups or a different amp can help to fix that.

Overall, this is a pretty good Jackson for a beginner guitarist who likes metal, and for the price you can't go wrong. This guitar has assured me of the quality of Jacksons and makes me hope that I will continue to play them in the future.

Jackson JS1 Dinky
5
I got it at a First National Pawn in Billings Montana. It's metallic-red, pretty color, and has 2 Jackson humbuckers. I paid about $250 for it, which is not a bad deal.

It had absolutly nothing wrong with it. I really enjoy it, and I don't plan on getting rid of it. The color is awesome.

Actually, the only thing that kind of bugs me is I get a lot of feedback when I use my distortion pedal, but it could be just the pickups. They aren't high quality, but they are perfect for a "Single-coil beginner" who wants to step up to the "humbucker crowd."

It is a perfect guitar for beginners. Plays fast and smooth and has an awesome color to it. I highly recommend this for someone who is looking for a first "real" guitar.

Jackson JS1 Dinky
3
The Jackson JS1 is one of the original guitars from years and years ago. However, today's axe is far from hanging in the realms of the normal Jackson series. The guitar has the following specs:

The guitar had quite a few issues from what I found. The frets were a bit sharp on the ends. Whenever you moved your hand up and down the neck, you could feel them kinda dig into your hand. The frets were also uneven, and I couldn't achieve the action I was looking for. The neck joint on this had a bit of a gap in it, and that can adversely affect tone. Access to the higher frets wasn't too bad, but I generally don't have too much of an issue with that as long as it's not a Les Paul.

The guitar sounded pretty thin. First of all, it didn't resonate that nicely acoustically. That seemed to have a negative effect on everything else. The bridge pickup was hot, but it was pretty thin sounding. When I rolled down the tone knob, everything just became real undefined. The neck pickup was very muddy and lacked all definition when it came to fast lead passages. I couldn't comment on the middle position because I never use two humbuckers at the same time. The clean tones were pretty bland, and midgain tones were nothing noteworthy.

These are pretty cheap guitars, and there's a reason for that. I really don't recommend getting these. Instead, if you're on a budget and want a Jackson, look at the Japanese Jacksons. They're put together better, seem to have more resonant woods and just feel better. You can get them pretty cheap on eBay.
Did you find this review helpful?yesno
»
Read the 7 user reviews on the Jackson JS1 Dinky »