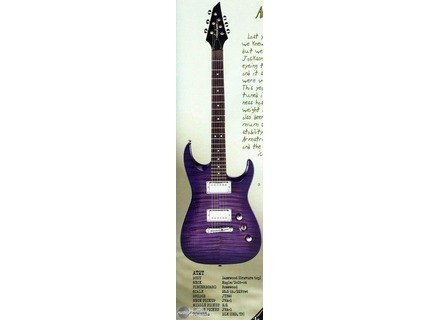 AT2T Archtop, STC-Shaped Guitar from Jackson in the Professional series.

Jackson AT2T Archtop
4
You don't see these archtops too often, and they were never a big seller for whatever reason. I think the main issue people had with them was the headstock more than anything else. The guitar has the following specs:

The top on this looked very nice, but keep in mind that it was a veneer. There were a few dings here and there thanks to this being a used guitar. It wasn't too terribly resonant, which I believe hindered tone. However, there was no neck pocket gap that you can sometimes see on these guitars. The bridge is alright, but I'm not a huge fan of hard tail bridges. The 22 frets were one of the reasons why I personally never really played these models. That, and they can be pretty hard to find.

The basswood in this lent itself to giving this Jackson a much darker and more strong midrange type of tone. I'm not normally a fan of basswood Jacksons, and a lot of that has to do with the history of the wood they used. If it were an Ibanez, I'd be all for it, but I'm just not huge on Jacksons with basswood for whatever reason. The pickups in this were pretty dull sounding, and they lacked dynamics. I think they were supposed to be Duncan clones, but they don't sound like a normal Duncan pickup does. Clean tones were average, high gain tones were muddy and lead tones weren't what I was looking for.

I think the guitar looks great, but the fact that it's made out of basswood instead of mahogany is a bit of a deal breaker for me. I don't hate basswood, but I just want Jackson to use either alder or mahogany instead of basswood, poplar or those other woods that were used quite a bit during this era.
Did you find this review helpful?yesno
»