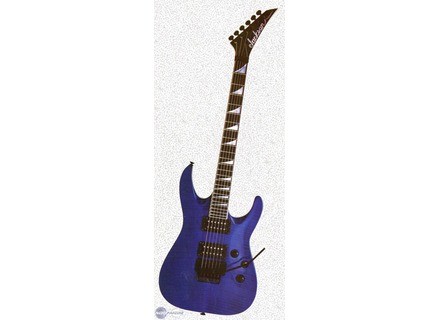 Jackson Soloist Archtop Trem
5
The Soloist Archtop was never quite as popular as the normal model, but I always found them to be pretty cool myself. The guitar has the following specs:

This model is yet another reason why I believe some of these Pro guitars are just as good as the USA rivals. The guitar had some good weight to it, and I found it to be a touch lighter than the Ltd. 91 version thanks to the fact that there's no maple top. The maple can really add some weight which isn't necessarily a good thing. The fretwork on this was awesome, and I was able to get some sick action without much of an issue at all. The bridge on this is pretty good for a licensed floyd, although it was starting to show its wear after all these years. The neck itself felt very nice, and the arch top body was a nice touch on this model.

This guitar had the Seymour Duncan JB in the bridge and the Seymour Duncan Jazz in the neck. These aren't the stock pickups, so keep that in mind. The JB in the bridge is great for that 80s metal tone. However, it can really do anything from fusion to death metal thanks to its versatility. The mahogany wings helped calm down some of the treble that's normally associated with the JB. I tend to like darker tones these days, so that was a benefit. The Jazz in the neck was a fairly clean sounding pickup, and it worked great on clean tones. Lead tones were a bit "direct," but it still sounded great for some of those shred lines that I like to bust out.

This is another one of the guitars that rival the Jackson USA series, and it's no surprise that these were so coveted back in the day. If you can find one of these at a good price, I recommend buying it immediately. Unfortunately, most people today seem to know that these are high quality guitars and price them accordingly.
Did you find this review helpful?yesno
»

Jackson Soloist Archtop Trem
5
Jackson SOLOIST SL2H ARCHTOP TREM first generation Japan has made NAGANO 1992; When Jackson wanted to market its model worldwide by opening a second plant in Japan in 1990. Excellent Japanese luthiers have been trained by the master luthiers Americans. This was followed by a golden period called "the golden age jackson" where the models produced under the name professionnal were in the opinion of connoisseurs of quality equal to U.S. models between 90 and 95. At this time the brand took the time to dry out the wood! blow the beats were dry and hold water .. But today new guitars .... short .... The only real difference between this and the MIJ USest hardware the U.S. is equipped with an original floyd . Mine is 1992, verifiable and identifiable by the "digit" 5 digits visible on the last fret. Originally mounted duncan sh4/sh2 with a floyd Shaller, which has nothing to envy to a floyd rose frt 2000 marks pearl and the jackson logo, ebony fingerboard, white binding, a rounded table 18 MM maple carved knobs dug a push pull on the volume to get the double simple. The top level!

Channel jackson slightly rounder handle a dinky, but remaining very Jacksonian ^ ^ The handle is lespaulien tune of 24'3 / 4 25'5 not on this model it was intended to better meet the standard heavy. No surprise it's a jackson high level for fans of the brand, is the top, nothing is equivalent in terms of comfort. The frets are slightly rounder probably type medium jumbo. The ebony fingerboard makes blow for blow, hard as marble, legato is as heated a lump of butter knife. Perfectly balanced, it is quite heavy due to the addition of table 18 MM maple.

The original sound is huge! outdoor living ... hot ... but I changed duncan against the juggernaut bareknucle ... my god! Slap.
Passing the juggernaut bareknucle are really a success, thank you Misha ..
In C # it sends the paté, this guitar is detunable and love it. With splittable volume is just unbelievable jugernaut splitted that it makes! this is simple I have a metal scraper and a gigantic skyscraper huge funk. I play Djent goes without saying that this guitar is an absolute for this style.

I had charvel, strat, jackson etc etc that there is iremplacable as part of the story

is the m ^ me the red, but mine is blue ^ ^
http://audiozone.dk/index-filer/jackson-professional-history.htm

See information about audiozone ..
Rare, this guitar goes to the heart .. and purpose, to dream .... its owner and his buddies ... great guitar!