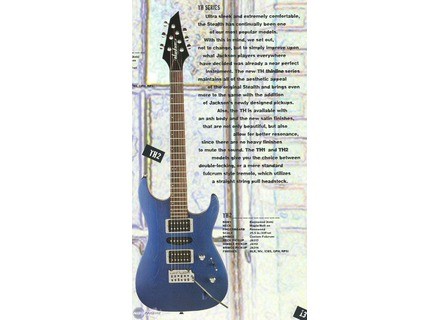 TH2 Stealth, STC-Shaped Guitar from Jackson in the Professional series.

All user reviews for the Jackson TH2 Stealth

Jackson TH2 Stealth
4
The TH2 Stealth brings about two different changes when compared to the TH1 -- for one, it has an ash body (although basswood is also available). The other is that it has an HSH configuration. Finally, it has a different headstock. The guitar has the following specs:

The biggest thing that disappointed me with this guitar is that it had the vintage trem. I don't mind vintage trems on strats, but if I'm playing a Jackson, I want a real Floyd Rose. It's just kind of a pet peeve of mine. The guitar itself was put together fairly nicely without any major issues. There was a slight neck joint gap, but it wasn't anything major. The frets could use a good one around, but all in all, it was put together quite nicely.

The pickups in this weren't that great, and it's no real surprise considering that they were stock pickups. The guitar itself was pretty resonant sounding, and it had some good weight. The bridge pickup was a bit muffled sounding, even with the tone pot maxed out. I was hoping for some nice clarity, but it's about what to expect with these stock pickups in these guitars. The middle single works good in the split positions, but it's pretty useless on its own. The neck humbucker was a bit too muddy for me, and I'm a fan of fat neck tones.

Julien Bassiste's review (This content has been automatically translated from French)

Flat handle, trs polivalente guitar, even with the original pickups (which only has an active bridge would be better!) Lgre, you can play with for a long time without the shoulder numb. The bridge, we forget the vibrato, screwed it all, it is transformed into fixed and go! it's not a floyd rose!

Since 1996
The +: handle
the -: the bridge
good value for quality awards: in 1996 725 $ / 5100F
Did you find this review helpful?yesno
Cookies help us improve performance, enhance user experience and deliver our services. By using our services, you agree to our use of cookies. Find out more.