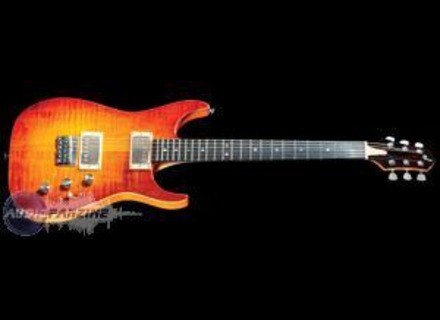 Jackson Bent Top
4
This guitar is even more rare than the normal Sweetone series that you see on eBay and the such. The thing that makes this different from the other model is that this one has a figured maple top on it instead of having the regular old solid finished look. The guitar features a spruce body with a maple top, a mahogany neck with an ebony fretboard, 22 frets with dot inlays, a hard tail bridge, two humbuckers, two volumes, one tone and a three way switch.

The flame top on this model was very nice. The sunburst finish on it helped really bring out the overall character of the flame, and the bookmatching was done nicely as well. The bridge on this isn't my favorite. I'm not really a hard tail fan to begin with, and this isn't one of the better hard tails out there, in my opinion. That said, it's also not one of the worst, either. The angle is nice enough to where it feels natural, like a Fender. I grew up on Fenders, so those extreme angles like Gibsons have can be a bit off putting to me at times. The fretwork was decent, but there were a few minor issues that I noticed with it. The nut was cut properly, so no issues there.

The guitar had a JB in the neck and the bridge, and I'm not sure how good of a fit this was for this guitar. The JB in the bridge wasn't too bad, but it had some annoying midrange to it that I think was due to the wood combination in this guitar. The pickup itself is generally pretty good and works in most guitars. It can also do most styles out there from blues to brutal death metal, and while it wasn't exactly bad sounding, I just felt that there could have been a better pickup for the bridge in this. The JB in the neck was never one of my favorite neck pickups, and it can be a bit too hot and focused at times. That said, it does deliver a pretty cool, searing lead tone that you don't always hear from guitarists these days. The cleans weren't my favorite, though...

The guitar looks great, and these are pretty hard to find these days. You'll have to be surfing eBay for awhile to find one in good condition and at a good price. If you do happen to find one, I recommend you buy it as they're definitely worth it. The tone is unique, and the overall quality is pretty good, despite the flaws that I mentioned before hand in this review.
Did you find this review helpful?yesno
»