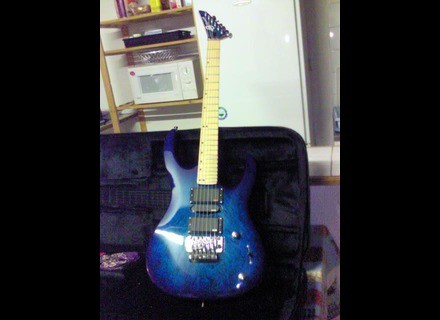 Rockline Custom, STC-Shaped Guitar from Lâg in the Rockline series.

The neck is super nice and immediately calls the rhythmic Rock.
This guitar is a little heavy, but the sound is terrible.

Various configurations possible pickups are incredible.
Seymour Duncan SH4 JB in the bridge.
Seymour Duncan SSL-1 in the middle.
Di Marzio Paf Pro neck.
The two doubles are splitables and selection of microphones is thanks to the mini switch.
I mainly use the double saturation on a Mesa Boogie 5-50 combined with a multi effect Korg AX 3000 G
I have a hell of a

I used from 1984 to 1996, but one day she fell and broke his neck origin. Despite two attempts to repair by DNG, it has not held ...
So I made a handle to Jackson, but the soul of the guitar was gone.
Then recently, I met the maker NaN who had the idea of "magic" to put a handle telecaster ... And since we go again like in 40!
I own two Ibanez JS 1000 BTB a JS and CA 1200. Leduc D3 and also a CL.
What I love about this guitar is THE SOUND, and handle.
It's just a bit heavy.
It is priceless.
Did you find this review helpful?yesno
»