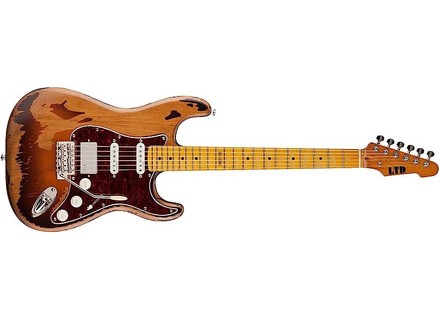 LTD GL-256 George Lynch Signature
4
Well, yesterday I took 30 minutes to make a great (the only currently) notice and after a pb wifi reception ... all ended in nothing ... so I'll be more concise.

it is the little sister of the Vietnamese ESP GL 56. GL for George Lynch, I know no name (to have been since the late 90's in the ESP catalogs that I was in the music and magicians have a dedicated page). I have the older model (changed earlier this year when I was purchasing mine), I have a white pickguard instead of red marbled vintage today. I do not know if there are many differences, today's finish looks more beautiful. But the ESP site announces eg mechanical LTD, whereas mine are stamped ESP logo which is also, to my surprise, taken behind the head (as ESP my ranch certainly did not, but everything is certainly to have it on the front of the head!) and the plate screws of the handle (ah yes bolt-on!)

features side so it's a layer-like, what was lacking in my harem, with handle and maple fingerboard (I missed that too), it is reliquée, but this place is rude, in any case, it is clear that 'it is a real ps wear. Some spoke of décalco, I rather think it is a stencil, see the thick layer of paint where the sunburst is the darkest. The effect is far succeeded or twilight ...

HSS config with a double cover with aluminum pads of the apparent low, too relic rather successful. 5-way switch of course, 1 vol, 2 tone, 22 frets and vintage trem (not a big fan), in addition, I tear some of the vices of the bridges with my right hand, and I'm also a little embarrassed the knob flight, right where I have my little finger (which idea to have five, eh?), but hey I've also noticed that on the real stratum, those of the brand F-like to 7, so that detail is not one!

it is light, fairly well balanced, and easy to take in hand, the handle is traditional, and as I play any type of handle, or at least, as I do not bring it to attention, is ok!

in production mode, everything goes, she does what is expected of a strat-like, fun to play, light to wear, what we forget! access to normal highs for the category, one quickly gets his sound. The frets seem a thick hair, but it must come from the inspiration, and I think the guitar responds better with lighter rods (where I have a 10-46 in Eb, ca might have been better 9 -42 ...)

then sounds, and many great surprise. Already, it is a basic strat and it sounds strat on single coil (phew, that's a good sign). The interposition are great, they really bring what I had not, and magnify any effects (eg on a chorus as my CE-3, it is simply beautiful!).

Twice about sending him well! it goes pretty fast in the turns and gives a very gibson color, which really surprised me! but that SG LP, and the amp suitable (as Orange) one is in AC / DC on the first line with a gain in half ... Royal

I do not know the routing mics, but you can spend a crystalline fat through interposition, it's really nice and versatile. In addition, on a hi gain amp you can type in the metal (rather old school) and it sends the same wood! Moreover, I approached her curiously Death Magnetic by Metallica on a 5150, which will give a report and dug quite cold, so rather modern for this type of high (really curious!)

Otherwise, vacuum or clean, we know where we are, there's good bass very present, very round (mind what fender), and four positions are just too simple kiffantes!

a good point for the Vietnamese!

I've had five months, and I love to play with, I often take on the coast for the weekend, no bag or box, anyway this is a guitar that you buy already aged, so no remorse, and I love when it lives, when age marks instrument!

once past the aesthetics a little "Asian subcontractor" I find fault in the paint, the rest is nickel and I do not like playing on a bad instrument, the new version seems better finished this respect, to see then! but in any case, very good value for money! especially as OCCAZ, with some negotiations, I have not felt!

I have not purchased for George Lynch, I know little, but for the customizer ... I'll see what I do, but for now I keep it in the original version!

in any case it seems to be quite rare, little vid on youtube, no opinion here, so I hope this helps the community!