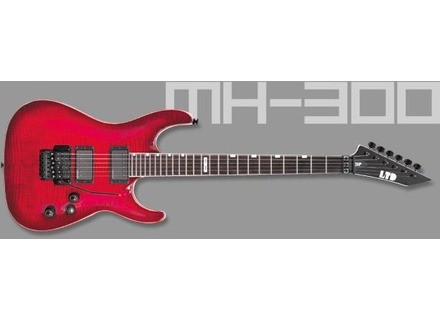 MH-300, STC-Shaped Guitar from LTD in the Standard MH series.

Overall this guitar is pretty awsome. Nice neck through, I like the licensed Floyd Rose, EMG HZ's aren't bad, the finish is beautiful for a mid range priced guitar, and it plays like a dream (fast and easy).

The only problems I've experienced with this guitar in my year plus playing (including playing death metal and at dirty clubs) is the tremlo bar comes loose and you have to tighten it every once in a while, and the screws on my neck EMG HZ pickup have rusted a little (I sweat like crazy when i play- from the headbanging and jumping around), but it still works and sounds fine. I guess I had to set up the guitar a little when I first got it also.

This guitar is built to withstand anyting. I can't tell you how many times I've knocked it into something, some one, etc., and it is still working fine and really not that beaten up (only a few knicks here and there). Definately a quality built guitar.

I would recommend this guitar to anyone. It's a work horse, sounds great, and you don't have to baby it like a $1000+ dollar guitar and worry about it all the time. I guess ESP just makes the MH-301 now, but that appears to be just as good a guitar (only real difference is the flamed maple top on the MH-300 vs. the quilted top on the MH-301's.).

LTD MH-300
5
At the local guitar shop around me, which is named Midnight Music, near Pittsburgh, I paid around 600 dollars for a very nice, very affordable guitar.

I really like the neck-thru design. The tremolo is very nice too. Locking tuners, Emg humbuckers, and a beautiful finish. I have no complaints about this guitar, other than...

When i got the guitar it was already not setup correctly so anything past the 12th fret is out of tune by a small amount. Not that big of a deal but its also my only complaint.

The guitar is designed perfectly.

If you're looking for a moderately priced electric guitar with some great normally higher priced features buy this.

sanvidala's review (This content has been automatically translated from French)

LTD MH-300
4
So I think it's a Korean, it is equipped with 24 frets and has two EMG HZ.
The bridge is floyd type, but in liscence.Trois settings are possible: double major, middle and treble double double.Un handle fast enough the team.

It has a hand grip from the start, it's slippery, would solve, and ca rereglisse.L access to your perfect Treble (Start type) and it is sitting, standing, or lying to jouée.Gros bullet (personal ) it is really too light to play long it lacks something ... queleque surment bois.On strength and his drinking gets in the way of scratches anyway with EMG HZ do not expect merveilles.Ceci to say they still offer a lot of sonic possibilities (Do not ask for the moon)

This is a guitar with which one can play a little bit of everything but demand for micro switch if you want to get a significant grain and sustain convenable.Le is also not the pinnacle of what can be done Despite his neck through a potato can be recommandé.Avec good microphones is easily obtained by the big sound distortion or saturation against the or she is a little feeble, it is clear the small passages clair.Les but if it's going to attack anything that is not great, must say that this guitar is not destined for the groove ...

I kept scratching the 7 mois.Esthétiquement MH301.Ce it looks like my favorite was her look, color and race traversant.L 'Behind the Scenes: a floyd so-so (level of tension adjustment springs) and also in terms of its fittings, which tended to go easy during the tightening of cordes.Dotée a light on questionable value seemed lower than the moyenne.Je have purchased about the epoch 800E (4 or 5 years of that). At that price you can afford a godin (new). It is clear that I did not refer this choice.