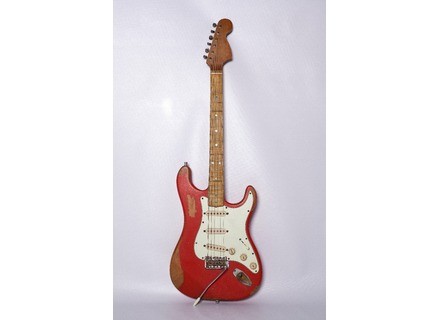 mimidelaye's review (This content has been automatically translated from French)" the best strat ??"

M&C ST-69'
5
I really wanted a relic guitar well made but I do not have the money to pay me a Fender custom shop ... I already owned a Fender reissue 62 (the olympic white) but I did not have the relic side and I was not convinced against a friend who has a custom shop kenny wayne.
So I folded over 2349 euros to buy this guitar, really beautiful, we really believe that the guitar at 50 years and lived well. As you can see, it is very well done relicage.
Importantly, depending on the brand, the wood used is naturally aged for 30 years, AC has a significant importance on the sound from them.
Another interesting point but that is not supposed to copy the guitar, a Channel crossing instead of the usual Bolt, the sustain is huge, and even without an amp the guitar sounds very well.
The pickups are seymour duncan antiquity reels in hand, we are in the very high end, much better than the 62 reissue.
The rest of the equipment is in the same line.

The handle is super nice quite similar to the 62 reissue, except down or there is a little rounder and the heel or it is cut to the shape of the hand.
It is a little heavier than a standard strat, I think this is due to two thirds alder body maple one third.

Then it's the bomb, as said before, I test a lot of strat to get closer to the original (also tested) and I can say I'm coming!? !!
Even my friend with his custom tastes bitter when he thinks at 1200euros more he paid for his.
I use a jcm 800 and a copy of plexi and whether one or the other, the sound is beautiful. I have not yet had the opportunity to play with a Fender amp, but I do not think disappointed. Listen "scratches" John frusciante, I have the same sound.

I use it for one month and I'm not ready to let go.
And with the economy over the price of a custom shop, I might be able to get me a fender amp to combine with Eric Johnson.
I do not see any negative point, because this guitar I find my grail.
The only thing I regret is having spent so much money for so-called successful guitars that have that name.
I'm going to try to get money by selling the Fender reissue 62.
If you too are a fan of this myth, you know what you have to do.