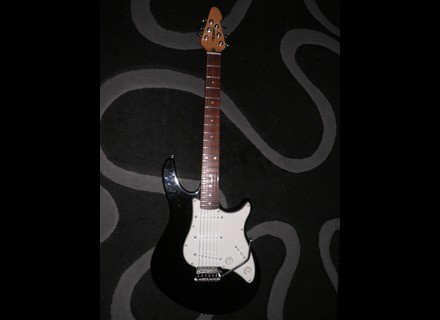 Raptor Special, STC-Shaped Guitar from Peavey in the Raptor series.

Peavey Raptor Special
5
I bought the Peavey when I started playing a couple of years ago. I was looking for a good beginers guitar which was reasonably priced and played well. I ought the Peavey for just £100!!

The guitar has a great playability. It is far better priced and sounding than he yamaha pacifica 112.

Great pice of kit. It dosen't have bits of it starting to fall off after a while. Good quality pick-ups.Nicley sized neck.
Nice shape.

It has to be the perfect begginers guitar!!
Every time I come to thinking about selling it,I just can't!
Well worth the money

Peavey Raptor Special
3
Bought it in Village Music, Scotland with a rage amp for £139.

Well... first of all, I shall mention that I am an experienced guitar player and that this was my first ever guitar. It did the job, but it broke a lot, even in the first few months of playing. I was, however a pretty reckless player. Low action and 3 single coil pickups. The Tone knob broke within a week and still, to this day, is not fixed. I later bought an epiphone sg. I was very satisfied with this guitar, however, it is strictly for beginners.

Well constructed, until it broke. Nope, not very much thought put into this unit. Come on peavey!

Good guitar for beginners, that's all.

Peavey Raptor Special
5
im only 11,and i wanted to get a guitar,of all the shops i looked in,a peavey stood out,the body of it is brilliant,the neck is slim but the strings are spaced out well.i only paid a mere £100 for it!

the quality is absalutly brilliant

ok, cheap, but good finish, very noisy when connected to an amp

good starter guitar, that's it, upgrade as soon as you have problems with it, costa lot to fix