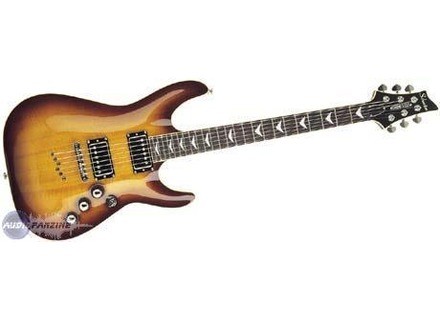 C-1 Plus, STC-Shaped Guitar from Schecter in the C series.

Schecter C-1 Plus
5
I got this guitar in Guitar Center, in New York. I heard great things about Schecter in general. I played it and it was amazing. I bought it for $550.

Everything has made with such good quality. The neck is very fast and smooth. It has a great finish, and all the hardware is made with uncanny quality.

There is no pickguard. so I have to be more careful with a pick.

Schecter C-1 Plus
5
i got this sucker on ebay for $349.99 got thr black cherry finish ,thing kicks sounds so great

i love the color!! the pickups just kick..i like pretty much every thing about the guitar...looks and sounds beautiful...the inlays are a design of i dunno, but they look sick as hell

the only thing i dont lie is the fret board and the neck are not jumbo frets liek described its a little smaler, but thats ok it dosnt effect the playng its just a personal preference...

this is a solid guitar..very well built no complains..

well my final thought is that this guitar was def worth $349.99....prolly 2 to 3 times this..this thing screams and is a sick guitar

Schecter C-1 Plus
3
I purchased it through the American Musical Supply (AMS) catalog. I was looking for a step up from my $200 starter electric guitar (a strat-cloned "Cruise," if that means anything to anyone...not a bad little junker, although it was starting to go electrically senile). I paid $550 for it, with a nice hard-case and a cord.

It really is beautiful. The inlays, binding, finish and chrome hardware give it a pretty sleek look. Sounds good too; the bridge humbucker does especially well on distorted leads, and with the selector on the neck or combo, you get good clean rhythms. Also, there's 24 frets, so you have two octaves worth of room per string!

The nut eventually fell off! It suffered no abuse to my knowledge either. Maybe it's just a freak incident, or something, but I had to superglue the damn thing back on. Also, it doesn't have a whammy bar, which feels very limiting if you've "grown up" with a WB. And one more point: I am still not *totally* satisfied with the action of the instrument either. Even after many adjustments, it's not as liquid-smooth as some nice Strats I've played; at least, I can't get it that way without causing some serious buzzing in the upper 12 frets (those closer to the body).

I think the materials are good quality. Maple top, mahogany back, rosewood fingerboard, chrome (not a spot of rust after 3 years!). The two humbuckers are Duncan Designed. I should mention the tuners (Grover) are good, because they don't lock or loosen up like the cheap tuners on my old electric. I've never had any problems with the electronics at all, so they seem well done.

Not bad, but not fantastic either. Aesthetically it's awesome. Sonically it's good. Construction-wise it's mostly good, but has some issues. And as playability goes, it may be somewhat limiting to an advanced musician...but otherwise is okay. So, if you have some spare change, but can't buy the Cadillacs till you're a dirty, rich old fart, I'd say the Schecter C-1 Plus is a reasonable consideration.

Schecter C-1 Plus
5
I got this guitar at East Coast music mall in Danbury CT. The guy gave me a great discount, making the guitar $485, instead of $530, the musiciansfriend.com price.

The guitar is beutiful. Its 2 duncan designed humbuckers sound great, clean or distorted. The thin neck makes it easy to slide up and down.

I could not find any problems.

Mine is vintage sunburst. The finish is great. It is a one piece guitar (no bolt-on neck). I am pretty sure it is made of mahogony. The neck slides very easily and is very slim.

This is a great guitar, and if you are looking in the 500 to 600 dollar range, look at this one. It is a lot for your money.

This review was originally published on http://www.musicgearreview.com
Did you find this review helpful?yesno
»
Read the 7 user reviews on the Schecter C-1 Plus »