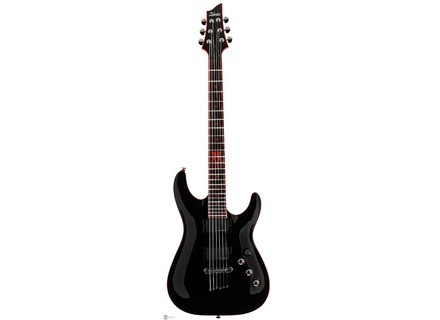 C-1 SheDevil, STC-Shaped Guitar from Schecter in the C series.

dave-94's review (This content has been automatically translated from French)

The sustain is very good to excellent, clean sounds leave something to be desired, but by adjusting the microphone volume is quite acceptable.

Very typical metal guitar, blues, however, do not fear him, and away without fail.
By stepping on the neck pickup, it really resembles a bcp emg 60, the bridge pickup being a little more garish, like the EMG 81, but it is warmer, so playing on the volume, ca n ' is not a concern.

It's been six months that I have brought the United States, and it kills frankly, I did all swallow problem, the neo, to death, and blues.

I remake this choice without any hesitation

This guitar will never be sold in France in 10 years as usual, it is sold € 679 in the United States, and is an excellent value for money, like all schecter elsewhere!
Did you find this review helpful?yesno
»

Schecter C-1 SheDevil
5
South Korean Model
Guitar type solid-body.
Mahogany body
Set neck, 3-piece mahogany
24 jumbo frets put on an ebony fingerboard
Grover
TonePros TOM bridge (Tune O Matic)
Through-string.
Active pickups Duncan Designed HB-105 (based on the Seymour Duncan Blackout)
A micro volume
1 tone
The knobs are a dark metal color with a beautiful imitation iridescent surface oil. Home of the knobs is an imitation of jewels that will not please everyone, but at least the advantage of having a vision of rapid adjustment knobs.
3-position selector
Binding Red
Red marks and twin devils of the handle in position 11/12/13

No complaints, it&#39;s all good in terms of features but perfection does not exist, so I put 9.

The varnish on the back of the neck is very smooth, and glides easily over the ebony fingerboard is really nice, it seems to move on satin.

Access to acute and greatly facilitated by a very well designed notch on the back of the neck at the heel.

The key has a small radius, like the neck Gibson I mentioned above, which is quite suitable for solo Thurs.

The nut, although plastic rounded edges, which is a very good initiative from Schecter. The sudden Demanche up the sleeves will not result in painful hooks on the nut.

The back of the body includes the recess classic strats.

The guitar as a whole is well balanced. Weight, at arm&#39;s length seems heavier than a Gibson firebird.

Disconnected, we feel its a very slamming, more pronounced in acute than Gibson firebird, more "metallic". The body resonates quite well.

After several weeks, I found a flaw common to many of C1, is where is the pickup selector. Because when you put it in the neck position, in a move a little further, you pass inappropriately towards the middle or bridge pickup position.

Connecting the beast so to see what it really is in the stomach.

So in terms of musical style, I&#39;m very eclectic. Although I play in a group of cold-wave, I like all styles, rock, blues, funk, psychobilly, metal, ambient, punk ...
It is therefore difficult to say whether it suits my style of music especially as it can cover the different styles. In fact, I needed a guitar that stands out in my Gibson, more incisive, more sharp, to have 24 cases, because even if it is used little, it&#39;s always nice to have them when needed.

The sustain is very good, helped particularly by the strings traversing.

Whatever the microphone used, the slamming we felt disconnected is confirmed. The ebony fingerboard contributes, of course.
The mediums are present, which is characteristic of mahogany guitars.
There are fewer mid-bass and more treble than a firebird studio, but the tone knob is so effective that one can easily correct this.

In his clear;
on the bridge pickup, it has a very percussive, dry, very characteristic sound psychobilly (The Meteors, The ghastly ones).
It can even be costly to one side Twang telecaster.

And lowering the tone knob, you can have some nice arpeggios for the post-rock.

The solos in clean sounds out well with this microphone.
This micro reminds me something that would be between the stratosphere and the jaguar.

On the neck pickup is closer to most of the Gibson, but less fat. The tone knob is very effective here and lets go of his funk in a modern jazz sound.
Arpeggios spend much more on micro than on the bridge pickup.
The attack is still very percussive.

The blues in its clear going very well on the scratch but I prefer the round side and softer sound to the Gibson style.

The dynamics of the microphones is very ample. I was afraid of being disappointed by the Duncan Designed and instead, I must say they are very good.

In bridge pickup is clear and sharp as desired, with very good harmonics, and a more tailored for the solos as the rhythm.
There are many high-mids and treble but they are not in excess. The bass are there to provide support.
The SheDevil no shortage of character. It does not sound like an Ibanez, ESP or a Jackson, she really sound all its own. We can not tell whether a copy of a "great brand" at least.

The neck pickup when to him is a little more mellow for my taste and rather oriented solos too, but allowing him to be able to venture into the world of jazz-rock to John Scofield, see Santana.

The rhythms are not at all bad to play on this devil, but the choice, I prefer the Gibson Firebird to fulfill this role.

In any case, whatever the micro was a very good presence, and the sound comes off easily in a mix.

The distorted sounds are ideal for metal, and shredders will be more than happy.

In light crunch and overdrive, it&#39;s a good surprise, because whether or arpeggiated chords, it was impressive results for all that is rock, stoner, post-rock, cold-wave (in the joy division).
However, the sound is much cleaner than a Gibson, but frankly it&#39;s not bad for a guitar made for slicing.
The blues becomes downright enjoyable in these sounds is elsewhere. It manages to make the guitar scream, surprisingly.

In general, I&#39;d say it&#39;s a guitar suited to modern styles, but who knows, however, adapt to other genres like the oldest rockab / psycho.

I use it intensively for 3 weeks (some say it&#39;s little, but on the experience I&#39;ve had guitars and I have passed through the hands, and I would change the view if necessary is).

The specifics I like most:
- Violin making and finishing exceptional for such a price
- Copy the comfort of the handle
- Sounds (especially saturated and overdrive)

The specifics I like least:
I honestly do not see. Not sound very "old school"? But this is not his calling anyway.

So I would say it&#39;s a guitar with character, very nice to play with modern sounds and percussive (funk, metal), though with enough versatility to occasionally venture into other styles as needed.
In addition, this guitar has everything a "big". For that price, it must be said that the marks of great renown have interest in question, because Schecter has clearly decided to upgrade the so-called mid-range guitars.

In my case, it is a great complement to my firebird, and what is surprising is that I come to abandon my Gibson to play on my Schecter, except for where the sounds Schecter n &#39; is not sufficiently at ease.
It&#39;s a choice I would do again in a split second.

It has definitely replaced my firebird. By setting the tone knob it right, I got to get the same sound as the Gibson by a whisker.

I became a fan of the brand, and I plan my next purchase at guitaristic Schecter. They managed to convince me
Did you find this review helpful?yesno
»