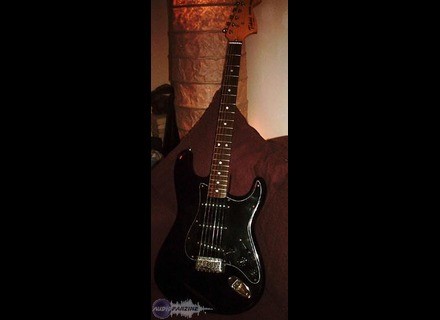 Tokai Stratocaster silver star "RI 72"
5
"Made in Japan" at a time when people were visibly attention to the quality of what they produced. The quality of the assembly body / neck is incomparable to the horrors produced by Fender guitars with its three assembly screws. I know what I'm talking about because I had some strat 70s.

The handle on mine is slightly V then thins and flattens as it approaches the body. The nut is rather narrow (42-43mm 39mm against a U.S.) but playing, you do not realize it because the profile of the neck is really nice.
The frets are fine and have been planned on my Tokai no buzz, no dead spot on the bends, it is nickel.

Mine is a gray métalissée. It is worn at the forearm and you can see the wood. It could be ash, but the guitar is lightweight (3.5 kg).

The handle is easy to play, with a patina of varnish which gives a very vintage side to this strat.
The original pickups are pretty good (gray coils) and I do not see the need to change anything on this guitar.
Mine is mounted 10-52 in Eb. The sound is superb without being too slammed as is sometimes the case with maple keys.

It is a strat, so we can all play with this instrument. I plugged into a Fender Bandmaster Reverb 1973 (head + cab 212) and this is the strat I have in mind. It also works well with crunch sounds or more saturated on my Marshall or my Mesaboogie.

Otherwise, plugged directly into the Mac, it can record without background noise with garageband.

I have a dozen strat suddenly it's not the one I play the most, but it has been a time when I had less instruments. I thought about selling it and I realized that the price of these jewels had climbed since my purchase. If some "buyers" remained on the prices of the 2000s, in 10 years, it has been multiplied by two. This is not a bad investment: a vintage guitar that you can really play and take in concert without incurring a fortune and should not be a problem for resale if you want to buy another instrument in a few years.

xbassman_K's review (This content has been automatically translated from French)

Tokai Stratocaster silver star "RI 72"
5
Made in Japan in 1979. Round 3 saw a pice Saddle 21 frets and rosewood fingerboard, large head typical of Fender 70's. Note the Tokai logo "spaghetti" banned from 82 after losing a lawsuit against Fender (3m this logo is an illusion: it is believed Fender read!). Body Sen (frne Japanese found today!). Fender vintage type tremolo with solid block of steel (aa its importance). Configuration microphones and classic knobs Strato, I changed the pickups for Tokai original Fender Custom Shop and adding a slecteur 5 positions (home he had only 3). The violin is extrment cares if not perfect, one step up from what Fender could do in the 70s (can not say it enough). Silver Star is a MODEL ST-80 (high end) 1972 reissue, there are indeed more in the range MODELS Tokai Silver Star: ST-38 reissue in 1976 (quite cheap, but quality Japanese all the same), the ST-48 1976 reissue too (not bad), the ST-60 reissue 1972 (mid range) and ST-100 reissue 1968 (4 screws and big round head, trs upscale but extremely rare!)

The handle is a bit late I got, narrower than a real Fender 70. D is the fact that these guitars originally taient Reserved exclusively for the Japanese market, and a Manir gnrale narrower sleeves are quite prissl there. As for the rest of the ergonomics of the guitar is similar in every respect one of the era Fender Stratocaster ... Including the weight, which is not ngligeable for Strato ...

I found the original pickups did not sound real, or they taient rinsed, or they are not great base. So I changed for real Fender Vintage 70's Custom Shop made a hand agrments slecteur 5 positions and new knobs (purchased on Ebay of course), and aa t magic! I Discoveries vintage Japanese guitar making! No doubt it is a Start and a good rev that fte Start today its 26 years! All sounds are the Strato and without any approximation. As everyone knows, the Stratocaster is a versatile guitar that fits any style of music, it's not n'chappe RULES. My preferences goes to position sounds crunch acute trsmchants trs, it bites! Trs beautiful sound "twangy" or "juicy" in the positions intermdiaires rhythm, but she can also prove effective trs big sound. What it lacks is perhaps be a little "fat" in the lower medium, but it is true that the t was never specially of Strato, no more gn ally guitar teams of single coils.

I possde this guitar for over a year, I use it mainly in the studio (I'm on scne gnralement bassist!). Basically this guitar is what I wanted: black / black plate / big head in the style of Strato's 70, but many guitarists deprecated me to buy a real Fender of that era (the lottery!) silent and out of the question either to buy a reissue rcente, because for me a guitar sound acquires its after 10 years of age (it's like plonk!), so I turned to the imitation of Japanese and I do not regret it. It's just a shame to copy so perfect, that the handle does not meet the exact dimensions amricaines, but the handle is a matter of got, and I do not doubt for a moment that it would be much guitarists (I'm bass player and I like tree trunks!). This is a guitar that I paid 250 (including tax and shipping) on ​​eBay in Japan, I have come to change the pickups for the nine (150 more), but is your exact more than satisfactory. It is INESPRE to find a vintage Strato 400 because it is indeed has! But news travels fast and even in Japan prices rise, so the Tokai Silverstar s'changent now around the $ 300-350 excluding shipping and taxes! Dpchez you then, because a report like the qualitprix is ​​unbeatable! I am, thanks this guitar has become a true passion for vintage stringed Japanese ...
Did you find this review helpful?yesno
»