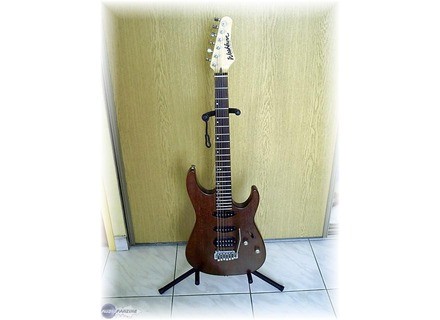 MG90, STC-Shaped Guitar from Washburn in the Mercury series.

linfalas's review (This content has been automatically translated from French)

Washburn MG90
5
Manufactures in the United States in 94, 22 medium jumbo frets, pickups config: a humbucker Seymour Duncan TB 5 Duncan Custom in bridge, 2 Seymour Duncan Custom Staggered SSL 5 in middle and neck.
The beautiful is a qipe vibrato Wilkinson VS 100, it possde switch positions 5, a transparent volume trs (knob hard, not practical for violoning but crachotte do), a Tone tr s efficient, self-blocking mcaniques Grover (good agreement, even in intensive use of Wilkinson, who is floating), a head of Silet bone, a body in two pices of Honduras mahogany, a handle Rabl (cut on quarter) D-shaped, radius of 12.5&#39;&#39;, Indian rosewood fingerboard, Fender Diapason. The hardware is anodized mtal inspires confidence, the feeling of durability. Bought new in 1995, she did not flinch, and I find amazement in advance for the era: it proposed dj current standards!

Trs enjoyable round, satin varnish irrprochable, as sweet as promised in my legs!

Access in acute slightly worse than a Fender: the heel is large (but Confre trs a good sustain, good sound non-branch makes the guitar live, unlike an Ibanez s Series S), the table is flat and the horn infrieure is not chamfered, so a CASC nickel until the 19th fret, then APRS is a bit more roots! ...
This guitar is well balance, the different bevels of the body make it easy to play but a good wide strap is comfortable and well ncessaire: mahogany fault!
However, I had played 3 4:00 a row without having to power of kin! (Though I have in the family!). Finally, I can always cinma ngocier for a massage to my girlfriend! Lololol!

Even if it is easy to play, I deprecated for beginners for the reason that follows.

In terms of sound is a guitar that is not a Personal dbordante such a T a Start, Les Paul or other but it is the game of trs Fidler musician: it is this aspect that made me buy it ENTSO in the week that followed! Let me explain: I was 17, I played for 2 years and I Contet of Annona btement riffs mtal large groups, and I was not a great musical personali: I an essay in the magazine that she Ibanez JEM 555, silent much more flattering, "but I&#39;m H, Go! WAOUWAOU WWWWRRROOOOAAAAAWWWW"
So I cost the seller, then I ENTSO ... Then I "grew up", I diversified my directory, I have my sensitivity dvelopp game, then the! the slap! Versatility, rich harmonic magic c&#39;tait my motions, and not those of the designer of the guitar transparrassaient

So the is me playing on my guitar, not the guitar that used me!

Scratch my friends are jealous! If so ... they wonder if they do not go out often dictate the brands! ...

So it&#39;s a guitar aficionado, otherwise dception station!
Well, the only downside is the cart output level between the humbucker and 2 singles, inhrent this type of config. So, I do not give it full marks.

As for sounds, here&#39;s a humbucker that kills, a bit messy in the high mdiums but kills even when (not intended Slayer, but may do so by correcting rglages the amp), the trs round of micro serious positions intermdiaires idalie for Effects (+ chorus raaahh cho ...) the microphone as he trs Middle Tees IDAL the funk or the Country ... (but VOUUII, I diversified you see!).

I play mostly rock, and funk mtal progressive-rock, so the relative neutrality of the guitar I use normment.

The pros: the quality of stringed instruments, microphones perfect ergonomics, sound
The -: Access in acute perfectible, that Washburn is only slightly REPRESENTATIVES trs in the chopper

I pay the fine 7500 F (about 1145) with a strap beautiful Tobago, the strap-locks Dunlop, a jack 3m Whirlwind, and especially the custom hardcase brand Washburn!

The seller did not dtrouss but he did not particulirement gift!

I think with the exprience, I remade this choice, but I must say that the ball of not having enough money to pay me the era of the others, because I &#39; have done good business note with the RBM, which we know the score now ... Finally apart from mine, these are guitars that are fast becoming collectors of ... Snif! :-(
The concern is that Washburn has had a chronic problem of distribution in France for several years has left its place the Competition, and in fact, the guitars are often the resale values in France compared to US, where they are most valued.
Of all the fawns, I do not want me Sparer! ! !