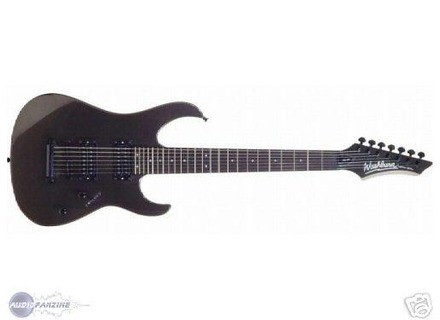 WG587, STC-Shaped Guitar from Washburn in the WG series.

Washburn WG587
4
I bought this guitar at Steve's Music Store and I paid around 400-500 Canadian dollars for it, which is a great deal for a guitar of that quality.

I like the screaming sound delivered from its humbuckers and the "twang" of the single-coil pickup. The Floyd Rose bridge gives more versatility in sound effects and neck is makes it easy to reach the high frets.

The pickups that come with it aren't as good as Seymour Duncan pickups, but they're still good for that range of quality.

The nut is a bit too close to the frets and can sometimes make buzzing noises, but that's always adjustable. The Floyd Rose Bridge needs a bit of an update in quality of material.

It delivers great sound for a great price and the product will last for more years than you can imagine.

It has an amazing clean tone to it every note is heard without flaw very full. Sustain is rather well on this i bought a decimator for my other guitar this one you can play without it.

It looks rather tacky but im looking for a perfect sticker for it right now and it will be awesome. It didnt sound like my kind of guitar at first but after 20 minutes it sounds great it has its own personality. The neck is little chubby but the sounds is just amazing and it takes like 2 days to get adjusted to it and your happy.

Its durable, very. A little thick in body and neck. It came in like perfect condition not a nick on it or scratch.

Washburn WG587
5
i got this guitar from music123.com after quite a lot of browsing. i decided i wanted a seven string with a fixed bridge (so i could mess about with the tuning) because of the amount of metal i play. i saw it on the site and it was apparently reduced from $1049 to $249 with a free hardshell case. in fact i got the thing, and then about 2 weeks later i got another free case. although it was so cheap i did get a bill for tax which was about another £50, but that's still really cheap.

the first thing i loved was the amount of sustain this guitar has. the note just goes on forever. the pickups at first for some reason didn't seem to connect with me, but now they seem great too. the tuning system is also really good. it has the 'buzz feiton tuning system", which seems to work like a charm. dropping down a few steps only takes one retune, not many like a lot of guitars out there. the guitar on the whole was really great value. it's much better than my bc rich warlock which i paid £470 for.

there are a couple of things i don't like about the guitar, but they're not major. firstly the neck is slower than my warlock. it's not slow enough to be a problem though. secondly i'm not sure what the built quality of it's like. it seems ok, but there's a few blemishes on it, like some cracked paintwork around the neck joint, a chip in the fretboard and the strap buttons move (:-/). but like i said, for the money...

like i said i'm not sure about the quality. vfm it's superb, and other than what i've stated there isn't anything bad about it. nothing's gone wrong with it yet.

it's the best guitar i own, and half the price of the other.

Washburn WG587
1
The WG587 was the first seven string I ever owned. It was real cheap, and I wasn't sure if I was going to like a seven string guitar or not. Given the price, I decided to check it out. It features a maple neck, rosewood fretboard and alder body. The bridge is a standard TOM style bridge, comes equipped with two humbuckers, a volume knob, tone knob and three way switch.

First off, mine might have just been a guitar built on a Monday, but this thing was absolutely horrendous. The back of the neck had scores on it where I guess the fret slotter got a bit too crazy. It felt absolutely awful. The finish was terrible and was extremely fragile too. The nut was cut badly and would constantly bind, so there were always tuning issues. The frets weren't leveled nicely, and the edges were sharp. I soon found out I don't like TOM bridges that much. It would always dig into my palm, and the angle of the strings in relation to the body was quite foreign to me at the time. The neck was on the thicker side, so it was a bit of a pain getting used to the low B string.

The stock pickups sounded absolutely terrible, but I never bothered to replace them. The electronics and hardware are pure trash, too. This thing definitely needs a pickup replacement. I thought about replacing them, but I'd be spending more on pickups than the actual guitar, so I decided to just off the thing and not deal with it anymore.

I cannot recommend this guitar to anybody looking for a seven string. Even at its price point, I recommend you stay away. If you want a budget seven string, look into getting a used Ibanez, used Schecter or a used Agile. All three of those brands build better guitars than the budget Washburn line.
Did you find this review helpful?yesno
»
Read the 6 user reviews on the Washburn WG587 »