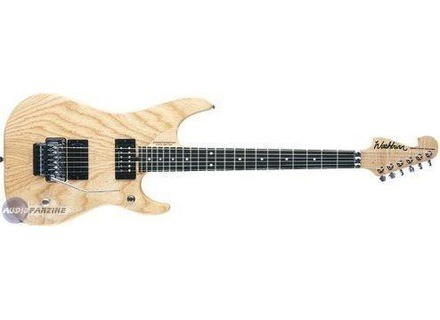 Washburn N4 ESA
4
(Originally written by Endrix/translated from Audiofanzine FR)
I bought this guitar in a store because the shop assistant convinced me to buy it. I had already heard positive comments about it. I'm a Bettencourt fan and I already had a Padouk.

The very pleasant neck with perfect fretting is the guitar's main asset. It's perfect for modern techniques (tapping).

Access to the upper frets is just fantastic. The guitar is perfectly ergonomic, it's a super Stratocaster.

The neck pickup sounds very interesting for clean sounds and you can almost get jazzy sounds, but that's not the main purpose of this guitar though.

The middle position is also ok but you'll get the best sound with the powerful bridge pickup alone.

Its only weakness is the lack of versatility. Either you want to play heavy metal or you'll have to buy a second guitar for other music styles.

This guitar is perfect for heavy metal and allows you to play some other things like Hendrix licks (don't forget that Bettencourt is a Hendrix fan... the inverted head is actually a homage to Jimi Hendrix).

I play it with an all-tube Marshall JCM and a Soldano and it works fine.

Every sound of this guitar is useful.

I've been using it for one year.

I also own other guitars: ESP, Ibanez, Fender, Gibson.

I find the value for money is average.

Based on my experience, I wouldn't buy this guitar again (my Padouk is much better) although it does have undeniable qualities.

It's not a bad guitar but its value for money isn't fair.

I think Washburn (and maybe Bettencourt?) makes a lot of money with this guitar.
Did you find this review helpful?yesno
»

Washburn N4 ESA
4
For those who want prcises information, it would be useful to go look on the manufacturer's website rather than here, there are also other opinions on this guitar are Extremely sharp and complete.
But I would add, as the owner of it and here for résumé without being very accurate =):
This is a guitar factory in the US (it is between Canada and Mexico)
ESA = Ebony Swamp Ash
Micro: Seymour Duncan 59 and Bill Lawrence
Washburn by Schaller Floyd (that's less than the original Schaller because the alloy is of lower quality so in the end it is aging badly =====> thank you PM)

This is a guitar lightweight, pleasant, the grip is immdiate.

I love the head backwards, gave him a look gnial.Au departure I acquired N2, and so really very fan of Nuno Bettencourt and above because at departure I did not have enough money, I ended up giving me this wonder.
I put 8 because I think be objective enough, they could change even when the bill lawrence and put a push-pull ...

The neck is super comfortable.
The guitar is really pretty, it's also only I bought ... and for the price I will not have fun buying a guitar that does not please me, and especially without the try before .... last I said was, I said nothing ...
Even when I flash it before, I've tried many times, in a lot of various finishes etc ...
The head is a spill of the characteristics of the series N, should really be a little weird to buy it, and then not to love after ...

As I am a fan of Nuno, I know his signature model will probably not be very loign sound of his albums ... and yes Nuno does not jazz or salsa or classical or the mouelleuse pop.
He played in a hard rock band ... yeah ... with very fat and powerful distos.
At the same time, 2 humbucking pickups ... I say I say has nothing ...
It is true that the base, it is a bit limited, just replace the bill lawrence by Bill and Becky + a push-pull and kisses.
There is such a thing called the volume knob, if a running play on microphones of output power without really turn down the volume ... I do not express myself very clearly sorry (I'm dtenteur as a N4) but basically you can spend much distos sounds very nice crunch sounds just using the knob.

I use it for less than 1 year (not quite, but let prcis: 8 months 3 days and 2 hours)
The particular feature I like most is the handle, the dcoupe (dcoupe = the shape of the guitar), the head backward (backward = backwards).
I tried a lot of models (other guitars), I must admit that this guitar is a marvel (I like it)
It is lightweight, small, really when the branch we are surprised by the power output, it tears =)
For a model signature, I think it is really affordable (it is not too chre)
I remake that choice without hsiter .... not ... bientt should not =)

It is the custom shop quality, this is not anything not.
It comes with a solid flight case, I actually t quite surprised by its quality and size ... it's standard by the guitar !! =)
At the same time it is true that they have managed in fender all their models and they are all of irreproachable quality ... no no they never had bad s ries ...

PS: it is not to maintain a certain cult of contradiction, but that the handle moves and that's the problem Recurring N4, it's good pee so I chat.Moi rgler of the handle ... like on my other guitars ...
The guitars are wood (can not be any), until the one agrees, wood moves with time, the rate of hygromtrie etc ...
Moving the handle of the problem is a problem Recurring all guitars ...
The N4 may have this problem all: no. The recurrent word is not valid if it is not on the same guitar whose untimely rglages the handle is carried .... if that's the case, yes is a default has .dropoff window
But if the forum says, then it's true, everyone knows that a forum is an undeniable source of truth.
A good guitar tries before you buy.
Did you find this review helpful?yesno
»

Washburn N4 ESA
5
This must be corrected on the false legend Bill Lawrence pickups.

N4 is the team of Bill Lawrence USA microphones, microphone conus by Will Lorenz Stich and manufactured in the factory that possdait 1982 1984 with its associated Jzchak Wajcman.

Will Lorenz Stich result has financial problems has CDER's rights in society the Third National Bank, as Jzchak Wajcman repurchased pongeant liabilities of its former associated.
The Bill Lawrence factory has always continued to produce the same microphones estampills "Bill Lawrence USA" after the departure of its designer, like Fender Stratocaster and continue to produce after Tlcaster s the departure of Leo Fender.

Willy Stich continued its activity design, or as a consultant for major brands, either through its own societies, OBL in Germany and then "Bill Lawrence". Since May 2007 and stopping the California court, Willy Stich has no right to sell pickups in the US under the denomination "Bill Lawrence".

fraprim's review (This content has been automatically translated from French)" It's not bad ;)"

Washburn N4 ESA
5
For those who want accurate information, it would be useful to go look at the site builder rather than here, there are other opinions on this guitar that are Extremely sharp and complete.
But I might add, as the owner thereof and to summarize here but not very accurate =)
This is a guitar made in USA ESA = Ebony Ash Swamp
Micro: Seymour duncan 59 and Bill Lawrence
Schaller Floyd by washburn
This guitar is a light, pleasant, the grip is immediate.
I love her head thrown back, it gives him a killer look.
Initially I acquired a N2, and then being really a fan of Nuno Bettencourt and especially because at first I did not have enough money, I ended up giving me this wonder.
I put 8 because I think I'm objective enough, they could change the bill lawrence anyway and put a push-pull ...

The handle is very nice, it's good for those with small hands.
Access to acute is just great, the concept is innovative even if it was designed 20 years ago, which makes the guitar even more apart.
Ergonomics is rather classical form stratabound, but hey I think she looks great.
It becomes very versatile once the push / pull installed ... from there you can find sounds and more nunos be lots of different sounds by playing with the volume knob.

I play a Peavy Classic 30 and an Orange Tiny Terror: clean sound, it can make a killing when moving the microphones in singles.
Mostly I use my little Vox DA5, then I can have fun finding a bunch of crunches sounds great and even have a good saturation ... history play a set of extreme.
I hang more with the bill & becky (L500), I do not regret the exchange with the original microphone. Harmonics come out by themselves, what is astonishing is that he transcribed all the nuances without alter.
The guitar is faithful to the guitarist and it does not make gifts.

I use it for almost a year. I bought it in Canada 1000euros, much cheaper than in France ....
The feature that I love most (finally): the handle, cut and access to acute.
I have tried many styles and finishes with wood it gives differents.Celui clacking sounds and bright.
This is the model I wanted, I had an N2, it was great but the N4 is well above.
The quality / price is right, this is a fairly expensive guitar, but hey it's a signature model with a custom shop quality delivered in a flight case competition.
I remake that choice without hesitation.

Did you find this review helpful?yesno
»
Read the 8 user reviews on the Washburn N4 ESA »