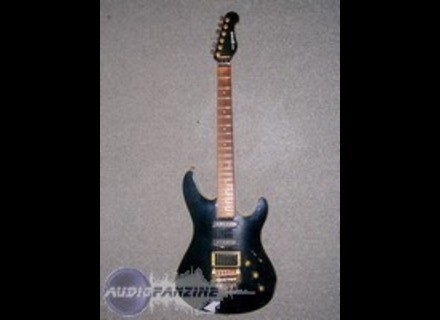 Yamaha SE812
5
Guitar designed to accomplish by Rich Lasner in the California study office Yamaha and assembles in the custom shop brand in Japan. Manufactures and sold 1,000 copies in the neighborhood of 15,000 francs is to say 2250 euros, the price of 3 fender strat US standard of the era ...

This guitar is best known in France for t used by Jean-Jacques Goldman but many have played famous guitarist Scott Henderson Blues Saraceno, Jenniffer Batten Franck Gambale (which will be more tards own mod the home yamaha) ...
In short if it suits all its big names, it may well suit the guitarist the corner. Really 10/10

Playing comfort and fabulous sounds of another world! The handle is extraordinary that either solo or rhythm guitarist ...

The Maple dgage a more ample and warm as alder used by Fender.
The pickups are fantastic, much warmer than the fender, ideal for blues, jazz, rock and even the Mtal because they have a high definition notes.
The double is powerful, sharp and singing it offers madness sustain while remaining percuant. Splitt he loses in scope but typically sounds Fender Stratocaster.
Briefly, 6 crazy sounds under your fingers.
I repeats, it really sounds ten times better than a fender and is much more versatile.

It's clear we are in the very high end, but hey it's been 15 years that I have and it has no candles in hand gilding. I have also a fender deluxe achetercemment but I t trsdu compared yamaha is a toy. I also used an old Gibson Les Paul to muscle my fingers (the handle is a tarpaulin) ...
A rare guitar from Jean Jacques Goldman I have never seen another franais the possdant. 10/10
Did you find this review helpful?yesno
»

Yamaha SE812
5
I'll just say that rpter notice prcdent ... I bought mine 1800 euros on a guitar site vinttage. It belonged Jean-Jacques Goldman according to the site where I purchased. It is true that I have a picture of an item or it plays exactly the same guitar, same color etc ... When you know that there are only 10 copies in France, c is therefore very likely.

- Solid Maple Guitar sche several dozen anne (ct my fender sounds like a piece of plastic!)
- Acoustillage plated gold, but that tends to tarnish
- Pickups Di Marzio conus specially for this model, they are gravs SE 812 behind, made fun.
- Maple handle any beauty with Rio rosewood fingerboard.

I changed the original floyd rose because it was gold and I found a little too conspicuous. I put a black instead I rgl order played with the palm above, moreover I served rare ...

For the quality of finish, I can not see what we could blame this guitar ... This is the largest class! It was worth 14,800 francs in 96!

The handle is doing whatever people playing blues to Mtal. We quickly glides up boxes desti- nations most recently, it is so easy to play that when I take my fender behind, I can not be too comfortable. Beware the fender neck is super nice too but it is a step below in terms of comfort. With the system "super playability" access to the desti- nations most recently boxes is a breeze.

The vacuum sonority is beautiful, it's a good sign.
Taken up by the microphones we get a sound very full and deep slamming or as rglages. It is warmer than the standard least pinched strat closer to a series L (60s). has typically rings Mark Knofler.
The dual adds versatility and can play solos with call of Chalaur and presence. This is not something like a nag Emg 81, one can have normment shade. Split single one obtains the slamming of a Stratocaster.

Note that the microphones do not tend "purr like Fender pickups" they are completely silent, making studio is REALLY more.

If the 812 is really a pro guitar Fawn of Shur or Tom Anderson. I do not regret the price paid for it is really impressive, more I tell myself that it was Goldman's fingers on her and saw Bercy full crack.
I just sold my standard fender to buy a Fender 62 'new old stock 3000 euros. The sound is very comparable with the yamaha perhaps less precision. So I end up with two guitars almost having the same sound. So I will definitely sell the Yamaha to buy a Gibson story to have a big inning difficult to tone my fingers ... Finally I still hesitates because I remember having sold a Tom Anderson I still regret I am afraid that the same thing happens to me but on the other ct I'm not a millionaire!
Did you find this review helpful?yesno
»

nebs's review (This content has been automatically translated from French)" "Fabulous""

Yamaha SE812
5
This is my own photo illustration I touch to 14,500 francs apparemmet there was a model for each big city ... Well at least we are the 3 poss der!
I'm not going to add anything further notice this upscale yamaha no worries: a Grave holds the road!
Personally I'll fool that I played with Jacques Goldman is this model, for cons I saw Moon Martin draw a sound norm! boston amazing there a few years on an amp fender bassman. But hey, that's Moon Martin!

The guitar fits in the time except plqu gold tarnishes.
The finish is nearly millimeter. This is one of best guitars I've had under the fingers ... And I had tons!

Perfect ergonomics and crazy sounds. Ultra comfortable handle, faster and easier than a fender strat without being flat as a Ibanez handle, ideal for playing Knofler as well as plans over the compliqus satriani. From blues to shred, everything goes ...

The output level for passive pickups boggles the mind.
On the clean channel sounds are clear and crystalline, with heat that a US default standard fender. We are in the register of a fender L series (1960's) who snapped 10,000 euros on the vintage market.

In overdrive, the guitar shows its heat, it is some lights years of a fender strat base, it's the sound we love very steve Ray Vaughan ...

In short, it is in the registry and Hard Rock Blues guitar that excels in this area, it is unbeatable. The sound is between Gibson for heat and fender for ct ar and slamming.
In short guitar sounds great!

Rare and beautiful guitar, it offers a magical sound worthy of the Fender Custom Shop Custom or better. If he reads my opinion, I dconseille the author of the opinion prcdent to sell, especially to buy a Gibson that everyone knows that the finish is randomized according to the models .dropoff window And above all why would a handle Bcheron. The Yamaha was the trunk of a Gibson, is much more versatile and sends divine sounds!
So a very upscale Rserver in very good guitarists guitar, evil does not deserves. Ms. 4000 euros it would be a bargain!
Did you find this review helpful?yesno
»