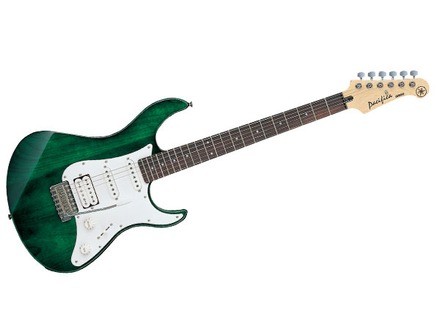 Pacifica PAC112, STC-Shaped Guitar from Yamaha in the Pacifica series.

Yamaha Pacifica PAC112
4
The Yamaha Pacifica 112 is one of the best beginner level guitars that can be bought in my opinion. Yamaha has a longstanding tradition of quality and their guitars are consistently quite easy to play, feel great and have tones that put them well ahead of their price range. This particular model has an alder body, a maple neck with rosewood fretboard and 22 frets, sealed chrome tuners, a standard tremolo bridge (non locking) and three Yamaha pickups (a humbucker and two single coils). This model also has a very groovy natural finish, though it's available in many other colours too. These guitars are typically built in Taiwan, as are many other Yamaha guitars.

The design of this guitar is fairly nice. It's a bit different from a Strat, but I do find it easier to get around and play on. The guitar is reasonably light and sits well on the body. The contouring is good and the upper fret access is definitely superior to a traditional Strat (though not as a good as say, an Ibanez or Jackson). Getting a good sound out of this guitar is pretty easy. Though the stock pickups aren't exactly the quality of higher end models, they do have a decent enough tone to play on, especially if you're just starting and you can go from clean to mean fairly easily.

This guitar is nice in that it sounds great both clean and distorted. Having the humbucker at the bridge is great for being able to go from brighter and more trebly single coil tones to a heavier and thicker tone for rock music, and also cut down on the noise. It sounds great both clean and distorted and works well for a variety of musical styles to my ears. I've tried everything from jazz to blues to classic rock to shred on this guitar and it responds quite well to each of them. Even through cheaper practice amps the guitar has a nice sound that is free of being buzzy or muddy, definitely a good sign in a cheaper instrument. With a pickup upgrade I'm sure it would sound even better, but as is it's not bad at all.

All in all I think the Yamaha PAC112 is a great buy for anyone looking for a quality instrument for not a lot of money. To me these guitars blow away any Squiers or Jay Tursers, etc, in the price range and they're just a better buy all around. You can find this guitar for as low as $100 used if you're smart at shopping. Unfortunately Yamaha products don't have a great resale, but that just makes it easier to pick up one of these from someone who doesn't know how good a guitar they've got.
Did you find this review helpful?yesno
»

Yamaha Pacifica PAC112
2
Yamaha produced a huge number of these guitars I believe starting in the 80's and 90's. They were in just about every single music store in the world. The were extremely cheap and just about anyone who saved up a few weeks worth of wages could slap down enough to own one.

They are build similar to the Fender Squire Stratocatsers. The are pretty loosely built in a way that they feel a little slapped together in the factory by some machine pumping out several hundred a day.

The tone of these are much better in comparison the the HSS Fender Squire guitars. The pickups seem to resonate much better and have a better attack feel to them. They still seem to carry quite a bit of noise overall, but they have easily be switched out for a Seymour Duncan pick.

These guitars work in just about any situation you put them in. Since you have a humbucker in the bridge and two single coils going up you can pull off just about any tone or style of music you have a desire to play. These are versatile guitars and will serve the owner well with good tones for the money.

The value of these guitars is what they are known for. Just about anyone can afford them. I would recommend this guitar over the fender Squire guitars of the same price. They have just a little bit better feel to them that makes me choose these over the Affinitys. They still are beginners guitars and you will feel that if you have any experience with real American fenders.
Did you find this review helpful?yesno
»

Yamaha Pacifica PAC112
2
I believe this pacifica was made in either indonesia or china or taiwan, though I can't remember exactly it was over 10 years ago. This was my very FIRST electric guitar. My mom was nice enough to buy this very first guitar for me, which actually affected my buying decision considering I wanted an Ibanez. Oh to be young and have no money of my own..

on paper it's a decent list of specs, everything you'd get on a more expensive guitar, just lower, generic versions of it.

It's basically a strat shape slightly modified but still has all the contours so it's comfortable. The neck joint was a bolt on but the upper fret access I remember was either just as difficult as a regular strat would be or slightly more difficult.

Everything worked on the guitar, I actually kept this for a very long time after I started to take guitar seriously and realized how much of a rip this guitar really was. In today's world, a guitar that's $300 COULD be a pretty high quality guitar, everything's gone up in terms of QC, but when I bought this, I didn't realize how crap it was until I played the Ibanez that I always wanted.

The one positive about this guitar was that it was my first so it has sentimental value and I could beat the crap out of it without worrying (this was years after I played a lot and acquired more gear of course).

I used to use this through a peavey express 112 and then a peavey bandit 112. Both of which are essentially the same amp with a speaker upgrade and slightly different features. I'm reviewing this as based on what I now know and the 10+ years of playing guitar.

Sound wise, it was nothing to write home about, I knew nothing about what a good guitar was supposed to sound like anyway. Though I did own the guitar for a long time and modded the hell out of it with a huge variety of pickups over the years which improved the guitar a LOT more.

Basically both the neck and middle pickups were useless individually, the 60hz hum was always there. The blending position did sound decent. Though I never used it. I was almost always on the bridge position since I didn't know any better. But looking back, it was shrill and sterile and almost always too trebly.

This is a complete beginner's guitar. The trend for beginner guitar players is that they usually get something cheap that's been recommended to them by the salesman and just play it and work with what they've got. Some of this attitude is greatly under-appreciated as most advanced players nowadays have become DIVAS over the simplest things, while some of this attitude needs to be corrected.

From what I've learned, and to be very specific, it is generally not a good idea to get a cheap guitar begin with. Not only is the setup most likely going to be horrible but it has no resale value. Thus you will end up with extra junk in your household AND the way it plays can be a HUGE demotivator for the beginning guitarist. If you're gonna buy a cheap guitar, get it setup right AT LEAST, to get it going!

After I played on this guitar for years and learned more and more about guitars, setups etc. and modded this guitar, performed many experiments on it I came to realize that it's a good beater guitar for experiments. I've gigged with it too, and remember having tuning problems. So it's definitely not a performing guitar, at least, not for me it wasn't. I wouldn't buy this guitar again, it was too expensive for what it's really worth and I shouldn't have chosen this guitar as my first. I only did for the price point, but you get what you pay for. Haven't told my mom of course, she'd weep!!
Did you find this review helpful?yesno
»

- The guitar is very ergonomic and easy to play sitting down. It's very light (but I'm a boxer so everything seems light to me... and then I break everything XD)

- Great sound. I use mainly the single-coil pickups: the sound is very good and versatile. I can play Rammstein or Noir Desir and a friend of mine even plays reggae with it. I use a distortion pedal and the clean channel of my amp. It sounds great.

- From rock to heavy metal and reggae, the guitar is very versatile. If you want to play death metal, choose another guitar.

- I play it with a 15 watt Yamaha amp and a FAB distortion pedal. The sound is perfect. I use the distortion of the pedal and the clean channel of the amp.

- The guitar sounds aggressive with strong highs when distorted (perfect for industrial metal) and its clean sound is smooth and articulated (wonderful for "Nothing else matters").

- Pros: versatility, sound... Almost everything except its look, which is too basic

- I tested a Les Paul, a Cort and an ESP. This guitar didn't disappointed me because it's the most versatile one.

- Perfect value for money: I bought a pack that included the guitar, an amp, a cable, a gig bag, a guitar strap, a tuner, two string sets, three picks and care accessories... Everything from Yamaha!

- I won't hesitate to buy it again if mine gets broken.
Did you find this review helpful?yesno
»
Read the 27 user reviews on the Yamaha Pacifica PAC112 »

Listen to the 8 audio files about Yamaha Pacifica PAC112 »