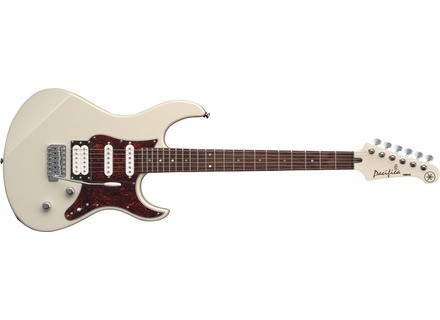 Pacifica PAC112VCX, STC-Shaped Guitar from Yamaha in the Pacifica series.

Yamaha Pacifica PAC112VCX
4
i purchased this guitar in holland for about $200 as a first guitar.

its a very good beginners guitar as i played some other guitars too. it sounds very good overall. i used this guitar for rock, metal and some pop and it sounds pretty good.

its out of tune whenever you look at it...when you use the tremolo you can be sure you have to tune again. i dont use me tremolo anymore.

i can think of better guitars but $200 isnt much for what you get.

every PAC 112 is different as i dont have the problems mentioned on the other reviews. thats the problem with a big company that makes other products aswell as guitars

Yamaha Pacifica PAC112VCX
5
I've been rentring my Pacifica from Mother's Music for $25 cnd a month, and if i were to purchase it, that would $350.

My only (stupid) complaint, is the bolt on neck, and trem. I prefer both neckthrough and hardtail, but these both serve their purposes well on this guitar.

This is probably the guitars strongest point, especially for the price. No question this thing will last for life. I would absolutly gig with it, no worries, and can never see it breaking down in the future. Always stays in tune, very solid and very light.

If your budget is under $400, then don't bother looking around much more. This really is a tough guitar to beat, and will soon gladly buy one to go with my other Yamaha. They make some incredble lower end guitars, especialy compaired to the bigger names, who pay so little attention to their cheaper models. There really isn't a reason not to buy this guitar. Great playability, and if you want a different kind of sound, just switch the pickups. I give it the 5 compaired to other guitars it's price, and compaired to say, a $1000 guitar, it would still rack up a 3.5.

Yamaha Pacifica PAC112VCX
4
I acquired this guitar at Toews Music for $300
Canadian. It was a great deal.


This guitar is a wonderful buy. Unlike many guitars in
it's class, it has a humbucking pickup in the bridge position, and
bluesy sounding single coils in the mid and neck position. It stays
in tune no matter what you're playing, I've tried all kinds of
different blues licks, even some Satriani, and nothing seems to knock
it out of tune. It has wonderful sustain, and the amounts of
different tones that can be coaxed out of this baby are amazing. I've
played everything from metal to punk to blues on it, along with quite
a few styles in between. It has one volume and one tone control,
along with a five way pickup switch. The finish was a beautiful
metallic red, unlike some of the drab finishes on other guitars in its
price range. It's an all around great beginner to intermediate
guitar.


The tremolo arm on this guitar is really low
quality, it's just a standard screw in, and the saddles of the bridge
are a little bit buzzy on the open D, but aside from that, no
problems.

The construction is fabulous, with an alder
body, maple bolt-on neck, and 22 fret rosewood fingerboard that is
lightning fast. The paint job, as I mentioned before, is beautiful,
and even using tone altering techniques such as putting pressure on
the guitar's neck, I haven't had any problems with anything.


This is a fantastic guitar, especially for the low price
I paid for it, and it's just as good as some guitars that are twice
it's price. Like I said it's only downfalls are the tremolo and
saddles, but aside from that, I'm completely satisfied.

I play on a small tube combo 15 watts.
The humbucker is dynamic, rich sound and balanced.
Two simple, low output level, but rather slightly crystalline screaming for me (it is sufficient to play on the pitch)

I have other guitars (Les Paul, Ibanez Prestige) but I always get my sound to PA112 type Start.
Excellent value for money