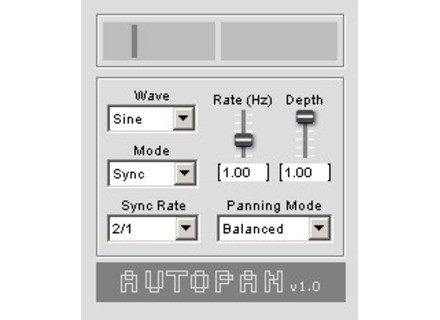 Oli Larkin AutoPan
4
Oli Larkin's AutoPan plug-in is a free VST plug-in for Windows operating systems. Oli Larkin has a bunch of free plug-ins in this format, with this being one of the simplest of the bunch. You can download the plug straight from the manufacturer's website, which is an easy enough process. Unfortunately it's not a plug-in that's available for all users, so make sure you're compatible before going any further. The interface of the plug-in is very simple, and everyone should be able to figure out how to use it regardless of experience. It's got controls for waveform, mode, synch rate, panning mode, depth, and frequency rate. Basically you get a few different LFO shapes to choose from here, but you're pretty limited in the amount of sounds possible. It is easy to use, so a manual isn't necessary nor do I think one is available.

I'm not running the Oli Larkin AutoPan plug-in anymore as I don't have a PC for music anymore. When I did have it, I was running it in Cubase SX. I had a Hewlett Packard Pavilion dv8000 notebook with a 3.0 Ghz processor and 2 GB of RAM and ran everything through a MOTU 896HD audio interface. I can't imagine that anyone would have problems running this plug-in as it takes up just about the least amount of processing power possible.

While not the most impressive sounding panner, the Oli Larkin AutoPan plug-in is still worth having around since it's free and easy to use. I didn't use this all that much when I did have it on my old system, but it was one of the only auto panning plug-ins I had so it was definitely good to have just in case. It's only going to be available for Windows & VST based DAW's, as is the case with the other free Oli Larkin plug-ins. They're worth having around for those who are able to run them, but they're not the best in general, although definitely useful. I can't complain at all about free plug-ins, so you should definitely try out this AutoPan plug-in for yourself if you're a fan of free plug-ins like I am!
Did you find this review helpful?yesno
»

Other categories in Surround Sound/Spatialization Software