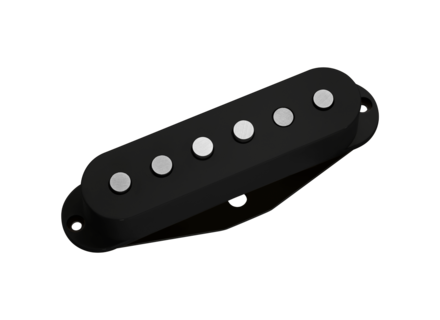 DiMarzio DP116 HS-2
3
The DiMarzio HS-2 is one of the original pickups that DiMarzio developed for the Stratocaster. It uses “stacked humbucker” technology, which means that one coil is placed on top of the other to give it the look of a single coil but help keep the hum down like a humbucker. It features four conductor wiring, an Alnico 5 magnet and staggered pole pieces.

The HS-2 is one of the pickups that Yngwie was first given before he used the HS-3 and eventually the YJM (now called the HS-4). This pickup has less output than the HS-3, and it also sounds cleaner. The low end on this is fairly pushed back in favor for some higher end treble. The bumped up treble helps keep the pickup sounding clear and crisp, but it can also get overly bright depending on what guitar you put it in. The midrange is fairly even with nothing really noteworthy going on.

DiMarzio says that this can be used in any position, but given how low the output is, I pretty much use this exclusively as a middle pickup. In the neck, I find it is too bright and lacks the power I want. In the bridge, it’s way too underpowered and is overly bright. In the middle, when it splits with the neck, it delivers a fairly nice, clean tone that’s great for clean passages. The pickup seems to prefer more neutral woods like basswood and alder, but it should be able to be used in mahogany and ash without a problem. I’d just be careful if your particular piece of wood is bright sounding as this can get a bit too harsh in the treble frequency.

Given how low output this pickup is, it’s not one of my favorites. When I put things in the middle position, I generally want them to be super low output and clear sounding. This can do that tone fairly well, but I feel there are other pickups out there (such as the DiMarzio Area ’67) that work better in the middle.

J-mix's review (This content has been automatically translated from French)

DiMarzio DP116 HS-2
5
This is a micro-format standard single-coil with two coils bunk. In this way, it does not dnature the look of your Start. Eric Johnson's mounted on some of its strata.
I recommend it in a central position or handle on a stratum, or in a central position between two doubles.
You have two options, either you follow the wiring Dimarzio (no split) and have a clean, free of hum. This was not my choice prfr because in this case, even if the sound evokes a single coil I think it really lacks something ...
This is something you find funny if you split the microphone. Then the incredible, you rcuprez potato, better in the treble DEFINITIONS and low and you reduce by half the level of a hum from single coil. A great compromise is.
I have tried many micro noiseless and it said I think one of the best (way ahead of the Virtual Vintage) at least one of the best choice for who wants to keep a true Start sound without too much background noise.
Did you find this review helpful?yesno
»