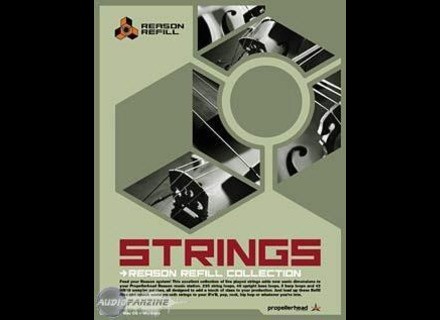 All user reviews for the Reason Studios Strings

Average Score:2.5(2.5/5 based on 1 review)
Not satisfied with those reviews?
Our members also liked:

Reason Studios Strings
4
This is a bundle of string samples, for use with the Reason application. Reason is a pretty sweet DAW that is more midi-based. Thus, the need for string samples. These are loops, not multi-sampled instruments. They come in the form of REX files, which means that they can be shifted to fit tempo and pitch. The setup of this bundle is really easy, all it takes is having reason installed on your computer first.

I know I may be biased in my opinion, so that's why I'm going to say that for what it is (a collection of pre-recorded string samples) Propellerhead Strings is a good product. However, I can't recommend that you use them in your original compositions, because frankly, it will no longer be as original. Make your own string samples! It's a good price, though, and if you are just a dabbler in this and don't mind making uninspired music, I would say you're in for a treat. Have fun getting all the creativity done for you.
Did you find this review helpful?yesno
Cookies help us improve performance, enhance user experience and deliver our services. By using our services, you agree to our use of cookies. Find out more.