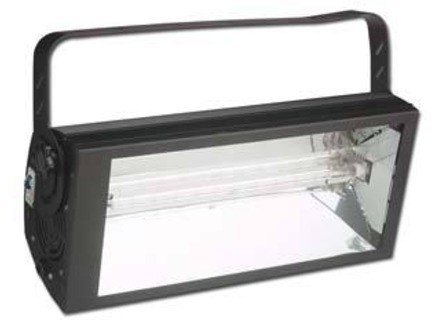 Dj jéjé's review (This content has been automatically translated from French)" Not really pro ..."

Contest STB 520
2
I use these machines club since September 2012.
This is a fairly popular machine that has a lot of people, and apparently in quite satisfied, however, for my use it is not a very competitive product with its quality.
Who says use club, said use "intensive", not in the sense of Strober permanently, but in the sense that the machine is turned on several days each week, and a malgrès not really intensive use, showing signs of weakness After a few months after buying new.
The features are not bad in themselves, two-channel intensity, speed and armor function. Only, or that there is sin in the design and manufacturing quality.
This is the Chinese component neither more nor less, feeding problems, strobe which freaks, of really poor quality original xenon tubes ... already three failures on 3 machines in less than a year ... It is puzzling. Meanwhile in another club, I own FL1800D Geni (also sold under many other brands, JB Systems, Dune, MacMah etc.), which certainly does not function blinder but turn smoothly for 3 years and yet are more stressed than the STB 520.
Brightness level, it is still below the FL1800 is average.
Very very blah as a machine, it is better for a similar price. Note 3 to the poor quality of components and assembly compared to other strobs same quality.

Tom's review (This content has been automatically translated from French)" To possess."

Contest STB 520
Machine quite satisfactory, despite the rather special internal program (instead of the shield effect in DMX channels).
This is also what prevents the use of the potential effect.

Fairly light compared to other strobe identical but other brands.

Apart from that, the price / quality ratio is good enough, the effect blind (30f / s) is really at the top, despite the fact that it is not as usable as the atomic.

Another negative point, the safety ring on the latest version is really misplaced, it prevents full rotation of the lyre grip, one wonders what happened at that time by the head of the guy who decide to fuck here ..

With experience and the same budget, I would buy the property.
Did you find this review helpful?yesno
»

Contest STB 520
5
I use it for several years mobile disco.
I never had a problem with.
What I love most: His power, the shielding effect and robustness
What I like least: nothing

blueterry's review (This content has been automatically translated from French)

Did you find this review helpful?yesno
»
Read the 9 user reviews on the Contest STB 520 »

Other categories in Lighting