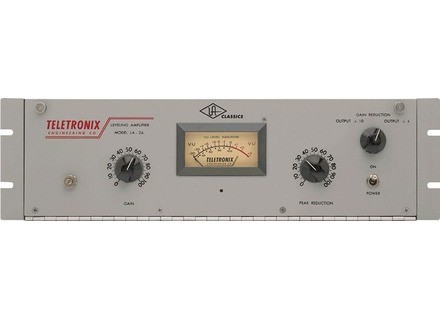 First, we'll go over the basic types of dynamic processors.  Of course you have your compressor, which is probably the most often used dynamic processor, and then you've also got the limiter, the gate, and the de-esser.  While there are more out there I'm sure, for this tutorial I will focus in on these types.  While all of them run on the same principles, they will be used in different situations as each of them do something different.  I hope that this tutorial will help you understand more clearly everything that each of these dynamic processors will do.

To start, let's begin with the compressor itself.  Compressors come in a wide variety of forms and each one is unique with its own parameters and sound.  Some compressors like the Universal Audio Teletronix LA2A (shown in the picture) only have two parameters, while others have tons and tons.  The thing that all of them have in common is that they all have parameters for some type of gain reduction (compression) and gain make up to then boost the signal back up.  Most compressors will also have attack and release parameters which can further help you get the sound that you are after.  While the main reason for using a compressor is to bring up the softer sounds and the lower the louder ones, using compression has become more of an art form rather than a technical one.  Each compressor is unique and I encourage those using them to try different ones out for different things as this is the best way to get better with using compression.

The limiter is probably the second most used dynamic processor.  It has a lot of similar attributes to a compressor, but a limiter will place a hard limit to how loud or soft a signal will get.  Usually, a limiter is used for mastering, but this isn't set in stone as they can certainly be used for mixing as well.  There are endless types of limiters, but most of them are quite simple to operate as they usually have only two knobs like a basic compressor.  The Massey L2007 shown above is one of my favorite limiting plug-ins and it can be tried out free on Massey's website!

While gates aren't necessarily what you would think of when you think of a dynamic processor, it does indeed fall under this category.  In fact, many times you will see a unit that will be a compressor, limiter, and gate all in one and this is because they share similar ideas and qualities.  The gate is useful for a variety of different things as it helps to isolate a sound only when the level reaches a certain point.  For example, if you put a gate on a kick drum and set the parameters correctly, the idea would be to get rid of all of the sounds in between when the kick drum hits.  This is triggered when the signal reaches a certain point and is like a compressor and limiter because it does so.  Gates are seen in all shapes and forms with all different types of parameters and settings.

Lastly, I'd like to say a few words about the de-esser.  A de-esser is basically a dynamic processor that only works within a certain range.  It is really only used on vocals to cut down sibilance that maybe causing peaks.  It basically compresses the high end so that you don't have hard sibilance in the upper frequencies.  I don't use a de-esser for anything other than vocals, but I'm sure that you could get creative with them if you wanted to.  A great version of the de-esser is Massey's model as it has a ton of parameters and can be tried out free like the L2007 on their website.