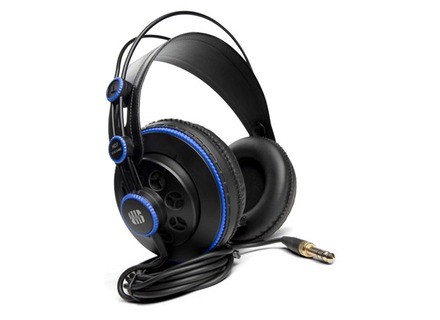 View all offers for PreSonus HD7 »

PreSonus HD7
4
I use it for 8 months. very satisfied.

headphone quite correct to eng or mix, well balanced, and above all closed, preventing any loss sonore.je got bundled with the prosonus usb box and mic.
I am very satisfied that I prefer my speakers.

as above, balanced said.

Shamann's review (This content has been automatically translated from French)" Top notch !!!"

PreSonus HD7
5
Just for the record, I did do a blind test with a electroacoustician DT-770: his preference was directly Presonus (he has also acquired and I believe a good part of his class also ...).
I owned there are some above-mentioned time Sony, which with its serious puffy gave me the final mix that lacked ... I also found that I preferred the largely semi-open side of the HD7 less claustrophobisant in the long run.


Finally, I have the least: the design (this is not the kind of headphones with which to go out in the street ...), the hoop which clamps a bit and headsets plastoc.

What I like most: its linear, clear and dynamic.


In conclusion: excellent quality / price ratio, and yes I would do without hesitation that choice.
40 € there is not any hesitation, this headphone holds a candle to much more expensive models at the expense of comfort. But if you have a tight budget or just need another headphone for comparison, the choice of HD7 is to consider very seriously.

I use this headset for the production of electronic and electroacoustic music, and listening recreational (classical, electro, commercial, jazz ... A bit of everything what!)

Let's be clear on one point: even if it adapts easily to the head and ears with his pads circum-aural, this headphone is much less comfortable to wear than other more expensive models! The plastic earpieces give a little warm in the long run, and I find it too tight despite my "little head."

Strength level nothing to say, it's been over a year since I use it daily, and nothing has changed. Atria, despite the fact that I rarely shave more than once a week, have not moved (the pads of my old Sony MDR-7509 showed signs of tiredness before that ...).

Obviously for that price, no detachable cable or twisted, it's simple right 2.5m. In fact in the box he just jack adapter and a bag of nylon base there.

The performance did not absolutely degraded with time, instead.

After the accumulation of defects, why take the time to write a review you say?

For one simple reason: this headphone is excellent. As surprising as it may seem, this plastic thing questionable aesthetics is surprisingly linear, able to discern all the elements of the music you listen to with uncanny accuracy. The dynamics are also very well transcribed and work percussive sounds is a real pleasure!

Its semi-open design allows you to work without stifling (but may annoy people nearby), and a 32 ohms impedance and transcribed frequencies ranging from 10 to 33kHz, it is able to collect all without flinching, the big beat ultra compressed most finesse of a classical orchestra, even on the headphone output of a portable.

It gives me an excellent monitoring headphones, both for production but also for the work of mixing, in which I made a lot of progress with him. And despite its price, it deserves its suffix "Pro"!

See all 7 photos of PreSonus HD7 »