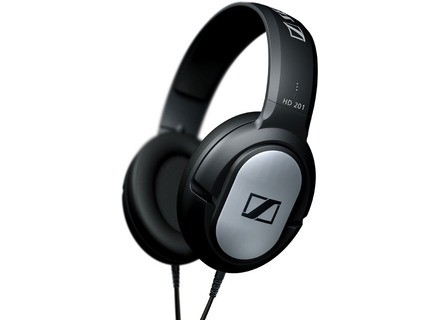 HD 201, Studio headphone from Sennheiser in the HD series.

View all offers for Sennheiser HD 201 »

Sennheiser HD 201
3
The HD 201 has a decent sound but they didn’t appeal to me because the bass was not that good. When playing music that didn’t have deep bass they were not too bad. But when playing bass and low frequency heavy music they didn’t perform well. The bass would get really distorted and would not be clean. Even though the frequency response went down to 21 hz they still didn’t deliver clean enough for me.
They are very comfortable and felt great on my head. I only used them a few times at a local studio. They seemed rather ‘cheap’ to me but that is because they are. They only cost around 25 bucks, most headphones in this price range are not very good at all and will not last that long. I do not see these headphones lasting a long time either. The mids and highs are pretty clean though and were not too sharp or piercing when listening to them but the bass just didn’t do it for me.
They do have a 9 foot cable on them which is great for the price they cost. They are very light and have an impedance of 24 ohms. They do not come with a ¼ adapter nor do they have a “coiled” cable. They cable is straight and the style of them is circumaural. If the bass response was a little cleaner and wider I would think these headphones could be the best headphones under 50 dollars. But because the bass can get sloppy when turned up I would have to say it is better to just go with a cheaper pair of Sony headphones. The bass in the HD 201 sound like the bass in a cheap pair of head phones that can be purchase at any store. If your budget doesn’t allow you to spend more money then look into some of the inexpensive Shure or Sony headphones for a better bass response.

Sennheiser HD 201
3
The thing about the HD201 is that in any of these HD (so called) headphones it seems that you get what you pay for. Plastic made to break. Not used in any PRO STUDIO ROOMS that are serious about your headphone mixes and we are www.chrislieckstudios.com. I think that you need invest more and get a more flat pair of headphones such as the AKG 240's. Again these can't take a great deal of volume without breaking up. This new bread of phones if for more amateur recording. Average at best. These phones have a bump so that if you are recording a vocalist that hears more high mid response it that bump at 50hz or in that basic area will cover up that mix that you need to cut vocals. I like phones to have cuts if anything at that lower frequency so that when you are tracking they vocalist you don't have to have a separate headphone EQ for the singer. I have to do that a great deal with newer so called HD phones. I also like to match phones meaning if I have three pairs of headphones in my studio I want them all to be the same. I don't want to have two singers in the booth and one has a lower volume than that others. Also these phones are not as sturdy as I would like. I have read other reviews of these whereby they state that they are sturdy and I find that the cheaper the headphone the more likely it will break upon impact to the ground. Most singers drop their headphones all the time and the few times these headphones fell I was nervous that they were done. Back to the sound, I was just not that impressed with any one thing with these phones. Isolation was minimum thus drummers would not like them, and the fact that they are not that isolated is not a good thing. We used them just the other day on a drum live session and I had to move to a set of vic firth for the drummer to hear the click drum.
No on the other side my engineer likes them a bit more than I do so I have them an average rating as he likes this line of headphones and he works at the Guitar Center so he gets to hear a great deal of all of the new headphones either before they come out or when they are in the store. Normally I hear from him as to liking a specific set of phones. He will call me and rave about them. I did not get that call on these headphones and the reason we had a pair is s student left them at the studio and we started using them in the C room for a while. The student was mixing on them and never mix on headphones if possible. That is not a great idea for any mixing engineer. I would just invest in good pair that standard producers and engineers like the AKG 240s or any great AKG line that is commonly used by professionals.
Did you find this review helpful?yesno
»

Sennheiser HD 201
3
The Sennheiser HD 201's are a set of headphones, designed for use in the studio. While not the best studio headphones out there, they are still indeed intended for this kind of use and beyond. They serve really as a low end alternative to those who couldn't afford something like the HD 280's. I've used the HD 201's at a home studio where I work pretty consistently with the producer who owns it. We don't normally do bigger sessions in there, but he has two sets of these headphones as extras just in case they're needed. The only use that these will see is for monitoring during recording if there are a bunch of people there who need them. He's got a number of other better pairs of headphones that are the primary headphones for monitoring during recording for both myself as the engineer and the players on the session. While incredibly cheap, the HD 201's still do have the feel of being cheap. They're not the sturdiest headphones and I can see them breaking rather easily, although the ones I've used have worked fine without any issues yet. They're also not the most comfortable headphones, so I wouldn't recommend them if you're going to be doing long studio sessions with them. As far as sound quality is concerned, it's pretty middle of the road here and definitely not suitable really for checking mixes on or anything where critical listening is necessary. The price will certainly drive some people to buy these, and while they're fine as back up pairs, if you're looking for a go to set of headphones it's definitely going to be worth it to spend a bit more money on something like the Sennheiser HD 280's, which I believe are some of the best available in their price range. If you can only spend what the 201's cost, you're going to get what you pay for...
Did you find this review helpful?yesno
»

- What thing do you like most/least about it?
It's cheap & light.
But it's cheap.
Has no bass, no depth, no oomph.
Treble is aggressive.
Very very poor sound isolation from outside noise.
Overall a bad set of earphones.
Fairly comfortable, though.

- Did you try many other models before getting this one?
Nah, went for the cheapest Sennheiser i could find.

- What is your opinion about the value for the price?
Not that impressed, really. Philips does better for the money.

- Knowing what you know now, would you make the same choice?...
Nope. I'd either get a more expensive model or go for a Philips in the same price range.
Did you find this review helpful?yesno
»
Read the 23 user reviews on the Sennheiser HD 201 »