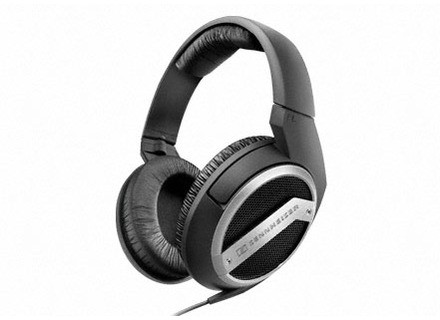 HD 449, Studio headphone from Sennheiser in the HD series.

View all offers for Sennheiser HD 449 »

Sennheiser HD 449
3
How long have you use it?
Almost 2 years

What is the particular feature you like best and least?
PLUS: It does not break my head after several hours of listening (whether physically or musically)
LESS: A response in the bass and low mids that does not allow me to listen properly to the electro ...

With experience, you do again this choice?
I would do this choice only for acoustic or relatively soft music.
He does not accept that it gets too much.
My HD25 is more versatile and neutral, but much more expensive and less comfortable in the long run ...

PS: I am not a sound engineer, and this is only my humble opinion and my feelings, and I'm not omniscient.

What do you use this headset (sound recording, mixing, mastering, live, studio ...)?
This one is just for me to listen.

Its coatings are they nice?
Overall the headset is quite comfortable, I sometimes keep hours non-stop on her head, and I end up forgetting about.

What music do you listen to?
I mainly listen to music that is not too punchy with 449 (although my specialty is that electronic music).

Fits there easily to your head and your ears?
It fits perfectly, it is a circum.

Do you find it tiring during extended wear (headband too tight, holding warm ear)?
As I said above, I sometimes wear several hours straight without any gene. Personally it does not take me too hot (but it remains a closed headphone ...)

The headphone you seem weak or strong?
In appearance, it is very fake and not breathing strength. I would add that the cable is a little cheap (but it is only connected to a single listener).

He has a detachable connection?
No, but it comes with an extension cord.

Its appearance or performance have they deteriorated over time?
Despite use sometimes not at all related so it is designed (I mixed several times with ... when you have nothing else ... it's better than nothing!) Until now it is like new! And I'm probably the most surprised in history!

The audio quality of the headphones you she looks good (serious overall balance, middle, treble, stereo)?
The overall balance is pretty decent considering the price, but we are obviously not in the presence of a monitoring headphones. Serious down cleanly know if the 449 does not clearly likes big kick an electro song, there is not terrible. Mediums emerge pretty good and are not smothered by bass. They do not resonate too much and you feel a slight bump, probably due to the fact that the gear hi-fi today is ... Typically without regard to acute, it's clean without being Crystal clear, it does not sound too much, but there is clearly a bump on some fairly high frequencies, which does however not troublesome. Spatialization is far from spactaculaire, and it is nice to listen to a song recorded in the studio, another recorded live.

You sound level seems too low or too high?
The noise level is not very high, and serious being absolutely not amplified as Beats, the acoustic pressure does not break my head ... Specifically, lovers of big bass that vibrates the tympants and covering mediums, must go their way ... This is not a Beats!

What will become of sound insulation?
The insulation is probably not his biggest strength (especially since I'm used to headphones for mixing or monitoring).

Saru the monkey's review (This content has been automatically translated from French)" Very good headphone, versatile for any style of music!"

Sennheiser HD 449
5
In short, a headphone that sends wood, I can highly recommend if you type in the Sennheiser!

It is very comfortable with headphones around your entire ears for most of the people, no inconvenience has been listening and extend the headband adjusts to any type of skull and adapts to any the head (Proven through trying it with friends).
I think its very sleek and attractive design, it is not too big on your head and can be used on the street without it be too obvious I think.
Regarding the sound is versatile with all types of music "Rap, Pop, Classical, Rock Hard Metal and especially I listen especially.

I buy the Sennheiser HD 449 there is now almost 2 years and I'm not tired. It is strong, still no defect in the hoop, foam and more.

Regarding the sound is versatile with all types of music "Rap, Pop, Classical, Rock Hard Metal and especially I listen especially, headphone insulates of its surroundings.