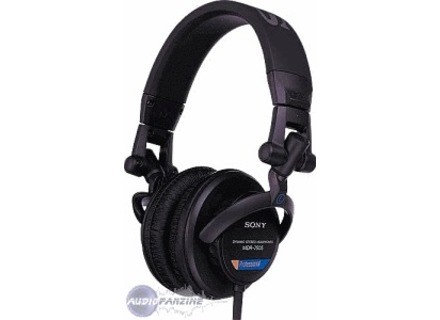 MDR-7505, Studio headphone from Sony in the MDR series.

FloydianBen's review (This content has been automatically translated from French)

Sony MDR-7505
3
I invested in this headphone wanting a headset, and also a headphone for night play on my synth Yamaha S90. Purchase in December 2008.

As a whole the headset is beautiful, it covers both ears, comfort is nice for a while, but after a few hours, it relies a bit on the head.

First listen, lots of bass ... The ear gets used to the long, upper spectrum is nice. Plugged into my synth, there comes disappointment, the very present bass transform sound into a real yogurt. Impossible to work on the lower half of the keyboard and whatever sounds.

I think therefore change this headset shortly ... shame
Did you find this review helpful?yesno
»

Angus_fr's review (This content has been automatically translated from French)

Sony MDR-7505
4
Bandwidth: I do not know anymore!
I've had six months and have to pay about 1000fr
At first I was frankly impressed with the quality, making any tests of listening to mp3 on my pc "undernith it all" to "no doubt" of the snare drums slapped dry! bluffing!
I used to listen to music on the speakers on my pc (no shit nonplus) but then I went back to listen as a kid who discovers music. Mainly I used to mix my home stud, it is very neutral so well adapted.
I'm not sure I would do this choice because everyone owns the air to the 7506 instead, so I asked to listen to.
Did you find this review helpful?yesno
»

fredG's review (This content has been automatically translated from French)

good headphone semi-closed ... not to save!

trs analytical (or almost any means ... hurt sometimes, but it made for !!!)... lacks a little bass for those who like or need ...

for other ... some fun and a nice quality production!

more, something better, that's clear!
Did you find this review helpful?yesno
»

Atesta's review (This content has been automatically translated from French)

Sony MDR-7505
5
I use the past year.
This is a headphone neutral, color, perfect for monitoring and at an unbeatable price. Unlike headphones "non-pro" is often much more expensive and the sound flattering.

I tried some other models. No comment ...
I remake that choice many times, but my next one will be 7509.

Although he is semi-closed, it can be used for recording provided to listen to a reasonable level. One of its strengths is its strength. I lugs around outside without a problem. Sony provides a perfect cover to protect it from external aggressions (!) Supplied with detailed fitting of the headphone.

PS: Do you enjoy not open two jack-minijack adapter: having weakened, he was trapped in the headphone jack of my mbox ... I can only find a second adapter or buy a headphone.
Did you find this review helpful?yesno
»
Read the 10 user reviews on the Sony MDR-7505 »