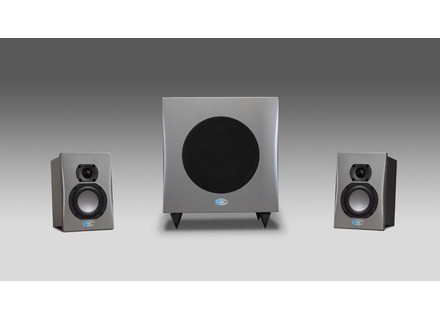 ohmface's review (This content has been automatically translated from French)

Blue Sky MediaDesk 2.1
5
The system while a
I use it for my unquement as monitoring station computer music

Rponse curve is linear with a rev prcis very serious. There is no problem for rgler the box (and god knows how I could galrer with caissons, all abandoned my way)

The sound is extremely prcis, rather surgical and out of the firebox presonus a little too steep my taste.

I use it for three months and I am very happy (I am considering the move to kit 5.1)
I tried small Genelec and Tannoy Reveal and I & r prf blue sky
against by comparison with my stereo system (McIntosh 2205 + Tannoy Berkeley - coaxial 38) is cruel, the tannoy prcise but are just as much musical (with the blue sky I have a guitar signal perfectly equilibrated acoustic and with my tannoy sound of a guitar)

I think however that the report trs good quality price.
Did you find this review helpful?yesno
»

hervet1's review (This content has been automatically translated from French)

Blue Sky MediaDesk 2.1
5
Speakers + subwoofer has motivated my choix.je for use solely in the mix of my songs.

The frequency curve is great and the image stereo.le sound is crystal clear that I n "had never known avant.une superb dynamic condition does not push the son.ce is normal in any mix of interest push the technical specifications son.Quelles motivated your choice?

1mois.je since I have never heard a sound as precis.ce you hear the mix is ​​the same thing you find in your car or in your chain hifi.le subwoofer was not an addition it is part of all because all filters are in caisson.ce that does not for other marques.j have had a long history of MSP5 yamaha 8040 and has seen much genelec.rien superieur.les studio to luna states are equipped with these enceintes.cette trade mark is not known in France but I think it's the price Ref. no concurrency.

todterre's review (This content has been automatically translated from French)

Blue Sky MediaDesk 2.1
5
Small enough light monitors that could store his office, ideal size what? not too big not too small ...

For $ 800 Canadian (because am from quebec) you have the subwoofer included ... it's not like the KRK 8 "rp-8 at the same price no sub ... not the whole kit for that price. .. fantastic!
with the posibility of 5.1 when I switch to a larger studio
it's perfect .... not need to buy two times ...
Did you find this review helpful?yesno
»

CNek's review (This content has been automatically translated from French)

- Neutral: My limited knowledge does not allow me to judge, this is my first Systm monitoring (APRS of old hifi HRIT forcment is so much more neutral
Stereo-Image: I sup the box to induce a blur in the bottom of the image spectrum in Stereo, but nyet, the human ear can only see the fire below 100Hz
- Precision: I'm in my room, not amnage consquence or treats, but a cost of proximity prsager leaves great potential for these monitors, no problem of phase or stationary waves, at least I do not jump to the ears
-Dynamic attacks slamming, no thundering other test I've ever monitor ... good note, I notice now the default mix, over the compression, reverb tail of the artifact OGG, WMA and MP3 as Describes some sites (but they do not affect that dynamics, Obviously).

-Duration of use: Since no more than a week, running PERIOD
'I like: the finish, despite the criticism or mixed lgrement dfavorable internet I find that Aesthetics is commonplace, dismal, but who cares ... I spend my time watch my box or my monitors. The main thing is the quality of the matrial, and they are well made, connections, heaters and other dtails are treated, we would have an AIM tlcommande or in- minus-one on / off switch on satellite (sucks to go under the desk to SAVE qq watts per year, every day).
Qualitprix-Report: Unbeatable ... you make the dub, electronics, or "better" hardtek hardcore, audiovisual (its image) in a system that the box of this price is a bargain.
- Repeat this choice? plutt twice a ...

PS2: this opinion is that of a beginners in the computer music (less than a year) but still mlomane and musician, not audiophile (who cares ?)...
Did you find this review helpful?yesno
»
Read the 5 user reviews on the Blue Sky MediaDesk 2.1 »