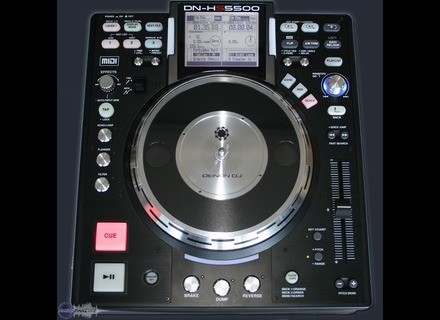 JimboSpins's review"Plenty of effects and features, all at a great price"

Denon DJ DN-HS5500
5
The Denon DN-HS5500 is a turntable and controller that has a screen built into it with high quality functions. This unit is like having two separate decks. It has an independent dual deck function that has separate outputs for audio. Both decks can be controlled easily just by hitting a switch. This deck works great in Serato and Traktor (which are what I used it in), but it will work with just about any software application you want to use it with.
The platter is very good, it is a high torque direct drive motor that will last a long time. If you are the type of DJ that really likes to perform then this is the right console for you and your set up. The audio outputs are clean and sound great as well as the headphone out, it is very loud making it easy to get your next song ready to mix in.
Setting up this console did take a little more time, mainly because I was not familiar with all of the functions of it and I spent some time just messing around with it. The manual does come with it though I didn’t take much time to read through it.
This controller supports MPC and WAV audio formats and can work with a Mac or a PC. This controller has a USB audio soundcard in it and an internal power supply. There are 5 built in effects (DSP), tail echo, flanger, and filters are some of them. There are three platter effects too, reverse, dump and brake. The display screen on this controller is almost 4 inches big and it is very easy to read making it perfect for a club setting. Other units that I have used that have similar functions as the Denon DN-HS5500 cost about 100 to 200 dollars more than it does so it is a huge bargain!

- Pros: - Dual deck concept. I hesitated before buying it because

I wasn't sure about its practicality but it works really

- The tray!!! You can place a vinyl record on it and the sound emulation sounds very good.

- The possibility to mount a HDD in the device.

- Cons: - Bugs but they will be removed by the next

update (in one month).

- Denon Music Manager which is not very practical to use.

- I previously owned two DN-S 1200 (very good value for money) and I' don't regret having changed them for this, especially considering the rotating plate. I also had ICDX (they are toys), Cortex HDC 3000 (avoid them), Denon DND-4000 (good).

- The value for money is excellent considering it's a dual tray device!! Cheaper than a CDJ-1000, even with the 250GB HDD, the Asio and Midi sound card and the plate! I personally think Denon made a quantum leap with this product.

UPDATE: after eight months of use.

lots of bugs have not been removed yet:

- First and foremost the Music Manager:

The search engine is also exasperating. I'd prefer an

itunes-like browser. Music Manager's search engine is not ergonomic at all.

The dual decks concept is NOT RELIABLE for live mixing, even after

upgrading, I still have pitch stability problems when I toggle between both decks, or

when I enable the echo/loop effect. The most irritating thing is that

you usually need to switch decks or start a loop

when you start the second song. And then the first song (or loop) changes

a demo!). Worst of all is that there is no way to know when it will happen!

There are still other smaller problems which are unnerving:

- DSP effects are not reseted when you disable them

- buttons are not reliable (I would prefer aluminum buttons, especially for cue points.

After several months of use you'll have to depress them quite hard to make sure they are activated).

- You have to use the wheel to set DSP effects.

- some functions are useless: mirror mix, next file, hot list,

filter. It would be better to have more cue points and, as I already said, dedicated buttons instead of the

wheel (but that's a matter of taste).

As a summary, the product has no major problems but I'm fed up of waiting for bug fixes. That's the reason I lower the mark from 9 to 7.

I wouldn't buy it again if they don't fix these bugs.
Did you find this review helpful?yesno
»

kaloid's review (This content has been automatically translated from French)

+ 2deck in 1: c super efficient and really easy to use
+ Direct drive: a vinyl

kan even the hard drive would be provided for that price,
komme say that it is needed a ke!!

Exprience with, you will do again this choice? ...

without hesitation, the ease of use is incredible (due to mp3)
Did you find this review helpful?yesno
»
Read the 9 user reviews on the Denon DJ DN-HS5500 »