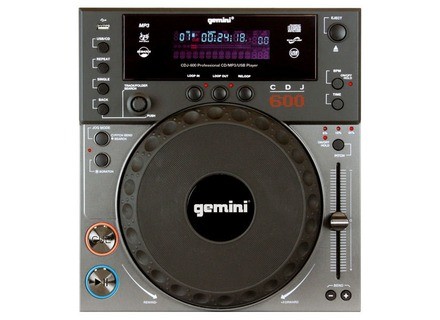 <strong>What thing do you like most and least?
</strong>
<strong>Plus:</strong> It's pretty and it's still shitty plastic

<strong>Cons:</strong>
-there is play everywhere, even on the set, which often blocks the way ...
-there was white when you press the PLAY button, reactivity is zero
-meter BPM which is useless ... it displays 57 BPM on good techno / trance rhythmical
-she reads CDs that half the time, do not talk with a USB key ... 35 seconds to read a track !!!! abused !!
-the scratch mode sucks, a creaking door looks like, no kidding
-I struggled several times to skip to the next track
-I did not besion to go further, because the list is long ...

An American Audio ProScratch 2, which is far better, and cheaper especially, as the prize is not everything

<strong>How would you rate the quality / price?
</strong>
Big scam !!!! 300 euros is theft, how Gemini can sell such a thing?
<strong>With experience, you do again this choice? ...dropoff Window</strong>

With the little experience I have, of course not, 5 minutes of horror (er, test, sorry) largely enough for me to pack up quickly this plastic thingy (also notice that ad Gemini 2.8 kg, I think we can divide by two to get the actual weight and thus get an idea of ​​the components used)
Here, however, I'm only 14 years, imagine what a pro would have thought of that "platinum"
It was my Christmas present, and I have already handed in the box, I'm really disappointed, and I'll try to make me share against something worthwhile, like RMP1 Reloop whose reputation does is more to do.
Come on, I put 1/10 because it can play a track when he feels like it
<strong>ABSOLUTELY AVOID !!!!!!!!!!!! WORTHY OF A PRODUCT Koolsound !!!!</strong>
Did you find this review helpful?yesno
»

Toiinus's review (This content has been automatically translated from French)

* Did you tried many other models before acqurir?
No, I mix before with Hercules Dj Console (assisted by VDJ) is not at all the same thing

* What is the particular feature you like best and least?
Most: His look, his usb plug, She read MP3
Cons: I do not see but can be the BPM counter that displays only 3 good figure but hey dj mixes unmetered bpm

How do you report qualitprix?
Very good did paas of pio pio-but I think for the price of 300 euro no better

* With experience, you do again this choice?
With the same budget yes
Did you find this review helpful?yesno
»

djsysteme's review (This content has been automatically translated from French)" insufisant"

Gemini DJ CDJ-600
1
this plate aged very badly after a year that it has already beugai lalumage over the cue point is not at all accurate navigation in a USB key is a true battlefield
Did you find this review helpful?yesno
»

emeric.arrigoni.7's review (This content has been automatically translated from French)

Gemini DJ CDJ-600
1
So I'll let go and criticize this crap! No, but seriously what is this?
I said it's one year that I bought at the beginning is that I saw it that I WANTED to, and no other, at the time I was young and ignorant and several people told me not to buy it but the I was stubborn and I wanted it to! (The scam!) It is impossible to mix with it! Scratch is the shit, the music is too fast can the plate plant, the sound is not high enough the plate plant, JOG made a terrible noise, some days or not even want it read a USB key!

I personally observed this deck badly because I'm really disappointed and I sincerely regret my choice! My rating: 8/20 No more! I put 8 because the only advantage is that the USB port is near a bed all right but it is like it is when it does work!

That for me is that I think I ever takes GEMINI!

Did you find this review helpful?yesno
»
Read the 12 user reviews on the Gemini DJ CDJ-600 »