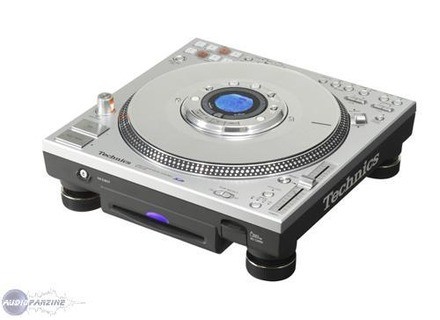 Technics SL-DZ1200
Got my technics sl-dz1200's on ebay and bough these sensei haus discs right after cause one of my decks was missing a platter these are a great product I recommend them to anyone who owns these decks got the blue high quality vinyl too.
Did you find this review helpful?yesno
»

Technics SL-DZ1200
1
(Originally written by emdeecuts/translated from Audiofanzine FR)
I've been using it for about... one month and I bought it secondhand.

In short, it's true it's absolutely great!!!! sublime.... It's fully made out of metal and it's heavy!

However, a short time after buying it I noticed a problem during play back:

You can hear a slight noise when the plate is rotating (due to the rotation speed) and it even affects the audio signal's quality.

It's almost like a scratched vinyl record!!! (this problems occurs both with burned AND original CDs!)

And my MP3 tracks are not recognized anymore by my player...

I probably made a mistake buying it secondhand. Now I have a player which is not even 2 years old and I cannot use live because of its hideous sound.

I'm still waiting for Panasonic's after-sale service to get back to me but I'm not optimistic...

I'll update this review as soon as I get information from the after-sale service!

MDC
Did you find this review helpful?yesno
»

Technics SL-DZ1200
4
Feature-wise it's not the most packed CDJ around, it's clear that Techs focused on producing the ultimate vinyl emulator (suceeded) with striking looks (suceeded) and some gimmick thrown in for marketing sakes (suceeded). I'm not talking about &quot;quantity&quot; but rather &quot;quality&quot;, or should I say &quot;selection&quot;, as IMHO the age and day of perfect vinyl emulation are over. Extra features in a CDJ are a pretty much settled down criteria nowadays: every gimmick, add on, whatever, having been tested by the manufacturers and users alike quite a good lot. But more on that later, let's get to the list: loop in/out with exit/ reloop; 4 hot cues; in/out editable sample bank with 4 slots, both located at the top left of the faceplate; effects aplenty, SD card reading, reverse toggle switch and the striking 12&quot; rotative platter with strobe light and dotted borders just like doc ordered (yeah like the MK2). And oh, the slot-in feeding of CD... nice!

A major let down right from the go: the sound suffers miserably (and I mean it!) when the Pitch Lock (otherwise known as Master Tempo or Key Correction)is applied. Even in the +/- 8% (the lowest pitch setting, the others being 16, 33 and 50%), a lousy delay and sound distortion is audible, specially when pitching down. Doesn't matter though, it's so bad it could ruin a mix, least say being played out and loud in a powerful sounsystem! I mean, c'mon, every manufacturer has come around such sound matters & bugs at this point and I can't see how Techs and Motorola would pass that up in their first attempt at the CDJ game - this is a top player and the MT bug is a top no-no, not exactly a perfect match. I would have expected more. Anyway... The overall sound quality is good, with phat bass and clear frequencies throughout the spectrum. The sound manipulation when in vinyl mode is impressive - just stay away from the higher pitch ranges and the MT!!! Boo!

I sure like the feeling of vinyl on a CDJ, so much so I always use the VINYL mode on the Pio's when I'm playing out, but other things have become more and more important in my sets when it comes to digital manipulation of sound. As I said before, my take on the CDJ thing is: the focus is not (or should not be) at vinyl emmulation anymore, that's sorted out and overhyped enough. For me, the game is now at expanding the digital capabilities with real-life usable features that work as they should. The simple ones actually, features that set appart turntables and CD players. Like adjustable, editable, accurate looping; wide, precise, versatile pitching, ranging from + to - 100%, that's mandatory IMHO; precise, fast and easy-to-use hot cueing... And the Techs has almost none. The loop is as basic as the one found on the CDJ500 of old, without even the loop out adjustment, the pitch has odd and close ranges and no 100% wide, it has no pitch bend but the ones you'd have on a regular turntable (that is touching the side of the platter or using the pitch to slow down/speed up). The effects are bellow par, with both selection and usability suffering. No wet/dry mix, and you have to select the effect live, meaning you go thru the menu of effects to pick your choice when cueing or you'll do it with the sound up. I'd fault the effect sound too, other manufacturers like Numark did much, much better on their attempts, this simply doesn't sound good, period. That turns it into a gimmick, and one I'd gladly exchange for, say, adjustable in/out loop, a wide 100% pitch range or maybe even a better sounding MT. Maybe I'm too picky, but fact is I didn't like the effect bank - it's weak and falls short, you better off with a dedicated efx unit or a decent DSP on a mixer. I also had my gripes with the looong loading/unloading times, the odd cueing and the too-smooth pitch rule that turned pitch-bending and thus beatmatching into a tricky job somethimes. Many times... and hey, never, ever touch the top of the platter to speed up or slow down it's just too oversensitive, you might get lost into your mixing quite easily!

Tough build throughout: aluminum casing, coiled feet just like on the Techs TTables; solid platter; tight, precise and backlit main buttons, butter-smooth pitch (sometimes too smooth), slot-in CD feeding... it feels solid throughout, as I would expect from Technics. I can't lay comment on durability as I did a short term test. Besides the usual home mix-a-lot, I took it to a few real-life situations (clubs and gigs) and it held its own pretty fine, just one of the feet coming out all the time but it was an easy fix. I would trust it in a club, but we have to see how it performs in long-term or even under heavy use and abuse.

It is a paradoxx I know but many a DJ would have that exact feeling about the beloved Technics SL MK2 turntable too. As much as I disliked many of the DZ 1200's features - it's a rather flawed CD player in many areas including sound and design - I felt incredibly secure and confident and in fact came to enjoy the experience of playing with it right from the first time. It's that &quot;the whole comes up as more than the sum of the parts&quot; saying, it applies once again to this piece of kit. Its flaws sure detract from the quality and the sound bug when in MT are a major factor to me, but still it's a joy to play with and mess around. And it's a big attention drawer for sure, everyone into DJing or not, even my dog and my bird, liked its look and the spinning platter. Cool factor 10! But if you're looking further for a CD player that has features to expand your digital capabilities to the maximum, maybe another deck such as the unbeatable Pio CDJ100Mk2 or a Denon or maybe even the Numark would be a better bet. Every DJ can make wonders on such a feature-filled CD player, just give it sometime and amazing tricks will float up. The quality is up there with the best, but it takes more than that IMHO and there is no limit when it comes to digital manipulation of the sound these days, it's a tough game and I have my coins on other players.

Originally posted on FutureProducers.com
Posted by: Unknown ( 1-, 2005)
Did you find this review helpful?yesno
»

Technics SL-DZ1200
4
Hella lot missing. the effecte are boo-boo. wish it had the effects of the numark cdx. u have to buy that sd memory card thats kinda cheese. i spent my last dollar on these things. no i gotta buy a memory stick 2? damn!!!!!!!

sound quality is good 2 go. it can also depend on ya mixer

the usability is great. the reasons i got the sl dz1200 is because they are more of a challenge rather that the numark cdx. its the exact replica of the sl 1200.

i havnt had them long enough to really comment on the durability. ive heard negative fee backs on them but not like the numarks cdx. no repaire yet although im waiting for one

i love em. for a challenge get the sl dz1200. if yer lazy get the numark cdx, for great effects get the pioneer cdj1000. all and all id stay wit the technics

Originally posted on FutureProducers.com
Posted by: djStickd ( 4-, 2006)
Did you find this review helpful?yesno
»
Read the 23 user reviews on the Technics SL-DZ1200 »